After an absence of more than 50 years, the swift fox has returned to the grasslands of the Fort Belknap Indian Reservation in Montana. From Sept. 12 to 20, the Assiniboine (Nakoda) and Gros Ventre (Aaniiih) Tribes of Fort Belknap released 27 swift foxes in collaboration with the Smithsonian Conservation Biology Institute, Defenders of Wildlife and World Wildlife Fund (WWF), kickstarting a five-year swift fox reintroduction program.

The swift fox is the latest extirpated species to return to Fort Belknap, joining other iconic prairie species successfully reintroduced to tribal lands under the leadership of the Fort Belknap Fish and Wildlife Department. Historically, swift foxes lived across much of North America’s Great Plains.

“Along with buffalo and endangered black-footed ferrets, swift foxes are now back where they belong,” said Harold “Jiggs” Main, director of the Fort Belknap Fish and Wildlife Department.

The goal of the program is to establish a self-sustaining population of swift foxes on the Reservation. For the September release, 27 swift foxes were translocated  to the Fort Belknap Indian Reservation from an existing, robust and healthy population in Wyoming following trapping coordinated by Fort Belknap, the Smithsonian and Little Dog Wildlife with assistance from the Wyoming Game and Fish Department.

Fort Belknap and the Smithsonian will continue trapping, with Defenders of Wildlife support, until they reach a minimum of 40 swift foxes, the ideal amount needed to establish a viable population according to models. An additional 40–50 foxes will be trapped in Colorado and Kansas during the second and third years and translocated to Fort Belknap for reintroduction. If needed, the population will be augmented with additional animals in years four and five from Colorado and Wyoming.

The Fort Belknap Fish and Wildlife Department and the Smithsonian Conservation Biology Institute will oversee the monitoring of reintroduced foxes over several years to ensure the species’ successful reestablishment. Community outreach and engagement, supported by the American Prairie Reserve, is also part the swift fox reintroduction program.

“We’ve been preparing for this reintroduction for the last two years and it’s finally here,” said Hila Shamon, research ecologist at SCBI. “The data we collect will add so much to our understanding of swift fox ecology and be a lesson for reintroductions of other small carnivores globally. This release is a major milestone in true conservation partnership.”

To track movement post release, each swift fox will be fitted with a GPS collar that will collect and transmit locations three times daily. The 57-gram collars, 3% of total swift fox body weight, feature a degradable screw and will drop off after approximately one year. Smithsonian scientists will also use cameras equipped with infrared triggers, or camera traps, and DNA analysis to monitor the spread of the swift fox population and population growth over time. Blood and fecal samples collected ahead of release will help scientists identify individual foxes and confirm offspring—the hallmark of a self-sustaining population. Camera trap data and ongoing fecal collection at strategically placed scent posts will also confirm swift fox presence. Students from Aaniiih Nakoda College and Clemson University will assist the Smithsonian with ongoing data collection in the field.

“The tribes of Fort Belknap are leaders in wildlife restoration to the Great Plains,” said Chamois Andersen, Rockies and Plains senior representative at Defenders of Wildlife. “The swift fox will join many iconic prairie species, including buffalo, sage-grouse, prairie dogs, and black-footed ferrets, contributing to the incredible biodiversity found on this landscape. It is an honor to work with the Nakoda and Aaniiih tribes and our other partners to accomplish this important work.”

Swift fox numbers declined precipitously in the late 1800s, mainly due to poisoning intended for coyotes and wolves and the loss of grassland habitat. During this same time they were also eliminated from the northern portion of their range. Swift foxes made a comeback after successful reintroduction efforts began in 1983 in Canada and on the Blackfeet and Fort Peck Indian Reservations in Montana. However, these reintroduced populations have yet to reconnect with populations in the southern portion of their historic range. Establishing a population of swift foxes on the Fort Belknap Indian Reservation will expand the species’ occupied range in the north and help bridge the distribution gap between existing populations to the north and south.

“When we work together with partners in government, science and academia, we can accomplish so much more for the species we care about,” said Kristy Bly, black-footed ferret restoration manager at WWF. “Restoring this culturally and biologically important species to the Fort Belknap Indian Reservation will help recover swift foxes in the northern portion of their range.”

Made possible by the Assiniboine (Nakoda) and Gros Ventre (Aaniiih) Tribes of Fort Belknap, the swift fox reintroduction program is led by the Fort Belknap Fish and Game Department and the Smithsonian Conservation Biology Institute with core support from the American Prairie Reserve, Bureau of Indian Affairs, Defenders of Wildlife and WWF.

The Smithsonian’s National Zoo and Conservation Biology Institute leads the Smithsonian’s global effort to save species, better understand ecosystems and train future generations of conservationists. As Washington, D.C.’s favorite destination for families, the Zoo connects visitors to amazing animals and the people working to save them. In Front Royal, Virginia, across the United States and in more than 30 countries worldwide, Smithsonian Conservation Biology Institute scientists and animal care experts tackle some of today’s most complex conservation challenges by applying and sharing what they learn about animal behavior and reproduction, ecology, genetics, migration and conservation sustainability to save wildlife and habitats. Follow the Zoo on Facebook, Twitter and Instagram.

Defenders of Wildlife is dedicated to the protection of all native animals and plants in their natural communities. With over 1.8 million members and activists, Defenders of Wildlife is a leading advocate for innovative solutions to safeguard our wildlife heritage for generations to come. For more information, visit Defenders.org/newsroom and follow us on Twitter @Defenders.

World Wildlife Fund (WWF) is one of the world’s leading conservation organizations, working in nearly 100 countries for over half a century to help people and nature thrive. With the support of more than 5 million members worldwide, WWF is dedicated to delivering science-based solutions to preserve the diversity and abundance of life on Earth, halt the degradation of the environment and combat the climate crisis. Visit www.worldwildlife.org to learn more and keep up with the latest conservation news by following @WWFNews on Twitter and signing up for our newsletter and news alerts here.

American Prairie Preserve’s vision is to create a vast and collaboratively-managed prairie destination that serves as a fully functioning ecosystem for wildlife, and offers visitors permanent access to the landscape that shaped our nation’s character. When complete, the Reserve will be larger than Yellowstone and Glacier National Parks combined, and will support wildlife species that historically called the Great Plains home. Already open to the public for recreation including camping and hunting, the Reserve offers visitors an opportunity to connect with nature on a truly grand scale. Learn more at americanprairie.org. 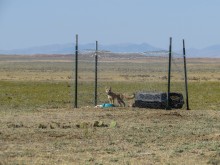 Restoring America's Wild Prairie
Smithsonian scientists are collaborating with the American Prairie Reserve to protect and restore one of North America's greatest treasures — the prairie.
Swift Fox Recovery
Smithsonian scientists, in collaboration with the Fort Belknap Fish and Wildlife Department, are embarking on a five-year swift fox reintroduction project to restore swift foxes to tribal lands and to help reestablish connectivity between disjointed swift fox populations.