Animal care staff at the Smithsonian Conservation Biology Institute (SCBI) are mourning the loss of two rare species—a cheetah and an Eld’s deer. The 10-year-old cheetah, a female named Miti, was humanely euthanized March 11 for renal failure. Hoofstock keepers discovered Rhudy, a 4-month-old Eld’s deer, deceased in his enclosure after he ran into a barrier and broke his neck.

Miti arrived at SCBI in 2013 from the Fossil Rim Wildlife Center in Texas. At SCBI, Miti contributed 11 surviving cubs—a very rare occurrence—to her species’ survival. She gave birth to six cubs Nov. 12, 2013, and five cubs March 28, 2017, and keepers describe Miti as an exceptional mother. The two litters are significant because they marked the second generation of cheetahs born at SCBI, extending the branches of the breeding facility’s cheetah family tree. SCBI is home to 26 cheetahs—14 males and 12 females. It is part of the Cheetah Breeding Center Coalition—a group of 10 cheetah breeding centers across the United States that aim to create and maintain a sustainable North American cheetah population.

Miti began showing signs of illness Feb. 26. Keepers noticed that she was not eating all of her regular diet, signaling a decrease in appetite. On March 7, Miti showed a greatly reduced appetite and was lethargic. Because of her rapidly declining condition, lack of response to treatment and care, and laboratory tests that supported renal failure, veterinarians and keepers elected to humanely euthanize Miti. A full necropsy report, which could provide more information about the underlying cause of her renal failure, is expected in the coming weeks. The median life expectancy for a cheetah in human care is 8 to 12 years old. Cheetah longevity in the wild is 6 to 8 years.

Cheetahs live in small, isolated populations mostly in sub-Saharan Africa. Many of their strongholds are in eastern and southern African parks. Due to human conflict, poaching and habitat and prey-base loss, there are only an estimated 7,500 to 10,000 cheetahs left in the wild. The International Union for Conservation of Nature considers cheetahs vulnerable to extinction.

Rhudy was born Oct. 28, 2019, at SCBI. Initial necropsy reports showed evidence of a cervical fracture, which indicates that something may have spooked Rhudy and caused him to run into the enclosure’s barrier. The maximum recorded lifespan of a male Eld’s deer in human care was 16 years. Females can live up to 20 years in human care. Eld’s deer’s longevity in the wild is unknown.

SCBI is home to nine male and 17 female Eld’s deer. Scientists are studying their reproduction and creating a self-sustaining population in human care with the help of animal keepers. SCBI is one of three institutions in North America accredited by the Association of Zoos and Aquariums that breed the endangered species. In the wild, the approximately 1,500 animals remaining are hunted for their hides and impressive antlers, and their grassland habitat in Southeast Asia is severely fragmented. As a result, they are at a risk of inbreeding and losing genetic diversity—making a healthy population in human care important for the species’ survival.

Headquartered in Front Royal, Virginia, SCBI facilitates and promotes veterinary and reproductive research as well as conservation ecology programs based at Front Royal, the Smithsonian’s National Zoo and at field research stations and training sites worldwide. Its scientists are leaders in applying advanced biomedical approaches, including assisted reproductive technologies and germplasm cryopreservation, for enhancing the demographic and genetic diversity of endangered species. 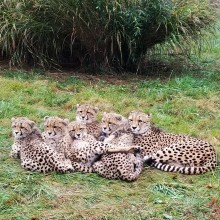