Ungulate keepers at the Smithsonian Conservation Biology Institute (SCBI) are mourning the loss of two elderly American Bison, a male named Ten Bears and a female named Kicking Bird, who were humanely euthanized May 14. They were both 22 years old. The median life expectancy for American bison is about 15 years of age.

For more than a year, ungulate keepers and SCBI veterinarians have been managing age-related declines in Ten Bears and Kicking Bird’s health. Both bison had limited vision and advanced osteoarthritis. Their discomfort often increased with rising temperatures, particularly during the summer. Despite treatments, these conditions progressed to a point where they affected the animals’ overall quality of life. Because they lived together for almost their entire lives, Ten Bears and Kicking Bird were socially bonded as a pair. The animal care team felt that the death of one bison would leave the other unduly stressed. Given the pair’s declining quality of life, poor prognosis and concerns about the impact of separation to their social welfare, animal care staff elected to humanely euthanize both bison.

Ten Bears was born at the Buffalo Zoo April 25, 1998, and Kicking Bird was born at the Lehigh Valley Zoo June 18, 1998. In May 1999, they arrived at the Smithsonian’s National Zoo and were exhibited at the Prairie Trail. Bison were among the first animals in the Zoo’s collection when it was founded in 1889, and their arrival commemorated the return of this species to the facility. The Zoo bestowed the honor of naming the bison on an employee who was of Native American heritage. He selected the name Ten Bears—a reference to the principle Chief of the Yamparika part of the Comanche—for the male and Kicking Bird—a reference to the High Chief of the Kiowa—for the female.

When the Zoo made plans to build what is now the giant panda exhibit on Asia Trail, animal care staff transferred Ten Bears and Kicking Bird to SCBI. They arrived in Front Royal, Virginia, Aug. 11, 2004. Although they did not breed, during their years at the Zoo they served as ambassadors for their species, teaching staff, scientists and visitors about the nature and biology of American bison.

Ungulate keepers fondly remember the bison as two giants who seemed to enjoy grazing in their large pasture. Ten Bears, the leader of the pair, was a quiet, lumbering giant according to keepers. He was a bit more standoffish than Kicking Bird, who had a more curious personality and seemed to enjoy visits from keepers and visitors.

The International Union for Conservation of Nature (IUCN) lists American bison as a species that is near threatened by extinction; IUCN does not consider commercial herds in designating population status. Bison have made a comeback since their populations were decimated to just 375 individuals, but the species still depends heavily on conservation action for survival. Today, about 30,000 individuals comprise the conservation herds. Approximately 500,000 are managed as livestock by private commercial ventures. 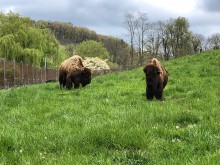