The Smithsonian’s National Zoo is celebrating the birth of two endangered golden lion tamarin infants. The monkeys were born June 29 to first-time parents Mo and Izzy and appear to be healthy. They have been clinging to their mother Izzy’s back since birth, but they will soon transfer to their father, Mo, who will carry them at all times except when they are nursing. At about 5 weeks old, the infants will begin to explore their habitat on their own and at 3 months old will wean. Golden lion tamarins are social animals, and the family will move around their exhibit as a group. Keepers are allowing the family group to bond. Veterinarians will perform exams, and determine the sex of the two infants when they are older.

There were once as few as 200 golden lion tamarins left in the wild, but through a number of conservation measures and breeding programs, like the Association of Zoos and Aquariums’ Golden Lion Tamarin Species Survival Plan (SSP), the wild population has now grown to 3,200. Izzy and Mo were recommended to breed by the Golden Lion Tamarin SSP, but currently no tamarins are being released to the wild.

Native to South America, golden lion tamarins are social primates which live in groups of two to eight family members in the canopies of Atlantic coastal forests of southeastern Brazil. Their reddish-gold fur and mane gives them a striking appearance. Golden lion tamarins have high infant mortality rates, with approximately half of infants dying before they reach 1 year old. Keepers will continue to monitor the infants closely to ensure that they are healthy and developing normally. 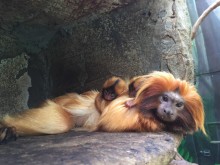 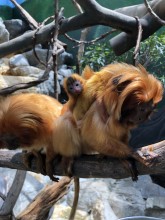 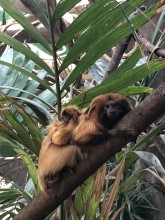 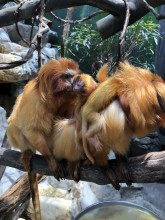