The Birds Are Candidates for Release to the Wild Next Year
Nov. 30, 2017

The Smithsonian Conservation Biology Institute (SCBI) in Front Royal, Virginia, hatched two Guam rail chicks earlier this month. The hatchings are a boon for the species, which is currently classified as “extinct in the wild” by the International Union for Conservation of Nature (IUCN), although there are small populations that have been released on Rota and Cocos Island. The tiny chicks, covered in black downy feathers, hatched Nov. 14 and are the first surviving clutch for their parents. They are candidates for release to the wild and will travel to Guam sometime next year.

“It is extremely rewarding to see these two chicks hatch,” said Erica Royer, bird keeper at SCBI. “We worked really hard to introduce their parents to each other and to help them raise their chicks. Luckily, all of our work paid off and these two chicks will be living in the wild soon, which is our ultimate goal.”

The chicks’ parents were recommended to breed by the Association of Zoos and Aquariums’ Guam Rail Species Survival Plan (SSP). The female had moved to SCBI from the San Diego Zoo, but she had never successfully raised chicks. The male is an experienced parent, and keepers hoped that by pairing them together both would successfully care for chicks. They were slowly introduced during the summer, and keepers monitored their behavior extremely closely. They displayed affiliative behaviors toward each other and eventually began foraging for food together and spending time near each other. Soon after, they laid their first clutch of eggs.

Keepers intervened to care for the chicks for several days after they hatched to increase their chances of survival. The first few days after Guam rail chicks hatch are critical. During the last days of incubation, the remainder of yolk sac that provided the chick with nutrients in the egg is drawn into the body and provides the hatched chick with nourishment, but that nourishment only lasts for one day after hatching. If parents do not begin caring for their chicks immediately, they likely will not survive. Initially, keepers fed the chicks chopped meal worms and meat twice each day. By the time the chicks were 3 days old, they had started gaining weight and keepers reduced the feedings to once each day. When the chicks were 4 days old, keepers determined they had gained an ideal amount of weight, indicating that the parents were properly caring for them and they no longer needed human intervention.

Within the next two weeks, the chicks will lose their downy feathers and their brown plumage will come in. When they are 1 month old they will become independent from their parents. In the meantime, they will remain as a family group to simulate the social structure that exists in the wild.

The two chicks are easiest to tell apart by size. One chick is larger and more assertive when seeking out food, while the other chick is slightly smaller and cautious. Keepers will know the sexes of the chicks after a genetic analysis of samples of their feathers.

In 1984, the last 21 Guam rails were captured in Guam to start a breeding and recovery program in human care. The invasive brown tree snake has since extirpated them from the island along with eight other native bird species. The snake remains a challenging predator in Guam. Guam rails have been officially classified as “extinct in the wild” by the IUCN since 1994, but small populations have been released on Rota and on Cocos Island since 1989. Both islands are currently free of brown tree snakes.

SCBI received the first Guam rails to be transferred out of Guam for the breeding and recovery program in 1985. All Guam rail chicks hatched at SCBI are slated for repatriation to Guam and eventual reintroduction to the wild. SCBI breeds the birds according to recommendations from the SSP. The SSP makes breeding recommendations to preserve as much genetic diversity in the small population as possible. In September 2017, SCBI staff traveled to the Commonwealth of the Northern Mariana Islands to release two females born at the facility as part of a larger release by the Guam Department of Aquatic and Wildlife Resources. In total, 49 Guam rails were released, and it marked the first time in 32 years that there were more of the birds living in the wild than in human care. There are approximately 200 Guam rails living in the wild and 116 living in human care. 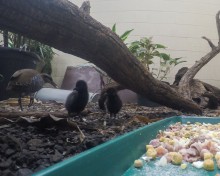