The Great Cats team at the Smithsonian's National Zoo is celebrating a conservation victory. The Zoo's female Sumatran tiger, Damai, gave birth to two cubs Monday, Aug. 5. The cubs appear healthy, and keepers have observed Damai grooming and nursing them.

It's taken more than two years of perseverance getting to know Damai and Kavi and letting them get to know each other so that we could reach this celebratory moment, said Craig Saffoe. All I can do is smile because the team has realized our goal of producing critically endangered tiger cubs. Damai came to us as a young tiger herself, so it's really special to see her become a great mom.

Keepers and veterinarians began monitoring Damai closely in June after she began gaining weight and exhibiting behaviors that indicated she could be pregnant. Staff trained Damai to participate in ultrasound procedures, which allowed them to confirm her pregnancy June 21. Keepers prepared for the arrival of cubs after Damai became restless and began showing signs that she would soon give birth. This is Damai's first litter of cubs, sired by the Zoo's 12-year-old male tiger, Kavi. The two bred several times from December 2012 through mid-April of this year.

Keepers are remotely monitoring Damai so she can have time to bond with her cubs. The cubs will not be on exhibit for several months until they have completed a series of health exams and received all necessary vaccinations. Damai and the cubs will go outside on exhibit together once the Great Cats team determines they have acclimated to the yards. Kavi will be on exhibit as usual.

Tiger fans may be able to watch the newborn tiger cubs at the National Zoo reach every milestone for the next several weeks via live webcams on the Zoo's website. Damai has the choice of moving her cubs to dens in the indoor tiger enclosure that do not have webcams. If she chooses to move them, they may not be visible on the webcam. Viewers can toggle between two webcams in the cubbing dens. During the next few weeks the cubs will open their eyes, become more mobile and potentially even start to explore the other dens that Damai can access.

Damai arrived at the Zoo in April 2011 from the San Diego Wild Animal Park and Kavi arrived one year ago from Zoo Atlanta. The Zoo received a recommendation to breed the two from the Association of Zoos and Aquarium's Sumatran tiger Species Survival Plan. They were introduced to each other slowly over the course of six months. At first they could see and smell each other but not touch each other. Keepers decided to give Kavi and Damai the opportunity to spend time together in the same indoor enclosure after many months of visual introductions. They bred several times over the past six months, most recently in April when Damai became pregnant.

Sumatran tigers are listed as critically endangered by the International Union for Conservation of Nature. It is estimated that between 400 and 500 exist in the wild. There are 65 Sumatran tigers living in accredited zoos in North America in addition to these cubs.

For decades, the Zoo's Smithsonian Conservation Biology Institute scientists have been recognized as global leaders for their work in tiger-range countries in Asia helping to protect tigers in the wild. In just the past two years they have co-hosted training courses for teams of frontline conservation practitioners. The course participants spent time both in the classroom and in the field, learning to use state-of-the art law-enforcement monitoring systems, and about tiger biology, law-enforcement, illegal trade and how to work with local communities. 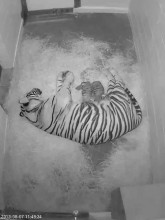