For the first time at the National Zoo, veterinarians detected something new during an ultrasound procedure this morning on giant panda Mei Xiang. They believe it is a developing giant panda fetus. Based on the size of the fetus, which is about four centimeters, veterinarians estimate that Mei Xiang could give birth early next week, or possibly in early September. In past years, veterinarians have only detected changes to Mei Xiang's uterus, which occurs for both a pregnancy and pseudopregnancy. Historically, and since Aug. 7 of this year, Mei Xiang declined participating in ultrasounds at this stage, so it was a surprise when she responded to the panda keepers' calls this morning.

There is a substantial possibility that Mei Xiang could resorb or miscarry a fetus. Scientists do not fully understand why some mammals resorb fetuses.

The Zoo's panda team is monitoring Mei Xiang through the Zoo's panda cams. She is continuing to spend more time in her den, sleeping more, body licking and cradling objects - all behaviors consistent with a pregnancy or pseudopregnancy.

Today, we are cautiously optimistic," said Dennis Kelly, director of the Smithsonian's National Zoo. "We want a healthy cub for all the right conservation reasons. I am excited, but I have to say that we were prepared for a cub even before this morning's ultrasound. Our expert team of keepers, scientists and veterinarians are going to do exactly what they are trained to do and I'll just ask everyone to remain positive with us."

Reproductive scientists from the Smithsonian's National Zoo and Conservation Biology Institute (SCBI) artificially inseminated Mei Xiang April 26 and 27. For the first time, scientists used semen collected from a giant panda named Hui Hui (h-WEI h-WEI). He lives at the China Conservation and Research Center for the Giant Panda in Wolong and was determined to be one of the best genetic matches for Mei Xiang. A cub by Mei Xiang and Hui Hui would be very genetically valuable, helping to preserve the genetic diversity of the panda population in human care.

The sample from Hui Hui was frozen and flown from China to the cryopreservation bank at the National Zoo. Scientists also used high-quality fresh semen collected from the Zoo's male giant panda, Tian Tian (t-YEN t-YEN), for the artificial inseminations. DNA analysis will determine the sire of the cub.

SCBI scientists confirmed that a secondary rise in giant panda Mei Xiang's urinary progesterone levels began July 20. This signaled that Mei Xiang would either have a cub or experience the end of a pseudopregnancy within 30 to 50 days.

At that time, Mei Xiang also began exhibiting behaviors consistent with pregnancy or pseudopregnancy. She started nest building, chose to spend more time in her den, slept more and ate less. In the past week, she also spent time body licking and cradling toys. The panda team expects Mei Xiang to spend almost all of her time in her den for the next several weeks. The David M. Rubenstein Family Giant Panda Habitat will close completely until further notice to provide quiet for Mei Xiang. She will continue to be visible on the panda cams. Visitors can also see Tian Tian and 2-year-old Bao Bao (BOW-BOW), in their outdoor enclosures and on the panda cams. With the support of Friends of the National Zoo volunteers who operate the panda cam, the panda team will begin the 24hour watch.

Mei Xiang has given birth to two surviving cubs: Tai Shan (tie-SHON) and Bao Bao. Tai Shan was born July 9, 2005, and he now lives in China. Bao Bao was born Aug. 23, 2013. She will live at the Zoo until she turns 4; at that time, she will also go to live in China and, eventually, enter the giant panda breeding program. Tai Shan and Bao Bao were born as the result of artificial inseminations.

Bao Bao will turn two this Sunday, Aug. 23. Interested visitors may watch her receive a frozen treat in her outdoor yard at 10 a.m.

The Zoo will continue to provide daily updates on Mei Xiang through its @SmithsonianZoo Instagram account using #PandaStory, and the Giant Panda e-newsletter. 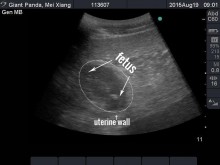