Keepers had an opportunity to weigh the 4.5 week-old giant panda cub yesterday, Sept. 21, when Mei Xiang left her den to eat. He weighs 2.95 pounds (1,339 grams) and has now surpassed both of his older siblings in size when they were the same age. At 4-and-a-half weeks old, Bao Bao weighed approximately 2 pounds, and Tai Shan, weighed 2.6 pounds (1,181grams).

Saturday, Sept. 19, the cub reacted to the sound of a door moving, which indicates that he can now hear. His eyes are still closed, which is normal. Keepers and veterinarians expect them to open in the next two to four weeks. 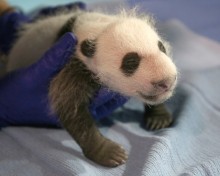