For the first time in nine years, primate staff at the Smithsonian’s National Zoo and Conservation Biology Institute are celebrating the birth of a male western lowland gorilla. He was born at 6:25 p.m. April 15 and is named Moke [Mo-KEY], which means “junior” or “little one” in the Lingala language. The parents — 15 year old mother Calaya and 26-year-old father Baraka — bred in summer 2017 following a recommendation from the Association of Zoos and Aquariums’ Species Survival Plan (SSP). Animal care staff have observed Calaya nursing the infant who has been clinging closely to his mother, and they are cautiously optimistic that the newborn will thrive. Animal care staff are leaving Calaya to bond with and care for her baby without interference. The Great Ape House is closed to provide Calaya a quiet space to bond with her infant.

In fall 2017, animal keepers confirmed that Calaya had successfully conceived using a common human pregnancy test. Because the team trained Calaya to participate voluntarily in ultrasounds, they have been able to monitor fetal growth and development throughout the pregnancy. The Zoo announced her pregnancy Nov. 3 and since has provided updates on Calaya via Facebook, Twitter and Instagram using the hashtag #GorillaStory. It will continue to share updates, photos and videos of the infant as news breaks.

“The birth of this western lowland gorilla is very special and significant, not only to our Zoo family but also to this critically endangered species as a whole,” said Meredith Bastian, curator of primates. “The primate team’s goal was to set Calaya up for success as best we could, given that she is a first-time mother. Doing so required great patience and dedication on the part of my team, and I am very proud of them and Calaya.”

As part of the preparation for all possible scenarios, staff have been acclimating Calaya to the experiences of motherhood to enhance the likelihood she will care for her infant. Animal keeper Melba Brown noticed that Calaya learned best by watching the other gorillas train and repeating those actions. This breakthrough helped Brown bond with Calaya and gain her trust. The gorilla quickly mastered basic husbandry behaviors, which formed the basis for more complicated maternal training, including ultrasounds, urinating on cue for hormone analysis and breast manipulation for lactation assessments and nutrient analysis. Brown helped to reinforce Calaya’s maternal behaviors by presenting her with photos of mother gorillas and giving her a plush gorilla toy to gently touch and kiss. Brown also trained Calaya to present her chest so keepers could place the plush gorilla up to her breast to “nurse.”

“This infant’s arrival triggers many emotions — joy, excitement, relief — and pride that all of our perseverance in preparing Calaya for motherhood has paid off,” said Brown. “We will provide support to her if need be, but I have every confidence that Calaya will be a great mom to Moke. I am excited to see how he will fit into the group dynamic. There are a lot of different personalities in this family troop, but they all work well together.”

Gorillas live in groups, called troops, that are typically composed of a silverback male, one or more blackback males, several adult females and their infant and juvenile offspring. Calaya resides in a mixed-sex gorilla troop with Baraka, an adult female named Mandara and a sub-adult female named Kibibi. Silverback brothers, Kwame and Kojo, live together in a bachelor troop. In the event that Calaya was unwilling or unable to care for her infant, keepers prepared Mandara, an experienced mother of six, to act as a foster mother as a precaution. Previously, Mandara raised Baraka as a foster offspring shortly after his birth.

Native to Africa, western lowland gorillas live in the forests of Gabon, Central Africa Republic, Cameroon, Angola, Equatorial Guinea and Congo. The International Union for Conservation of Nature lists the western lowland gorilla as critically endangered due to disease and poaching. Scientists estimate that in the past 20 to 25 years, the number of wild western lowland gorillas has decreased by 60 percent. If the infant is healthy and thrives, Calaya and her infant will be on exhibit when the Great Ape House reopens, but Calaya will have a choice of rooms, some of which are out of public view. Visitors can see the Zoo’s other gorillas — Baraka, Mandara, Kwame, Kojo and Kibibi — and meet a great ape keeper to learn about the fascinating world of gorillas at 11:30 a.m. daily. 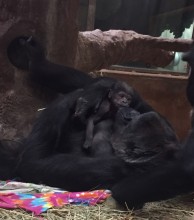 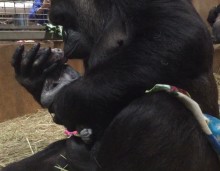