Primate keepers at the Smithsonian’s National Zoo are mourning the loss of Sydney, a white-cheeked gibbon who was humanely euthanized Feb. 4. He was 20 years old. The median life expectancy for this species is about 30 years. Gibbons in human care often live to be 40 years or older.

Sydney was diagnosed with hypoglycemia in August 2018. Since that time, animal care staff had been closely managing his condition by providing a specialized diet, administering medications via one of his favorite foods, banana, and monitoring his blood glucose level. To measure Sydney’s blood glucose levels throughout the day, primate staff trained him to use a glucometer. On the keepers’ cue, Sydney would present his foot, and they would take a quick prick of his toe with a diabetic lancet. For his voluntary participation, Sydney received quartered grape pieces as a reward. The glucometer measurements gave staff valuable information about his blood glucose levels throughout the day, allowing them to adjust his diet and medications as needed.

Several weeks ago, keepers noticed that Sydney was showing increased lethargy and a decrease in appetite, both behaviors that were out of the ordinary. On Feb. 2, veterinary staff transported Sydney to the Zoo’s veterinary hospital, where they anesthetized him and performed a full physical examination. The exam did not uncover the underlying reason for the behaviors he was displaying. Following recovery from anesthesia, Sydney returned to his habitat at Gibbon Ridge. In the days that followed, his appetite continued to wane and he refused to take the medications that would keep his blood sugar at an appropriate level. Due to Sydney’s poor prognosis and declining quality of life, animal care staff made the decision to humanely euthanize him. A final pathology report will provide more information in the coming weeks.

Sydney was born at the Zoo Oct. 13, 1999 to his mother Siam and father Ralph. Many Zoo animals participate in the Association of Zoos and Aquariums’ Species Survival Plan. The Gibbon SSP determines which animals to breed by considering their genetic makeup, health and personality, among other factors. The Zoo has had a long history of success breeding white-cheeked gibbons; since 1973, 23 infants have been born and survived at Gibbon Ridge. Sydney was paired with two females—Mae and Tuyen—at separate times during his life, but he did not sire offspring with either of them. For more than 20 years, Sydney served as an educational ambassador for his species, teaching primate staff and countless zoogoers about the behavior and social nature of white-cheeked gibbons.

Following Mae’s death in April 2013 and Tuyen’s death in Oct. 2017, animal care staff discussed whether to bring in a new companion for Sydney. In addition to hypoglycemia, he had experienced tremors on the right-side of his body since September 2013. As a result of this condition, Sydney had decreased motor function. In addition to conducting routine training sessions with him, keepers encouraged Sydney to keep physically and mentally sharp by providing him with a variety of enrichment items, such as puzzle feeders, in areas that were accessible for him.

Given Sydney’s compromised mobility, restricted diet, and complex health concerns, primate staff decided that having to compete with an exhibit mate for food, enrichment and keeper attention would not have had a positive impact on his quality of life. Although he did not physically share a space with his siamang neighbors, Bradley and Ronnie, the trio would often sing together and interact through the mesh barrier of their enclosures.

“Sydney was a shy animal, so it was special to earn his trust and receive his ‘happy hoots’ when we walked in the building,” said Emily Bricker, primate keeper at the Zoo. “Despite Sydney’s condition and his physical limitations, he was a very feisty individual. He would often play chase with his keepers, swiftly following us as we passed by his enclosure. Since Sydney’s previous companions passed away, we provided him with extra toys, training sessions and opportunities to interact with us to ensure his social needs were met. We were happy to spend some extra time with him, and it seemed the feeling was mutual.”

Gibbons are best known for their vocalizations—loud, complex duets that are used to defend territories, announce location and maintain pair bonds. These small apes are highly adapted to living in the forest canopy. Native to China, Vietnam and Lao People’s Democratic Republic, white-cheeked gibbons are considered critically endangered by the International Union for Conservation of Nature. Populations have declined by more than 80 percent over the past 45 years due to habitat loss and fragmentation.

Zoo visitors can see siamangs Bradley and Ronnie at Gibbon Ridge. In winter, they are on exhibit on sunny days when the weather is above 40 degrees Fahrenheit. 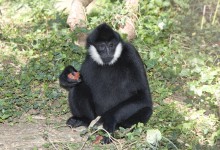