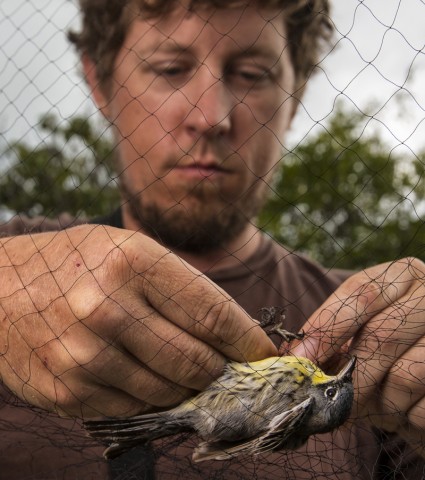 Nathan Cooper is a behavioral ecologist and conservation biologist. He studies how migratory birds interact with each other and their environments throughout the annual cycle. His research integrates natural history observations with new technology, quantitative tools, and large-scale field experiments to advance the fundamental understanding of ecology and provide resource managers with the information needed to conserve migratory birds. Cooper collaborates closely with his colleagues at the Smithsonian Migratory Bird Center and Georgetown University, and with species and habitat managers at the U.S. Fish and Wildlife Service, U.S. Forest Service, the Michigan Department of Natural Resources, and the Bahamas National Trust.

Cooper is primarily focused on the ecology and conservation of the Kirtland's warbler. He is currently involved in several science- and conservation-based projects with this recently delisted species. Cooper is broadly interested in better understanding each period of the Kirtland's warbler full annual cycle (i.e., wintering, breeding, migration, post-breeding) and how they are linked through seasonal interactions.

By collecting data across the whole annual cycle, his research is quickly moving toward developing a full annual cycle integrated population model, which can be used to better understand year-round population dynamics in Kirtland's warblers and other migratory songbirds. Cooper also has several management-focused projects aimed at reducing conservation reliance and improving population monitoring in Kirtland's warblers. In addition, he recently began a multiyear project that will explore non-lethal methods to control merlin populations to protect the endangered piping plover population in the Great Lakes.

Cooper earned a bachelor's degree in fisheries and wildlife in 2003, a master's degree in biology in 2008, and a doctorate in ecology and evolutionary biology in 2014. He first joined the Smithsonian Migratory Bird Center as a Ph.D. student in 2008, became a postdoctoral fellow in 2014, and was promoted to research ecologist in 2020. In his spare time, Cooper enjoys spending time with his family, rock climbing, canyoneering, cycling, landscape photography and reading science fiction novels. He lives in Washington, D.C.