On Earth Day 2014, the Smithsonian's National Zoo and Conservation Biology Institute launched the "Endangered Song Project," an analog-meets-digital outreach campaign that asked 400 participants to help raise awareness about the fact that there are only 400 Sumatran tigers left in the wild. We partnered with Atlantic Records' indie band Portugal. The Man to distribute a previously unreleased song titled "Sumatran Tiger." The song was lathe-cut onto 400 custom poly-carbonate records designed to degrade after a certain amount of plays. These records were sent out to influencers—music industry, celebrities, bloggers, policymakers, tech industry influencers and wildlife conservationists.

With no other copies in existence, the 400 participants were asked to digitize and share the song through their social channels with the hashtag #EndangeredSong. The song will go extinct unless it's digitally reproduced. The Sumatran tiger will go extinct unless we take action. "Breeding" the song socially will help raise awareness about the critically endangered Sumatran tigers and need for conservation efforts.

Limited edition t-shirts are still available for purchase. Call 202.633.0126 to place your order. 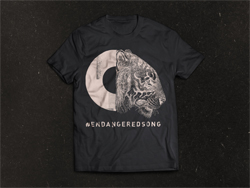 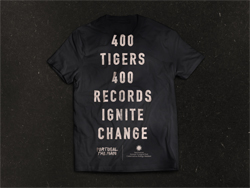