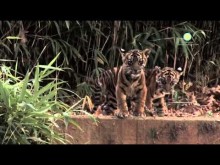 The largest species of cat in the world, tigers are powerful hunters with sharp teeth, strong jaws and agile bodies. They range across Asia from Russia all the way to the Sumatra and Indochina. Researchers still have much to learn about these beautiful, critically endangered, solitary cats.

There is currently one recognized species of tiger, Panthera tigris. Scientists have further classified the tiger into nine subspecies: the extinct Bali, Caspian and Javan subspecies, and the living Malayan, Sumatran, South China, Indochinese, Bengal and Amur (or Siberian) subspecies. Of these six subspecies, AZA-accredited zoos currently manage three: Amur, Malayan and Sumatran. The Smithsonian's National Zoo is home to Sumatran and Amur tigers.

Tigers have reddish-orange coats with prominent black stripes, white bellies and white spots on their ears. Like a human fingerprint, no two tigers have the exact same markings. Because of this, researchers can use stripe patterns to identify different individuals when studying tigers in the wild. Tigers are powerful hunters with sharp teeth, strong jaws and agile bodies. They are the largest terrestrial mammal whose diet consists entirely of meat. The tiger's closest relative is the lion. In fact, without fur, it is difficult to distinguish a tiger from a lion.

Size
Tigers are the largest cat species in the world, and the Amur tiger is the largest subspecies with males weighing up to 660 pounds (300 kilograms) and measuring 10 feet (3 meters). Sumatran tigers are the smallest subspecies, maxing out at 310 pounds (140 kilograms) and 8 feet (2.4 meters). Female tigers of all subspecies tend to be smaller than their male counterparts.
Native Habitat

Historically, tigers existed throughout much of Eastern and Southern Asia, as well as in parts of Central and Western Asia and the Middle East, surrounding the Caspian Sea. Their range has diminished significantly as human populations have expanded. It is believed they currently occupy just 7 percent of their historic range.

Presently, tigers are found in a variety of habitats across South and Southeast Asia, China and Eastern Russia. They thrive in temperate, tropical or evergreen forests, mangrove swamps and grasslands. Amur tigers are primarily found in Far-East Russia, although there are small populations across the border into China and potentially North Korea. Sumatran tigers are found only on the Indonesian island of Sumatra. A tiger's range within these regions is determined by the availability of prey.

Despite their solitary nature, communication is a very important part of tigers' behavioral ecology. They communicate through vocalizations, such as roaring, grunting and chuffing, and through signals, such as scent marking and scratches on trees. Tigers are fiercely territorial animals, so these signals are particularly important to communicating where one tiger's home range ends and another's begins.

Tigers are solitary ambush predators that rely on stealth and strength to take down prey. These apex predators primarily hunt large ungulates, such as wild boar and deer, but are also known to consume monkeys, buffalo, sloth bears, leopards and even crocodiles. When tigers are found in close proximity to humans, they may also feed on domestic animals, such as cattle or goats. Tigers are adept swimmers and have even been recorded hunting in the wild.

These powerful cats hunt primarily at night, using sight and sound to identify prey. Their striped coats help them blend into their surroundings, where they lie in wait for prey to pass by. At the opportune moment, tigers pounce on their prey, take it to the ground and finish the kill by breaking or biting the neck. Tigers hunt about once a week and consume as much as 75 pounds (34 kilograms) of food in one night.

At the Zoo, tigers eat ground beef, and their diet is supplemented with enrichment items each week. They receive knucklebones or cow femurs twice a week and rabbits once a week to exercise their jaws and keep their teeth healthy.

Tigers are solitary creatures, except when mating or raising young. Cubs stay with their mothers until they learn to hunt successfully, usually at about 18 to 24 months old. They reach full independence after two to three years, at which point they disperse to find their own territory. Female tigers often remain near their mother's' territory, while males disperse farther from home.

Female tigers reach sexual maturity between age 3 and 4. Males are sexually mature at about 4 or 5 years old. Mating can occur at any time of year but most often takes place during cooler months between November and April. Tigers are induced ovulators, which means females will not release eggs until mating occurs. Gestation lasts approximately 100 days, and females give birth to between one and seven offspring at a time, averaging between two and four cubs. Once cubs become independent, at about age 2, females are ready to give birth again. However, if a female's offspring do not survive, due to causes such as infanticide or starvation, she is able to conceive another litter right away.

The life span of tigers in the wild is usually between 10 and 15 years. In human care, or on rare occasions in the wild, a tiger can live up to 20 years. However, approximately half of all wild tiger cubs do not survive past the first two years of life. Only 40 percent of those that reach independence actually live to establish a territory and produce young. The risk of mortality remains high for adult tigers due to their territorial nature, which often results in direct competition with conspecifics, or members of the same species.

Globally, tigers are considered an endangered species. Only six of the nine tiger subspecies that once existed remain, and the South China tiger is thought to be nearly or entirely extinct in the wild. The Sumatran subspecies is listed as critically endangered on the International Union for Conservation of Nature's Red List, and the Amur is listed as endangered. All tigers are protected under CITES Appendix I.

It is generously estimated that only 3,900 tigers exist in the wild, including approximately 200 to 400 Sumatran tigers and 360 Amur tigers. The Smithsonian's National Zoo participates in the Species Survival Plan for Sumatran and Amur tigers, which works to responsibly breed and manage tiger populations within AZA-accredited institutions throughout North America.

The goal of the SSP is to sustain a population of the three manage tiger subspecies—Amur, Sumatran and Malayan—that is genetically healthy enough to maintain a high genetic diversity for the next 100 years.

There are numerous threats to tiger survival, including human-animal conflict driven by human overpopulation, poaching for use in traditional medicines and the destruction and fragmentation of habitat. Human-animal conflict stems from two primary issues. The first is a rise in agriculture and overgrazing by farmers, which drives away typical prey for tigers and forces them to hunt livestock.

The second is urban sprawl and the encroachment of towns and cities into tiger territories, which displaces the cats and leads to killing by humans provoked by fear. These conflicts are not unique to Asia and are common as humans encroach upon the territory of large predators around the world. In the U.S., cougars in the western parts of the country have faced similar threats.

The demand for tiger bones and other body parts used in traditional Asian medicines is also contributing to the tiger's decline. Despite the work of many governments and scientists to decrease demand by educating the public about other sources for these "medical" compounds, an illegal market for tiger parts persists. In some areas, tiger farming has become a profitable illicit market.

For decades, Smithsonian Conservation Biology Institute scientists have studied tigers to understand their behavioral ecology and the most effective ways to protect them. They support efforts to stop poaching and trafficking, reduce human-tiger conflict, improve management practices in tiger habitats and protect Asian forests where tigers live.

In collaboration with USAID and local partners in Bangladesh, SCBI scientists are collecting and analyzing a wide range of field data on tigers, prey and mangrove habitat, including through camera-trap studies to estimate tiger populations. To support and assist management of this project, rangers are trained and given equipment to patrol the forest to prevent poaching and mitigate human-animal conflict.

Smithsonian efforts to save tigers began in 1972 with the Smithsonian-Nepal Tiger Ecology Project. In the 1990s scientists began approaching tiger conservation as a complex problem stretching across borders, requiring the cooperation of many partners.

In 2008, the Smithsonian Institution joined the World Bank Group and the Global Environmental Facility to launch the Global Tiger Initiative, designed to stabilize and restore wild tiger populations to save the species from extinction. As a member of the GTI, SCBI scientists work with policy makers and practitioners across Asia and around the world to save tigers.

At the Tiger Summit in St. Petersburg, Russia, in 2010, leaders of 13 tiger-range countries met with international science and conservation experts, including SCBI scientists, to do what had never been done before: create a comprehensive strategy to save tigers. At the Summit, they adopted the first-of-its-kind Global Tiger Recovery Program (GTRP). Simultaneously, SCBI staff worked with individual countries to develop National Tiger Recovery Priorities.

As part of the GTRP, the Smithsonian prepared a Global Support Program in Capacity Building and Knowledge Sharing through regional training programs in Asia and Core Learning Programs on conservation best practices. They have held courses and workshops for frontline practitioners in protected tiger-range areas, training hundreds of rangers, foresters and habitat managers to adopt the latest conservation and Spatial Monitoring and Report Tool (SMART) patrolling practices, with a focus on preserving and increasing wild tiger populations.

SMART patrol training courses have been held in Thailand, Nepal, Indonesia and Malaysia. Using state-of-the-art techniques, the training has helped create more effective measures against wildlife poaching and the illegal trade and trafficking of live tigers and tiger parts.

There is still much to be done to protect tigers from going extinct. Their future relies heavily on the protection of habitat within their range, which overlaps with areas of significant and continued human population growth. Continued partnerships between governments, conservation organizations and communities will be essential to the long-term protection of this species.

Non-invasive DNA
Scientists can learn a lot about an animal just from the things it leaves behind, such as hair, feathers, feces, saliva or shed skin.

Damai gave birth to a male Sumatran tiger cub on July 11, 2017. The cub was later transported to the San Diego Zoo Safari Park to live with another young male tiger.

Where to find the Tiger