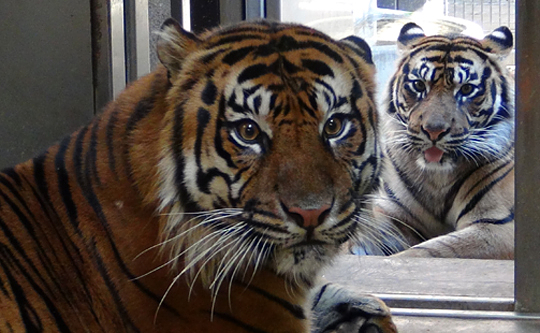 Let me start by thanking everyone on behalf the staff here at Great Cats for the outpouring of sympathy and kind wishes we received on the loss of our girl, Soyono. You made a very difficult time much easier to bear and we appreciate it more than we can say. We had the opportunity to spoil her during her last days and she received lots of her favorite treats. The weather cooperated, and she was able to enjoy time outside right up to her last day. The staff at the Department of Nutritional Resources (the "commissary" to their friends) really came through and Soyono spent her last night working a HUGE meat covered beef bone. She loved it! Everything went smoothly and her end was peaceful, surrounded by the people who loved her.

On a happier note, Guntur is doing very well in Japan. The keepers at Zoorasia in Yokohama have been great about keeping us posted on how he is doing. He and his girlfriend Deru have been introduced! After months of gradually getting to know each other through a mesh door called a howdy gate, Deru and Guntur finally got to meet face to face. We've been told that they are getting along well, but she scolds him sometimes. So far they have not successfully bred, but it's early days and neither Deru nor Guntur has bred before. Sometimes these things take a little practice.

Speaking of which, we have introduced Damai and Kavi as well! They have had visual access to each other for months now and have shown great interest and no animosity. The decision was made to put them together during the first estrus cycle she had after Thanksgiving. Damai must have read our minds because she showed signs of cycling the Saturday afterwards. We waited a couple of days to be sure, then gathered all the keepers together for the big introduction. When we first do an introduction we have everyone available there with hoses and carbon dioxide fire extinguishers, as well as people manning the doors so that we can try and separate the cats if things turn ugly. If you have ever heard house cats mating, you know that it can be difficult to tell between things going well and things going badly. This can be true with tigers as well, only much louder.

The big day came and we were all ready. Damai and Kavi were in adjacent enclosures with the howdy door in between. They were looking at each other and chuffing and just generally giving off a friendly vibe. We moved the door a little to give them some warning of what was about to happen and then opened the door. Boy was Damai surprised! Remember when you were a kid and the high diving board at the pool looked like so much fun until you got up there and then it just looked, well, high? This was kind of like that. Apparently Kavi looked like more fun when the door was closed. Kavi approached slowly, and Damai lost her nerve and hid under the bench. Over the next few days they had some interactions, only a couple with snarling and only one that caused us to intervene. Kavi had a couple of small "dings" on him and Damai was unscathed. Since he has about 80 pounds on her, he could really hurt her and it is a testament to his patience and restraint that he is the only one that's the worse for wear after their encounters.

We have been continuing with some very low-key intros for them, even though Damai is no longer in heat. We are hoping that this will help her become more trusting of him in time and that this will lead to successful a breeding in the future. She is still very friendly towards him (when the door is closed!) so we are optimistic that nature and her hormones will win out over her very understandable caution. We'll keep you posted!