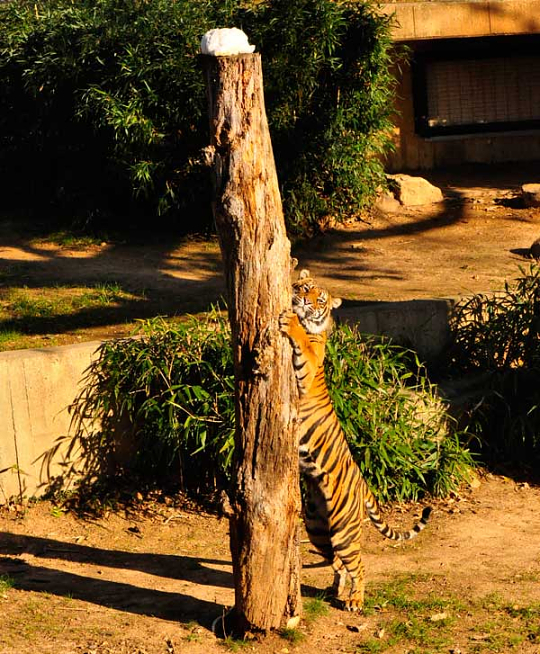 Having grown up in San Diego, Damai is experiencing her first real winter this year. We are glad that so far the weather has been relatively mild. Visitors often ask if we put the cats out in the winter. While Sumatra doesn't have the cold weather that we have here, our Sumatran tigers do adapt to the colder temperatures. Their coats become much thicker, and we are able to let them have some outside time almost every day. There is a written protocol outlining temperatures, but we also rely heavily on the same system that everyone's mother uses: Namely the "If I'm cold you need to put on a sweater" rule. We factor in the wind, sunshine, age of the animal, and which yard we would use, as well as the number on the thermometer before making a decision. With an older animal like Soyono we are much more conservative than with her five-year-old son Guntur. The dens in the yards have heat panels in them that radiate warmth, and we put a deep bedding of hay in at least two of the dens so that the tigers can snuggle down and stay warm while enjoying a little fresh air.

A couple of weeks ago, Leigh and I put Damai's rabbit up on a tree limb. Each of the various cats in the Zoo get a rabbit for dinner on Mondays, big ones for lions and tigers, small ones for smaller cats such as caracals and fishing cats. The rabbits arrive frozen from a supplier that specializes in prey animals for exotic species. We thought that putting a favorite treat in a difficult to reach place would make it even more exciting.

We let Damai out in the yard and ran over to the window so see how she would solve the problem of food up a tree above her head. To our surprise her first order of business was a swim! She walked directly out the edge of the moat, turned around and lowered herself into the water. The air temperature was about 40 degrees, and I have no idea what the water temperature was but it certainly was not a day at the beach! She stayed sitting in the water with her front paws on the edge of the moat calmly looking around for several minutes before getting back out. She did eventually get the rabbit down from the tree with no difficulty, but all the keepers could talk about was her unseasonal swim. Perhaps she wants to join the Polar Bear Club, whose members take an icy dip in the ocean on New Year's Day.

Since she didn't find the rabbit in the tree too challenging, we tried something more difficult. There are large logs in the yards that are stuck down into holes so that they remain upright. They are for the cats to use as scratching posts. There is one that is about 11 feet high, so we tried putting her rabbit on top of that. No problem! It took her a while to figure out just where it was—she could smell it but not see it. She was patrolling her yard checking to see if any strange new tiger was in the area, and when she got to the third level she was above the rabbit and could see it on top of the pole. She came charging down and climbed straight to the top of the pole. The bigger the cat the more difficult it is for them to climb straight up, since their weight is supported on their claws. Damai's diminutive size was an advantage here, and luckily FONZ Photo Club member Craig Salvas was there and captured it all. He was kind enough to share his pictures with us. I particularly like the one where she is posing at the bottom of the pole before she climbs up. Enjoy!