January’s bouts of winter weather have kept our tiger cubs, Bandar and Sukacita, on their toes! The cubs seem to have a heap of fun pouncing in the snow. While we want them to enjoy their time outside, we are mindful to let them out for just a short time. That way, they aren’t overexposed to the elements. Given the opportunity, they would probably play in the snow all day! Their parents—who have experienced snow many times over—tend to spend less time in the snow and more time in the comfort of the heated dens. We are training the cubs to come inside when the shift door opens. So far, they’ve been responding well, especially because they know their reward for doing so is a tasty beef chunk! Days when the temperature is in the teens and single digits, we keep the cubs inside. Mom and dad, though, have the choice of whether to go out or stay in. So, if you visit on a day that is not quite so bitterly cold, there is a good chance you’ll see them in the yard!

Bandar and Sukacita are nearly six months old. They’re still at the age where playing with each other is their favorite source of entertainment. On those colder days when the cubs are inside, we’ve also introduced them to some youngster-friendly enrichment—objects such as smaller versions of the adults’ boomer balls, balls with catnip inside, logs with different scents—and they seem to have a good time batting then around. Luckily, the cubs’ little teeth and claws are much more gentle on their toys than their parents’ are! If you’d like to purchase toys for the growing cubs, check out our Animal Enrichment Program. They’ve started basic target training and are both very enthusiastic students—so enthusiastic that we could not get a picture of Bandar that is not blurred or one of Sukacita sitting down!

Bandar and Sukacita have started basic training—shifting inside when called and teaching them to eat on their own and become less dependent on mom. We haven’t observed nursing for some time now, so we are almost certain they’re weaned off Damai’s milk. As part of their diet, they each eat about 2.2 pounds (1 kilogram) of meat per day, which is 15.4 pounds per week. They’re gaining weight steadily and, as of last week, Sukacita weighs about 51 pounds and Bandar weighs about 60 pounds. They’ve doubled in size since their November debut!

Thinking ahead, we’ll be watching the cubs’ interactions with mom and each other in order to determine the best time to separate them. Usually, tigers start showing signs that they’re ready around 1 year old. We will have more updates, photos, and videos as the weather warms! 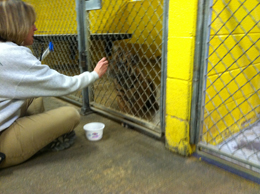 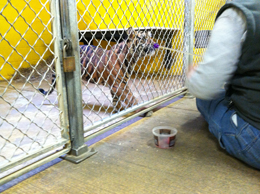