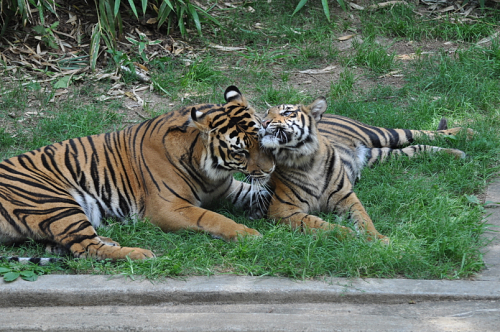 The Great Cats exhibit is celebrating two very special birthdays on August 5: Sumatran tigers Bandar and Sukacita are turning one year old! Keepers Marie Magnuson and Dell Gulglielmo have cared for the cats and their mother, Damai, since they were born. In the latest Keeper Q & A, they reveal birthday plans, presents, and their hopes for the cubs' future.

Marie: Our Nutrition Department is very creative and inventive when it comes to creating cakes for our carnivores. I expect they will come through with one of their delectable bloodsicle cakes for the cubs.

What has been your favorite memory of working with these cubs?

Marie: The way the cats interact with one another has been fun to watch. Damai was only 2 years old when she came to the National Zoo. Now, she's transformed into a superb mother raising her cubs!

It's amazing to watch her maintain the delicate balance between protecting her cubs from possible danger while encouraging them to be independent and confident. She will wrestle their enrichment keg out of the water for her cubs. But when the keg blocked the door inside and Sukacita was afraid to approach it, Damai came back outside to encourage her daughter that the keg was not something to fear.

Dell: My favorite moments are when all three cats are in the moat! One day, Bandar was on the land waiting for the floating keg to drift towards him. As soon as it was within reach, he lunged for it—only to push it out further!

A few minutes later, the keg started drifting back to the side of the moat. He patiently waited for it to get right up to the edge instead of lunging for it. As he pounced on it and got a firm grasp, I could see how proud he was of himself! Sukacita joined in, and they both pounced and played in the water. It was a great lesson in patience for them both.

What do you find surprising about the family's interaction?

Dell: For being a first-time mom, Damai has been great and has a lot of patience with her cubs. What's most surprising to me is that, even though the cubs are older, she will still offer them her "high value" treats, such as bones and frozen-thawed rabbits. Recently, she started eating only the ears off of her rabbit and leaving the rest for her cubs, even though they get their own, too!

What can zoo visitors expect to see at the tiger exhibit?

Marie: The cubs are still at an age where everything is a toy to them. With the hot D.C. weather, we've seen them take dips in the moat frequently.

Dell: Keepers give the cats various enrichment items—these could be boxes, burlap sacks stuffed with hay, or even the floating keg! Recently, we crafted a large rattle out of PVC pipes for the cats, and they love it!

Marie: Often, we'll add scent enrichment to these items to make them even more enticing. Spices and extracts are particularly popular with the tigers.

Dell & Marie: As one can imagine, the tigers are pretty tough on their toys. If readers are interested in giving the cats a birthday gift, we would love either 8-inch or 10-inch round PVC pipe that we can turn into moat/float toys or rattles! A 10-foot rattle costs about $80 to make. A donation (of any amount) to the Enrichment Giving Tree would help animal care staff purchase all the necessary pieces. Old kegs also make great floating toys for the moat!

How are training sessions coming along?

Marie: Both cubs can lie down, sit, touch the target, and jump up on the bench on cue. They will also line up parallel to the front of the enclosure for injection training. Bandar is more willing to be touched with the training poll than Sukacita is. He also allows keepers to touch his paw pads (always through mesh, of course!) Sukacita is mastering the "open mouth" cue. Her adult fangs are coming in!

Marie: Bandar now weighs in at 160 pounds! Sukacita is about 125 pounds.

Marie: Sukacita has been feisty since the day she was born, and that hasn't changed! She will go toe-to-toe with her brother (who is much larger than she) over food and enrichment items. She is always working her angles during training to try and get the maximum number of treats for the minimum numbers of behaviors!

Bandar is sweet and confident. He greets keeper with a friendly "chuff" in the morning. He's also a great student during training sessions!

How long will the cubs stay with Damai?

Craig Saffoe, Curator: We will separate Bandar from the girls once he shows an interest in breeding (likely by spring 2015). Sukacita will remain with Damai until they choose to spend much of their time apart from one another or show aggression towards each other.

How long will the cubs stay at the National Zoo?

Craig: The cubs will stay at the Zoo until they are about three years old. The Species Survival Plan has seen a good number of Sumatran tigers born lately. That's terrific for the population, especially because these species is so endangered (fewer than 500 remain in the world!) But that also means there isn't a high demand for cubs at this time because zoos have reached their cat capacity.

Once Bandar and Sukacita are ready to be paired with mates of their own, we'll bring in a new male to breed with Damai.