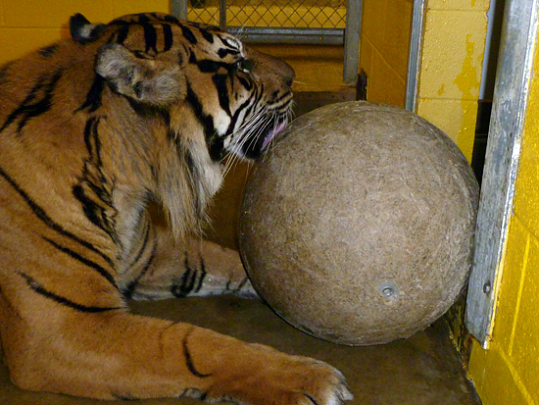 First of all, here is a Guntur update for all his many fans. He is doing very well in Zoorasia and has made his big debut. It rained for his first public appearance in Yokohama, but since his name means "thunder" this was taken as a good sign. Those of you who have been following Guntur from the beginning may remember that it also poured the day that he and his sisters Maharani and Melati met the public for the first time way back in 2006. He and Deru, the new girl in his life, are still separated but it sounds like they are hitting it off. When they have the opportunity they rub heads at the mesh and "chuff" tiger greetings to each other. Introducing big cats to each other is not for the impatient. If it is rushed the results can be disastrous, and with a species whose numbers are as low as those of Sumatran tigers taking it slow is the right thing to do.

While we are on the subject of tiger courtship, the new talent from Atlanta is here! Kavi is a 10-year-old male, and he arrived here just a few weeks ago. He was transported in the Zoo's new truck, driven by Thomas McCoy and Joseph Taylor who are very experienced equipment operators. Kavi could not have been in better hands. We were lucky that the weather in "Hotlanta" only got up to about 80 degrees Fahrenheit, but they made sure that he had air conditioning and ventilating fans so that he would be comfortable during his ride to Washington. Christina Castiglione, a keeper from the soon-to-be-opened America Trail, and I drove a second vehicle. Our job was to assess Kavi's condition during the trip and we had a list of zoos along our route that we could contact for help if we needed any.

Happily, the drive went smoothly and move was accomplished in a single day. Kavi arrived at the Zoo just after sundown. We moved his traveling crate into the Great Cats building and hooked up the runway leading back to the quarantine area. When the door was opened, Kavi hesitated only a moment before walking calmly back into the enclosures that will be his home for the next 30 days.

A 30-day quarantine is a safety precaution to guard against introducing any medical problems into our other lions and tigers. If after 30 days our vets give Kavi a clean bill of health, we can start letting him have some "yard time" and training him to come back inside when we open the door. You may remember that the first time our young female Damai went outside here she did not come in until midnight! At Zoo Atlanta Kavi was used to a routine that is fairly similar to what we do here, so perhaps he will get the hang of it quickly. If not, we will be ready to spend an evening or two here waiting for him to come inside. And when he does, no matter how long it takes, he will get a big reward such as a rabbit or an ox tail, something he doesn't get every day. Then the next time he is outside and hears the door open hopefully he will remember that inside is where the treats are. At least that is our plan. We will have to wait and see what Kavi's plans are.

Keep an eye on the Zoo's website for the date of Kavi's big debut!