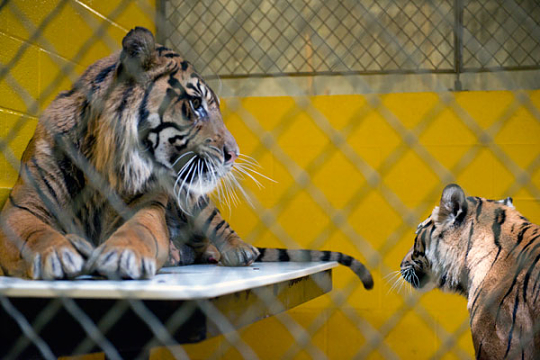 This spring has been quiet at the Great Cats unit, now that the lions have left, though Damai and Kavi continue to get along well. Since all of the lions born to Naba and Shera in 2010 have moved on to other homes, things are relatively quiet.

This gives us the opportunity to catch up on some much needed yard work here. The yard nearest Think Tank gets the least sun of our three yards. Between that and the heavy traffic of seven growing lions, well there wasn't much in the way of grass left. It has now been carpeted with new sod and looks great! We will keep cats off of it for at least two weeks so that the grass can get established.

Both Kavi and Damai are doing well. Damai has continued to regularly go into heat since the last update. We continued to do introductions during Damai's heats and Kavi has responded with enthusiasm. We are not sure why no tiger cubs have resulted, but it is way too early to be concerned that there is something wrong. Damai is four years old, and that may have something to do with it. In the wild female tigers don't have cubs until they have a territory that they are confident that they can keep and are often five years old or more. Soyono our previous breeding female was eight when she had her first cub, Berani.

We have talked with other Zoos who have successfully bred tigers and one suggestion was to keep them together as much as possible. Long-time visitors to the Zoo may remember that Soyono and her mate Rokan would spend their days outside together when we wanted to breed cubs. We would only separate them when they came inside at night to eat. Soyono and Rokan were well matched and we were confident that they could safely spend the day together without constant monitoring. We were not ready to take that chance with Damai when we first started introductions. Her inexperience could be very frustrating to Kavi and we did not want to risk him losing his temper outside where we would not be able to separate them. Now that they have had several estrus cycles to get comfortable with each other (and to practice) we are considering putting Damai and Kavi outside together as well.

But that won't happen just yet. A tiger's gestation period is about 103 days, or just under three-and-a-half months. If and when Damai has cubs, they would have to stay inside until they were at least 16 weeks old. We would want them to have all the vaccinations necessary to keep them safe. So we want to get the timing right. It would be a shame to have cubs who are ready to go outside for the first time in January when it is cold. Right now we are planning on reintroducing Kavi and Damai in August. That way if she gets pregnant right away, the cubs would be ready to meet their adoring public in March when things in Washington start to warm up. If it still takes a few more tries, we will have months of nice warm weather to count on for any possible cubs.

So keep your fingers crossed and please be patient. August isn't so far away!