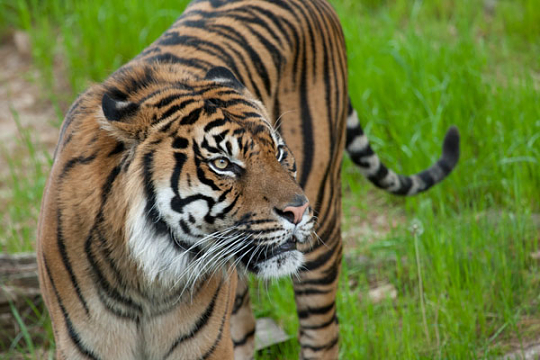 It's official! Guntur will be leaving soon and going to Zoorasia in Yokohama, Japan. There is a young female there who was recommended as a breeding partner for Guntur. She is not related to any tigers in the USA, and Guntur is not related to any tigers in Japan, so this is really an excellent match. While we will all miss Guntur, we are thrilled that he is going to have the opportunity to father cubs! And Zoorasia is a wonderful facility so we know that he will be well cared for in his new home.

The process of deciding where and when one of our animals will be sent can be long and complicated. When the move involves critically endangered animals and international travel no decisions are "minor." So there was quite a bit of time in between "It's looking like Yokohama" and "It is Yokohama!" But fortunately senior management worked out the details. Keepers are the ones who prepare the animals for the trip, doing all we can to make the move as easy on the animal as possible.

In a sense Guntur has been preparing for this trip all of his life. He spent the first couple of months inside with his mother and sisters. The cubbing dens were his whole world. His first day outside involved an unexpected swim, his first glimpse of the sun and sky, and the first time his paws touched dirt and grass. That's quite a change! But his mom and sisters were there for moral support and soon going outside was fun, not scary. Throughout his life he has had new experiences such as going into a new yard, moving to a different indoor enclosure or finding a strange enrichment item in his yard. Every new challenge that he successfully met has made him a more confident cat. So while moving to Japan will be the biggest change he has ever faced, we feel sure that Guntur can handle it.

If you have a cat and have had an exciting time trying to get him or her into a carrier for a trip to the vet's, you are probably wondering how we go about getting a tiger into a box. The answer is: "Slowly, and very carefully." We can't get behind him and push. Guntur will be traveling in a brand-new aluminum crate crate (that weighs 378 pounds when it's empty). It has plenty of ventilation holes on the sides as well as drainage holes on the bottom with a tray to catch any urine—he will be in there for about 24 hours—and a built in water bowl that can be filled from outside. We will feed him early on the day before he leaves, but he won't eat again until he arrives at his new home. Not only do we want to avoid his needing to defecate in the crate, but we don't know whether or not he will be affected by motion. We would hate for him to get airsick! There will be hay inside so he will be comfortable and plenty of room for him to lie down and sleep.

We will not give him anything to help him sleep however. There will be some bumpy moments when the crate is transferred onto the truck that will take him to the airport, and when he is loaded onto the plane itself. We want Guntur to be steady on his paws for that! Experience has shown us that once a cat is loaded into his crate he realizes that he is along for the ride and will just sit quietly and wait to see what comes next. There is no need for any sedative.

The travel crate is attached to one end of the runway that Guntur walks through when he goes from his enclosure outside to the yard. During the day when he is not outside, he has access to it and is rewarded for going inside with chunks of beef. Tigers are as curious as other cats, so Guntur checked out the crate as soon as he had the opportunity. Leigh got some pictures of him, and you can see how relaxed and comfortable he is inside. When it is time for him to go he will be traveling in something with which he is familiar and he will feel secure in there.

Guntur will also be traveling with someone who is familiar. Leigh will be going along as well, and they will be traveling on the same passenger plane, though Guntur will be in a special pressurized and climate-controlled cargo section. Leigh will be in Japan for about a week, helping Guntur adjust. It will help Guntur to transition to his new home if there is a familiar face when he arrives. Leigh will be able to show his new keepers what Guntur has been trained to do and show them what the hand signals are for the various behaviors. We want Zoorasia to know what a smart tiger they are getting!

So our boy is all grown up and moving away. We won't have too much time to miss him however. The new breeding male from Zoo Atlanta will be here soon!