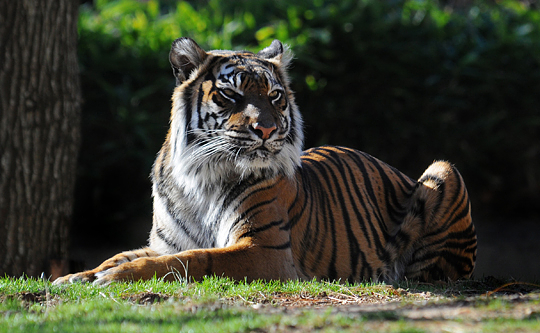 Longtime followers of the tigers here at National Zoo are familiar with Soyono. She is our older female Sumatran tiger, and for years she and her mate Rokan formed our breeding pair.

Soyono was born here in Washington in June of 1993 and has spent all of her long life here, becoming the oldest Sumatran tiger here in the United States. Sadly, that long life will soon be drawing to a close.

As with almost all big cats, as she has grown older Soy has developed a disease called spondylosis. This is basically vertebral arthritis, and as it develops the bony growth on the vertebrae can press on the nerves as they leave the vertebral canal, causing discomfort or pain, and often a loss of nerve function. Spondylosis was the reason we had to euthanize Rokan two years ago and soon, sadly, we will have to euthanize Soyono as well.

While all tigers are beautiful, our (very biased) opinion is that Soyono is exceptionally lovely. But she is not just a pretty face. When we would work with her to train various behaviors, she was always quick to understand what we wanted. Sometimes she would work with us to determine exactly what it was that we wanted so she could refuse to do it again. There is a reason that an adult female cat is called a queen. And she has always been regal.

She has a sense of humor as well. She is legendary among the craftsmen who work at the Zoo for hiding under her sleeping bench while they repaired some piece of equipment. She would be so quiet that they would forget that she was there. Then, when they had packed up their tools and started to walk out she would launch her almost 200 pounds against the chain link at the front of her enclosure with a deafening roar. Nothing made her happier or prouder than when they jumped about three feet straight up! I swear you could almost hear her chuckle.

Soyono is not a tame tiger. She has caught several wild ducks that have foolishly strayed into her yard. Being the discriminating gourmet that she is, she has only eaten the breast meat and left the rest of the carcass for keepers to clean up.

As a Sumatran tiger, Soyono is one of the rarest animals in the world. She has done her part in preserving her species by producing three litters of cubs. Her seven cubs have gone to zoos all over the country and of course one son, Guntur, went all the way to Japan. We are hoping to hear soon that he has successfully bred. Her daughter Maharani has produced two litters of cubs at Cameron Park Zoo in Texas.

But for me her most endearing moments came when her mate Rokan was near the end. There was only one enclosure that he could have access to because of his physical limitations. Most of the enclosures have an opening to an adjoining enclosure with a mesh door in between so that two animals can have visual access to each other. Rokan's enclosure did not. So Soyono stayed in a drafty, cramped, cement floored runway so she could be near him when her presence comforted him. She had access to a much more comfortable area. She chose to be with him when it mattered.

She will be missed.