Japanese Giant Salamanders At The Zoo

One of Japan's "special natural treasures" is now among the National Zoo's most valued scientific gems, after a voyage that has united two cultures in an international conservation effort.

The City of Hiroshima Asa Zoological Park gave the Zoo Japanese giant salamanders. These salamanders will be the foundation of a new long-term breeding program in the United States and may play an important role in saving amphibians around the globe.

"Our Japanese colleagues at the Asa Zoo have successfully applied decades of work and science to Japanese giant salamanders in the field and at their zoo," said Dennis Kelly, director of the Smithsonian's National Zoological Park. "It is an honor for the National Zoo to be entrusted with the offspring from their efforts, and we look forward to collaborating with them to save this magnificent species."

At the celebratory opening of the new breeding center on July 22, 2010, Japanese Ambassador Ichiro Fujisaki solicited the help of students from Virginia's Great Falls Elementary School to name one male salamander. The students voted on two of the ambassador's proposals, Hiro and Asa, and Hiro was the students' choice. Hiro represents the city of the salamanders' origin, Hiroshima.

Japanese giant salamanders live in cold, fast-flowing streams in Japan. Agricultural development and habitat modification have greatly reduced their numbers. Dams and culverts prevent them from migrating to nesting sites to mate. Japan is mitigating this problem by building fish ladders that allow the salamanders to get around the barriers. Japanese giant salamanders belong to the Cryptobranchidae family of amphibians that includes the Chinese giant salamander and hellbenders, a native species found in Appalachian mountain streams.

The National Zoo had Japanese giant salamanders between 1940 and 1970, and had one on exhibit on Asia Trail as recently as 2008. But with this gift, the Zoo hopes to become the first in the United States to successfully breed this species, which has not been bred outside of Japan in at least 100 years.

Four of the salamanders will live in the breeding center at the Zoo's Reptile Discovery Center, which mimics the living conditions of the salamanders at the Asa Zoo. One salamander, a 19-year-old female weighing eight pounds and measuring two-and-a-half feet long, will be on exhibit on Asia Trail.

Amphibians worldwide face extensive threats, including habitat destruction, pollution and climate change. Nearly one-third of the world's more than 6,000 amphibian species are in danger of extinction, resulting in the worst extinction event since the time of the dinosaurs. One of the primary killers of amphibians is a fungus that causes a deadly skin disease called chytridiomycosis, or "chytrid." Zoo scientists will use the gift of the Japanese giant salamanders to learn more about chytrid, which does not appear to be lethal to this species.

In addition, Zoo researchers will learn more about how to best care for the animals, what normal behavior looks like and what it takes to breed them. Once Zoo veterinarians determine what is normal for Japanese giant salamanders in terms of white- and red-blood-cell counts, liver enzymes, kidney enzymes, and other factors, they will have a baseline to study salamander disease and other medical issues. 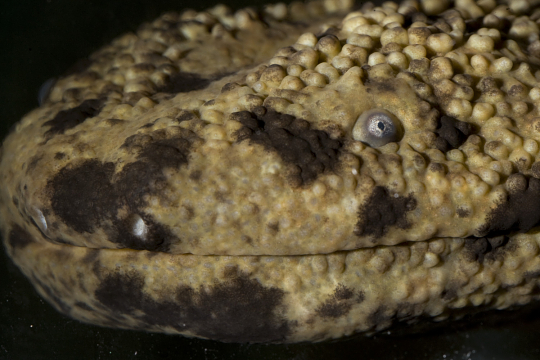