Coral Larvae “Snowstorm” in the Tropics

By Mike Henley, Invertebrate Exhibit Keeper at the National Zoo

For the past three years, I have been traveling to the west coast of Puerto Rico—just outside of Rincon—accompanied by aquarists and marine scientists from the Smithsonian, University of Houston, Shedd Aquarium, Omaha’s Henry Doorly Zoo, Rotterdam Zoo, Florida Aquarium, and many others. We arrive in August, our specific days of arrival dictated by the lunar cycle, which differs from year to year. We arrive on the day of the August full moon. Why? Our focal research animal—a colonial, sessile invertebrate called elkhorn coral (Acropora palmata)—is gearing up for its annual underwater spectacle.

Elkhorn coral, or as we refer to it—palmata—is endemic to the Caribbean and western Atlantic, is one of the main reef-building (or stony) corals of its habitat and is the largest growing member of its family of corals—one of the largest in the world—despite the actual animal (the coral polyp) only being a few millimeters in size. As colonial organisms, there can be millions of polyps on a given colony, a colony that can grow as large as an SUV.

We arrive on the August full moon, also the warmest time of the year in the Caribbean, because once a year—anywhere from two to nine days after the full moon—these corals “do their thing.” And they do it gloriously! We are here for the annual mass spawning of these, now threatened, reef-building corals. It is nothing short of amazing to me that these brainless animals have fine-tuned their reproduction to the same hour of the same few days every year.

We dive at night, donned in our dive gear, towing flashlights and nets, to capture the egg/sperm bundles (elkhorn is a hermaphrodite) these corals have spent a year’s energy budget producing.

At 9 p.m., you can see the individual polyps “setting,” holding a bundle, and by about 9:15, individual polyps have started to release their gametes, which are positively buoyant, into the water column. Fifteen or 20 minutes into the mass spawn looks as if one is in the middle of a snow storm, only the “snow” is floating up! On a given night when even half of the approximately 1,100 elkhorn colonies in the reserve are spawning, there can literally be billions of egg/sperm bundles in the water. If our team of 20 divers only captures even one million bundles, it is a fraction of a fraction of what is actually in the water. 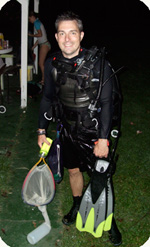 After the fun is over, the real work begins. We spend the next week, rotating around the clock in two-hour shifts, caring for and rearing the coral larvae. How on Earth do you care for what resembles a delicate, aquatic floating speck of sand? More than simply “very carefully.”

Our team has spent the past few years designing and redesigning round, plastic tanks—usually makeshift tubs that have been modified by any number of Macgyvers in our group. We draw in seawater from the beach, filter it, and then tee off the pump’s output to several of these (about 15 of them) round tanks so that each individual tub, which can hold several thousand coral larvae in each, has its own set of water control that can be individually adjusted. After about five or six days of constant stirring and motion, the larvae are ready to be packed up and shipped to our respective institutions for settlement and post-larval care. 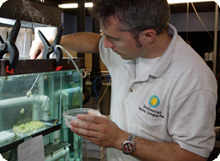 In addition, the Zoo's Mary Hagedorn has been cryopreserving the sperm of this species for the last three years, in hopes of banking down the genes of these corals for future use if needed. Her work “day” begins as we shuttle in bottles of egg and sperm at around 10 p.m. She and her team have been the first to ever successfully freeze this coral’s sperm, thaw it, and successfully fertilize an egg and receive viable larvae—living proof that these human reproductive techniques have their place among marine conservation for the humble coral.

Why are we doing this? Stony corals are quite literally ecosystem builders, and elkhorn coral is one of the keystone reef-building corals in the Caribbean. Over the past 30 years, we have seen a steady decline in their population, dying off more than 90 percent throughout their range. These sensitive animals are being hit by a combination of stressors—overfishing, pollution and runoff, and warming oceans, just to name a few.

The Caribbean has seen a recent shift from primarily coral-dominated reefs to algae-covered reefs, and the larvae produced from sexual reproduction are not finding much suitable habitat in which to settle. Furthermore, we do not have an established captive population of elkhorn coral in captivity. Should the unthinkable happen and elkhorn were to go extinct in the wild, zoos and aquariums can be repositories for their wild counterparts, just as they are for various mammal, bird, reptile, and amphibian species that are already established. And, our backup to that population will be Hagedorn’s “frozen zoo.”

This story was originally published in March 2010 issue of Between the Lions, Friends of the National Zoo’s volunteer newsletter.