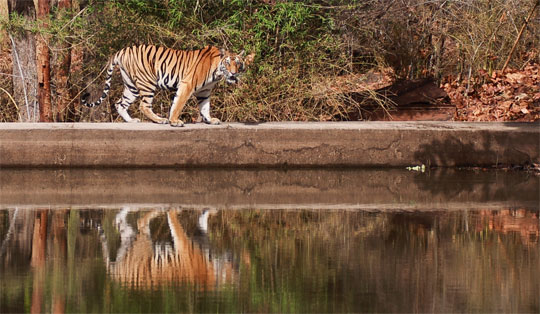 In 2008 the Smithsonian, along with the World Bank, the World Wildlife Foundation, the Global Environmental Facility founded the Global Tiger Initiative. The Global Tiger Initiative is a platform that helps all 13 current tiger range countries develop their own national tiger recovery program. In 2010, all 13 tiger range countries (countries where tigers live in the wild) convened in St. Petersburg, Russia, to sign a Tiger Declaration, committing their countries to implementing their national tiger recovery programs for saving and/or restoring wild tigers. The goal is to double the global tiger population (3,200 animals today) by 2022.

I traveled with Mahendra Shrestha, our tiger conservation partnership program director, who leads the Smithsonian's capacity building programs for tigers. All of Bangladesh's tigers live in the Sundarbans, the largest mangrove forest habitat on earth, and six percent of all such habitat, and that only such ecosystem that harbors tigers. There are somewhere between 200 and 400 tigers there. The uncertainty in that population count reflects the lack of capacity they have in scientific monitoring and censusing methodologies. 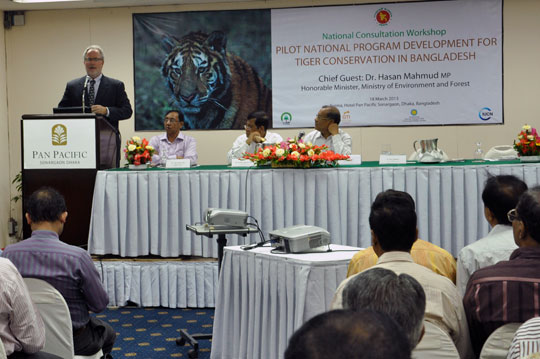 Not having an accurate baseline population number is not a trivial problem. Such an estimate is important for measuring the success or failure of conservation interventions. Problems mostly relate to poaching of prey species and too many people extracting forest resources (such as thatch and honey). These activities put people in conflict with tigers. More people than tigers are killed each year, but recent relative abundance surveys (from foot prints, sign etc.) suggest that the numbers are declining. Conservation managers suspect an uptick in tiger poaching to feed to wildlife trade.

The Smithsonian's role within the Global Tiger Initiative is to help develop the capacity of two target audiences: front-line tiger staff and mid- to high-level managers and decision-makers. This trip to Bangladesh was designed to help the Forest Department flesh out a "Pilot National Program," which will serve as a blueprint for specific actions they intend to implement within the next three to five years: what will be done, who will be responsible, when will it be done, how much will it cost, and where will the funds come from.

At our suggestion, they will be forming a National Tiger Coordinating Committee composed of government and non-government stakeholders to facilitate implementation of the pilot program, and to oversee progress quarterly. We have funded the entire workshop with our grant from the World Bank, as well as the piloting of a newly developed training course we've designed focused on effective patrolling and scientific monitoring by front line staff.

We had more than 100 stakeholders engaged over two days in marathon planning sessions, in four break-out groups of about 20 people per group. The meetings were conducted in a combination of English and Bengali. The meetings went very smoothly overall, with sustained enthusiasm and strong participation. 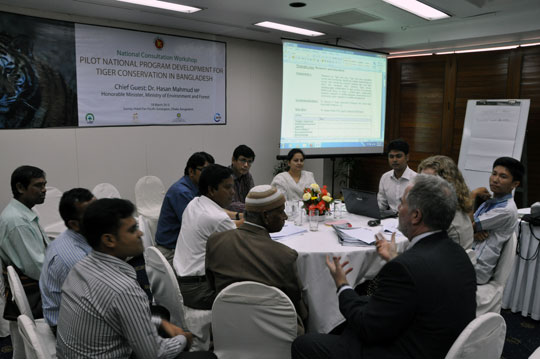 I worked as part of a small three-person drafting team that spent two post-workshop days creating a meeting report with summary recommendations. The government of Bangladesh recently received a large grant from the World Bank (International Development Assistance grant) to support tiger conservation, and we are assisting the Forest Department in making the most of these precious funds. We are hopeful that the "Pilot National Program" will provide the momentum needed to make real progress in establishing a National Training Institute, which is something that doesn't now exist, but would be a huge game-changer for Bangladesh for wildlife and habitat preservation, and tiger conservation, in particular.

We also hope to play a role in adding genetic tools for censusing tigers noninvasively via scats, which was pioneered by our geneticist Jesus Maldonado, and validated on tigers in India by two of our recent doctoral students, Trishna Dutta and Sandeep Sharma, who were mentored by John Seidensticker and Maldonado.

We will be doing a similar exercise in Malaysia, and from what I'm witnessing here, I expect this to be very useful for the Malaysia context, as well.

While serious obstacles remain, I am optimistic that we can advance tiger conservation in Bangladesh, and as I told the group in my opening remarks at the conference:

"The future of the wild tigers of the Sundarbans rests in your hands—as champions for their survival—and the Smithsonian is ready to stand with you to help build the institutional and professional capacity needed to ensure your success."

The hope that they will be successful and that we have the chance to be a part of that gives us all with the energy to keep fighting the good fight to save species and the habitats they require for survival.

That's all for now. Think good thoughts for the tigers of the Sundarbans!