Tweets from the Tropics

Catch up on happenings on our research project on a Nicaraguan Bird Friendly® coffee farm by perusing the tweets below. A full blog post is coming soon.

Im planning to write a blog entry soon about the farm...maybe tonight? But first, more #birdsbugsandtrees

I made it! Snug in a cabin with one of my fave insects to greet me, a myrmeleonid, the antlions pic.twitter.com/cInX7dIRXF

Watching the sunset from the cabin. Not a bad place to spend January! #birdfriendlycoffee pic.twitter.com/LQyaopdGS7

So...last night was exciting. Experienced my first earthquake and it was 5.7 mag! Thankfully, no damages reported. #Nicaragua

Here's a little sample of my view in #Nicaragua. It's crazy windy here, & I'm doing bird observations in this! https://t.co/P3F1Su3psD

Need to remember to flip cups over. This little friend was stuck in my coffee mug this morning #Nicaragua #wildlife pic.twitter.com/DozMCsg2EW

I'm most excited that at least 39 of those species are N.American migrant birds who spend 5-7 months here #birds #birdfriendlycoffee

I can't stress enough how imp. #birdfriendlycoffee is. If you saw the difference w/ sun farms,you wouldn't think twice @ the store! #birding

& here is my fav tree on the farm. An old, majestic Guanacaste. Most of these are big, but this one is just pretty. pic.twitter.com/Pn4OrXFTSw

the farmer is interested in the #biodiversity on his farm so I'm keeping a list for future visitors-so many cool things! #birdfriendlycoffee

Today I saw my first #bee swarm! It was amazing! In other updates: exhausted. That is all. pic.twitter.com/auMVq2NjXJ

In an ongoing study in Nicaragua, researchers are looking into the role birds play in controlling insect pests on coffee farms. It is a win-win, the coffee farmer gets a free pest extermination service and the birds get food and shelter.

One study site, where the pictures to the right were taken, is a small cooperative close to San Ramon in a community called La Pita. Many different kinds of warblers migrate from North America to coffee farms in Central America to overwinter. 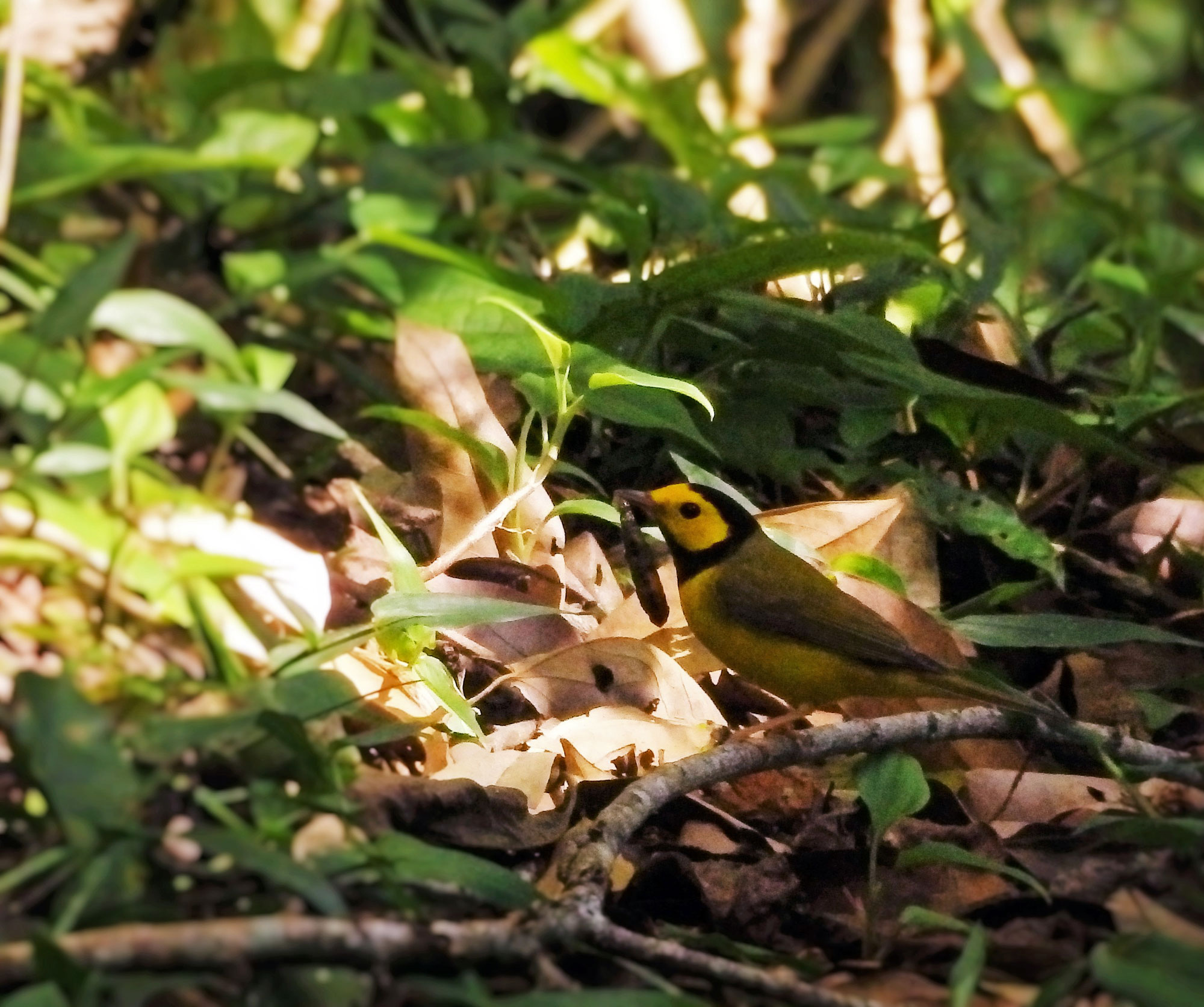 This photo shows a black-and-white warbler catching a moth. These warblers are somewhat similar to woodpeckers or nuthatches in that they clamber around tree trunks and large branches looking for tasty morsels. 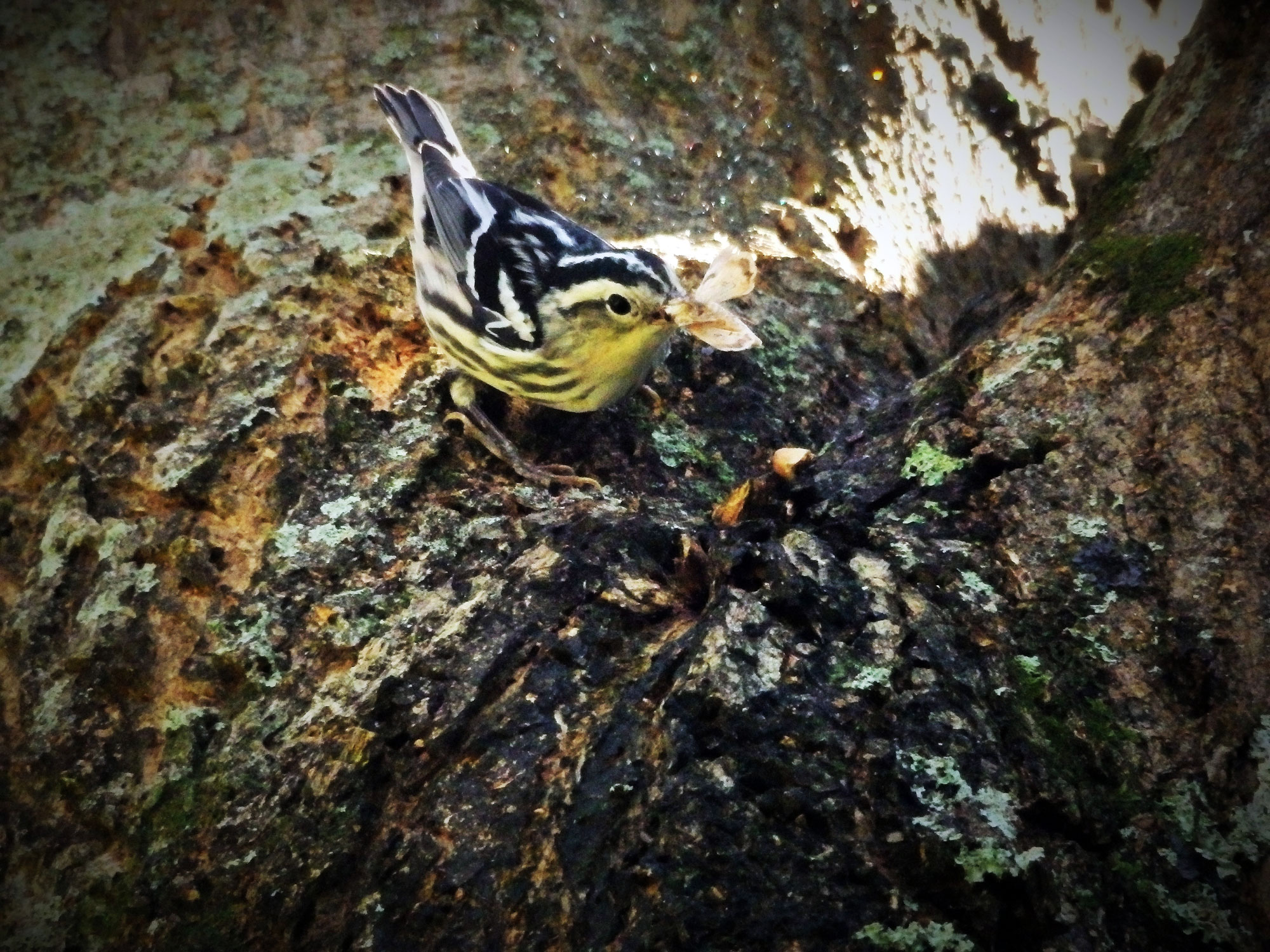 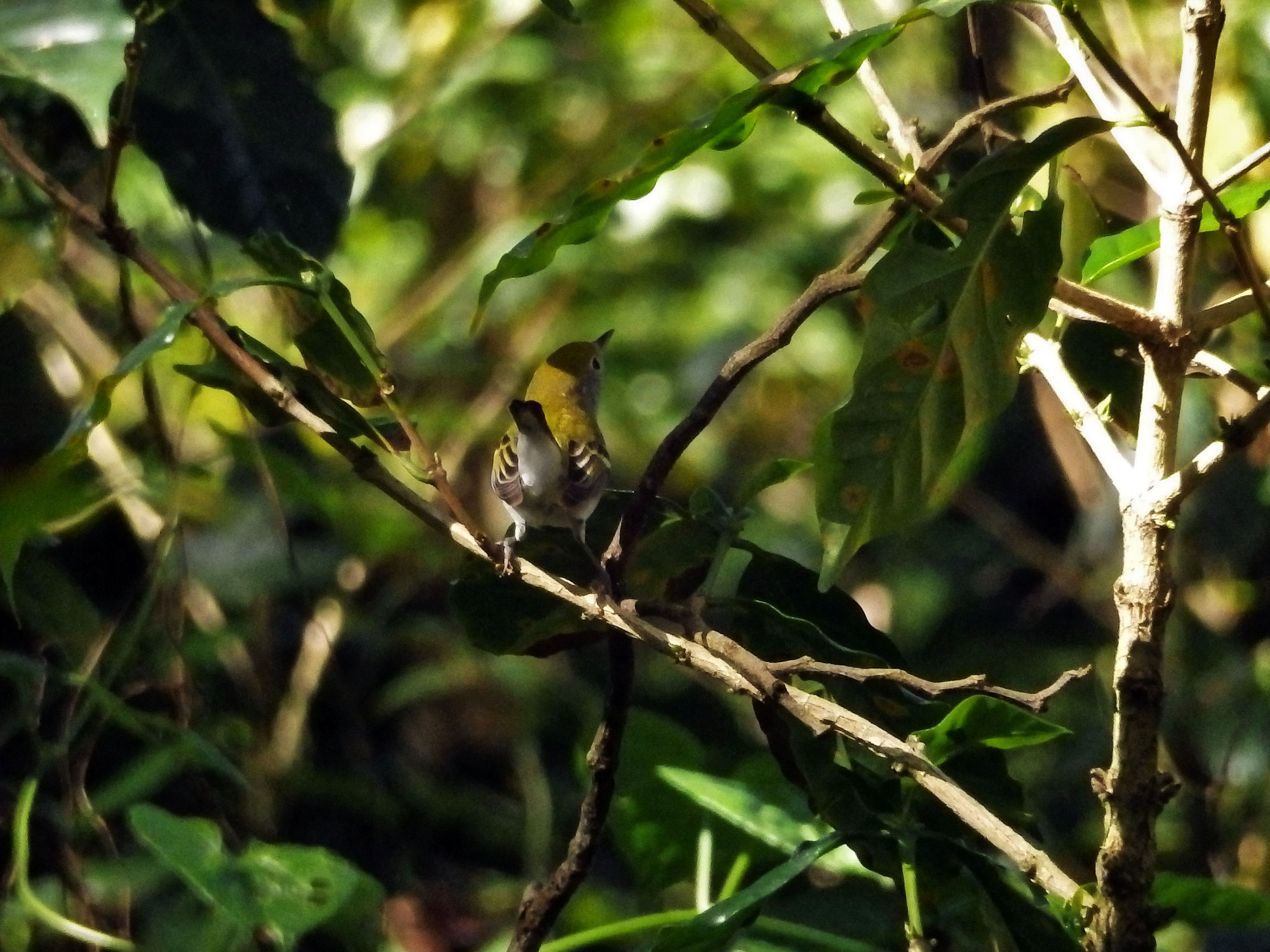 You may already know about shade-grown, bird-friendly coffee, but do you know about the requirements for certification? One requirement is to have a high diversity and abundance of native tree canopies. Trees provide birds with shelter from weather and predators but the most important resource they provide is food! Food is the reason many of our migratory birds leave the states in the first place—there's much more food, specifically insects, in the tropical 'winter' than in snowy, cold North America. 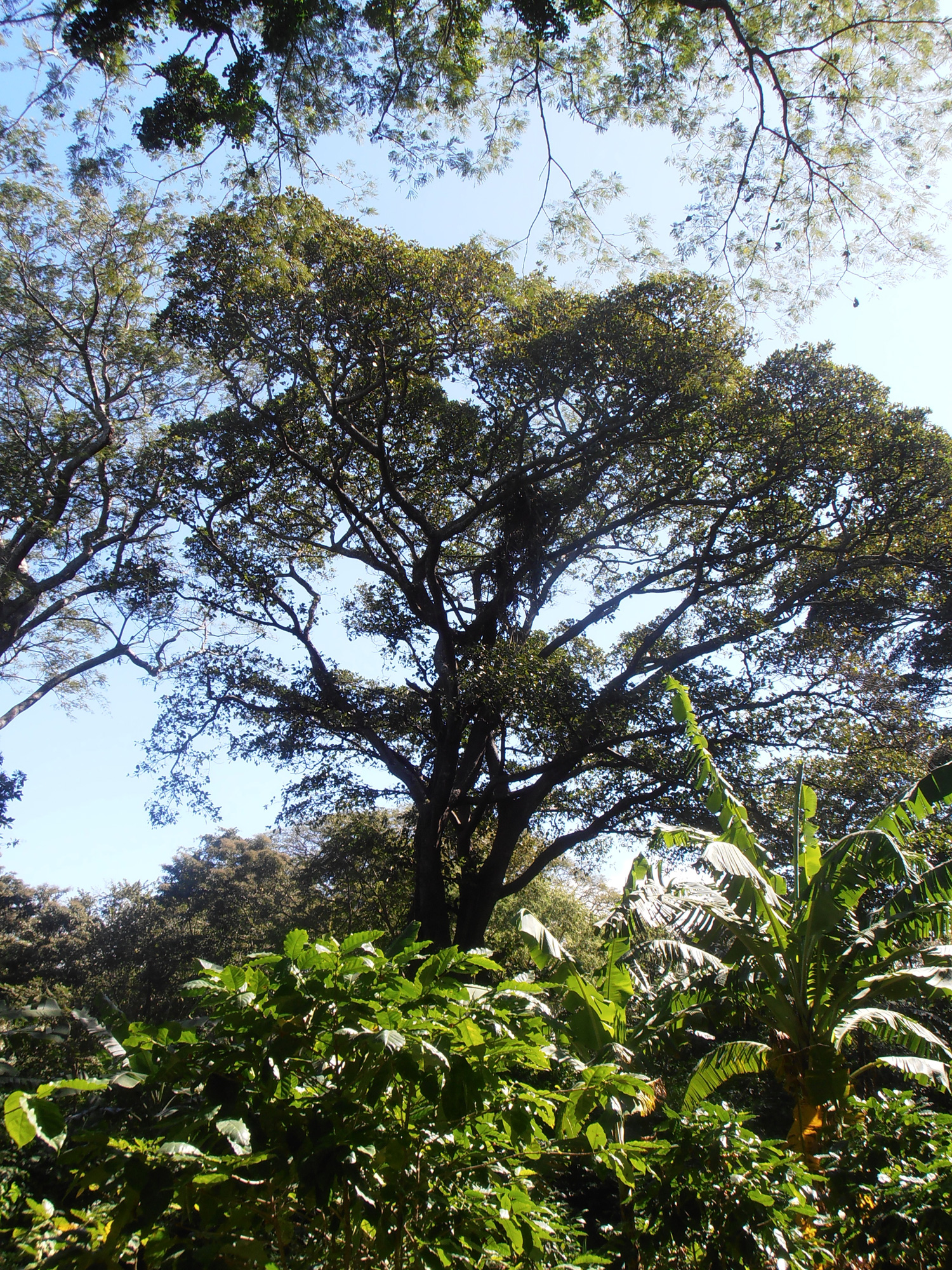 A large fig tree in the canopy over a shade grown coffee farm in Nicaragua.

There are lots of different herbivorous insects out there, but more than 90% of them are highly specialized to feed on only one kind of tree's chemical compounds. In addition, some species of trees are very productive insect producers, while others may not have any insects at all. For example, there are far fewer insects feeding on the tulip trees (Liriodendron tulipifera) than on the oaks (Quercus spp.) in your neighborhood. The same is true for trees on coffee farms. Because many migratory birds are highly insectivorous, some canopy trees may better support migratory bird populations than others. So far, however, no one has looked at bird-insect differences between individual species of trees on coffee farms, which is why I set out to visit some bird-friendly coffee farms this January.

During our recent trip to Nicaragua, Kerry Snyder (an undergraduate from University of Delaware), Dr. Robert Rice (from the Smithsonian Migragory Bird Center), and myself collected some preliminary data on which trees birds were foraging on, what foods they were feeding on, and what kinds of insects were available on trees. We were also looking at the variation of canopy trees on different farms to find suitable areas to collect data next year.

Seven different farms were visited in the districts of Carazo, Matagalpa and Madriz. We hiked through steep coffee farms looking for migrant birds and recording what trees they foraged in to compare to what trees were available to use. Many different warblers were found, including: black-throated green, black-and-white, Wilson's, chestnut-sided and even the threatened golden-winged warbler in bird-friendly coffee farms.

Some species like the Tennessee warbler occasionally foraged in fruit or nectar, but most were gleaning insects from leaves and twigs. One farm had a flock of over 50 different individual warblers foraging on only a few species of trees. Many of these birds were even found foraging directly on coffee plants, supporting that attracting birds to your farm can help pest control on coffee as well.

We spoke with several local farmers to learn more about which canopy trees were retained from the forest, and which were planted for shade or alternative crops. Kerry is staying for three more weeks and will be conducting more bird foraging observations as well as interviewing farmers to see why they chose to plant particular canopy trees over others. Hopefully, this new project will help strengthen recommendations for coffee canopy trees that benefit both the birds and the farmers, too.