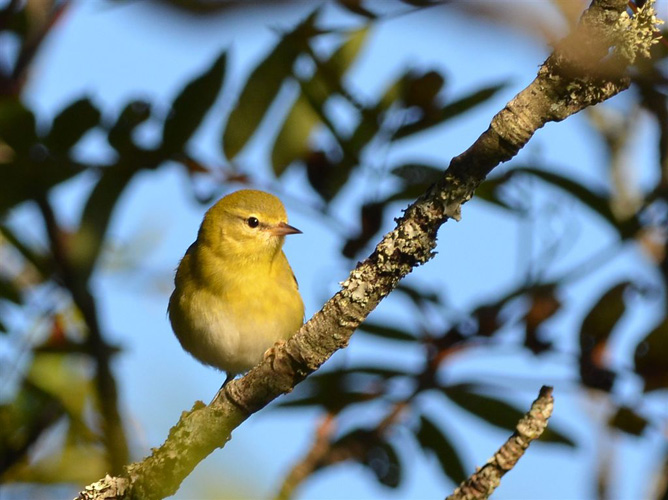 Despite its misleading name, the Tennessee warbler neither breeds nor over-winters in the state of Tennessee. This species got its name when the first specimen collected had the misfortune of being shot by Alexander Wilson in 1832. This unlucky individual happened to be passing through Tennessee near the Cumberland River in the middle of its long migration between the Canadian boreal forest and the tropical forests of Mexico and Central America. A more apt name for this species might be the "Coffee Warbler" since it often over-winters in coffee plantations in Latin America. Whatever its name, it distinguishes itself through its behavioral versatility and unique specializations.

Even after Wilson described the Tennessee warbler, its breeding habits remained a mystery until 1901, when the first nests were discovered in Canada. We now know their breeding range stretches across the boreal forests of Canada from British Colombia to Quebec and New Brunswick. When nesting, this warbler ventures into the United States only in the forests of the upper Midwest (Minnesota and Michigan) and the northernmost parts of the Northeast (Maine, New Hampshire, Vermont, and the Adirondacks of New York). Throughout its breeding range, this warbler is associated with boreal forests, usually coniferous but often mixed, ranging in age from early successional to mature.

Populations of this species can fluctuate dramatically from year to year, reaching their highest densities -(up to 610 pairs per square kilometer)- in forests with outbreaks of the spruce budworm. Local population increases seem to be the result of abundant food as new birds are attracted to the area. Even with the additional birds, budworm outbreaks allow breeding warblers to increase their clutch size (the number of eggs per nesting attempt). Clutch size for Tennessee warblers varies from three to eight eggs. The incubation period ranges from seven to 12 days and time to fledging after hatching is 11 to 12 days. This ground-nesting species commonly conceals its nests in mossy hummocks at the base of small shrubs and trees, or in upturned stumps. It rarely attempts a second nest in a season, but will double brood after losing a nest to predators.

Like most long-distance migratory songbirds, the Tennessee warbler spends a relatively short proportion of the year in the North. After arriving on the breeding grounds in late May to mid-June, it usually completes breeding and is migrating by late August.

For post-breeding birds, the arrival of cold weather can be unpredictable; this prompts early migration. Some adult Tennessee warblers appear south of the breeding grounds as early as mid-July. This long-distance traveler is restless enough to regularly leave the breeding grounds before completing molt, showing an exceptional tendency to molt and migrate simultaneously. This is unusual, especially for warblers, as most birds replace worn feathers in the late summer before departing on migration. Growing new feathers for molt requires substantial food energy, as does migration, so most bird species separate these activities temporally. Generally, fall migration for Tennessee warblers is protracted with the peak of migration in August. Adults usually leave first, followed by first-year birds, which sometimes depart as late as October.

Tennessee warblers join mixed-species flocks during migration, primarily foraging in woody habitats. The general migration route is back and forth across the central and eastern United States from the Mississippi Valley to the Atlantic coast. They fly across the Gulf of Mexico between the Yucatan peninsula and the southern United States coastline from Florida to Texas. On the southward journey, Tennessee warblers move more regularly to the western side of this track than during the northward trek, when birds are more common east of the Appalachians. Throughout the migration route, abundances can be highly variable from year to year.

The spring migration is more concentrated in time than the fall migration, with birds found more frequently in single-species flocks. In Panama, migration starts by late March with birds moving through Costa Rica and Mexico in April and early May. Tennessee Warblers generally cross the Gulf of Mexico in early May, making landfall between Alabama and Texas. Birds return to their breeding grounds in Canada on or about the third week of May with stragglers still arriving in early June.

After crossing the Gulf of Mexico, Tennessee Warblers spread out across southern Mexico and Central America with some birds reaching as far south as northern South America, especially Colombia. During the winter months, this species is found in a wide range of tropical forest habitats, but is particularly well-known for a strong affinity to coffee-growing areas. According to pioneer Neotropical ornithologist Alexander Skutch, 'Coffee Warbler' might be a more appropriate name than Tennessee warbler. 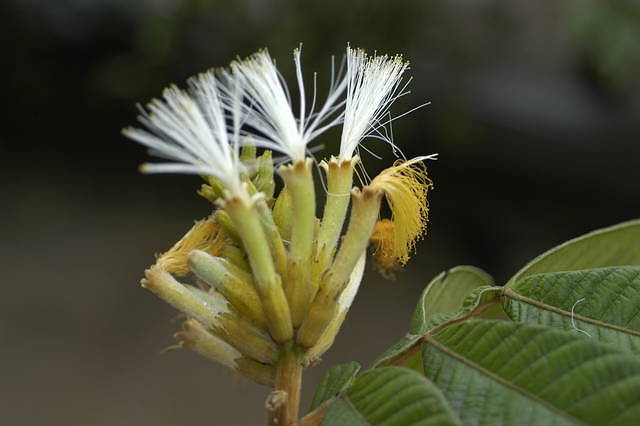 This species forms large mixed-species flocks and is very abundant in coffee plantations grown with an overstory of shade trees, especially those from the abundant tree genus Inga. When the Inga is in bloom, Tennessee warblers can be the most abundant bird found in coffee habitats. The nectar from Inga flowers provides an important food resource during the winter dry season throughout Latin America.

Tennessee warblers have exhibited a wide range of social behaviors on their non-breeding grounds, from defending individual flowering trees to highly gregarious mixed-species flocks with lots of conspecifics. This behavioral flexibility is not well understood but may be linked to the dependability of food resources. For example, flowering in individual Inga trees is fairly short-lived, consequently each Inga species has a distinctive flowering pattern across the landscape. Gregarious foraging behavior may help Tennessee Warblers track and exploit these flowering events.

As mentioned previously, the Tennessee warbler is a spruce budworm specialist on its breeding grounds. During the breeding season, this bird relies almost exclusively on arthropods (insects and spiders), especially (butterfly and moth larvae (including the spruce budworm), which can account for as much as 69 percent of the adult diet and more than 90 percent of food brought to nestlings. This is in marked contrast to food habits during migration and the non-breeding season.

During migration, Tennessee warblers make extensive use of energy-rich fruit resources as well as insects. This small warbler is limited in the size of fruit it can fit into its tiny bill. Consequently, they are more abundant in second-growth and open forests, which generally have trees and vines with small bird-dispersed fruit. Using a wide range of food resources on its non-breeding grounds, this warbler was described as the species with the most flexible diet in Monteverde, Costa Rica.

As with most warblers, arthropods continue to be a substantial component of the winter diet, but Tennessee Warblers also readily switch to fruit and flower nectar. It is thought that this dietary shift is triggered by low availability of arthropods during the dry season that extends throughout most of its wintering range. This may allow the Tennessee Warbler to use a wider range of woody habitats during the non-breeding season, including many human-managed ecosystems. In widespread coffee-growing areas, Inga flowers provide a critical resource, however flowers from other shade trees can also be important (including Erythrina and Grevillea).

Although not normally incorporated in large-scale coffee farming, native shade trees could provide additional food resources for migratory birds. The Tennessee Warbler has been observed eating nectar from a diversity of tree and vine species in undisturbed or second-growth tropical forests. In fact, for some nectar sources, such as the vine Combretum fructicosum, Tennessee Warblers shift from their gregarious flocking behavior to defending small feeding territories. The mechanisms behind such behavioral shifts and diet choices are still not well understood, but this warbler may be a good study species for uncovering the secrets of behavioral flexibility in migratory songbirds.

Tennessee warbler populations seem to be healthy throughout their range. Their range does not significantly overlap the Brown-headed Cowbird's, so nest parasitism is rare. Possible threats to this species include use of pesticides, especially spraying to control spruce budworm outbreaks, collisions with human structures during migration, and habitat degradation, in particular, intensification of coffee management practices on the non-breeding grounds. Encouraging greater use of a diversity of native shade trees on coffee farms may be of particular benefit for this species.