La Sierra Nevada de Santa Marta of Colombia has two seasons: dry and wet. Even in the dry season, though, rainfall and cloud cover can be common, just like there are sunny days during the wet season. Some coffee farms simply cannot plant a lot of shade over their crops, because the constant daily cloud cover in combination with the shade trees would not allow them to produce enough coffee to sustain their livelihoods. Large clouds rolled in by the afternoon at all of our field sites, and although our March field expedition was timed right around the end of the dry season, there were a few afternoons lost due to persistent rain.

This meant that several resident bird species were already gearing up for the reproductive season. Doing our daily trail mapping and census work, we found several species of birds already feeding fledglings, which meant they had completed a successful incubation and nesting period and had successfully fledged some young. The local birds use a variety of microhabitats for nest placement.

We saw black-chested jays (Cyanocorax affinis) feeding almost independent young, and also found another pair nesting high in a tree along the creek. Their large twig nest was at least 15 meters off the ground, but these large, loud and conspicuous birds made it easy to locate their nest. The locals affectionately refer to these birds as “chow-chow” due to their distinctive calls. You can listen to a recording one of their calls here.

We also discovered a cavity in a tree snag occupied by a tropical screech owl (Megascops choliba). The cavity was about 10 meters high, right in the middle of a mature coffee lot in one of the shade trees that provide canopy cover over the coffee. The owl quickly withdrew its head from the opening of the tree cavity. At La Esperanza, one of the large, certified bird-friendly coffee farms, we flushed an incubating common pauraque (Nyctidromus albicollis) off her eggs. 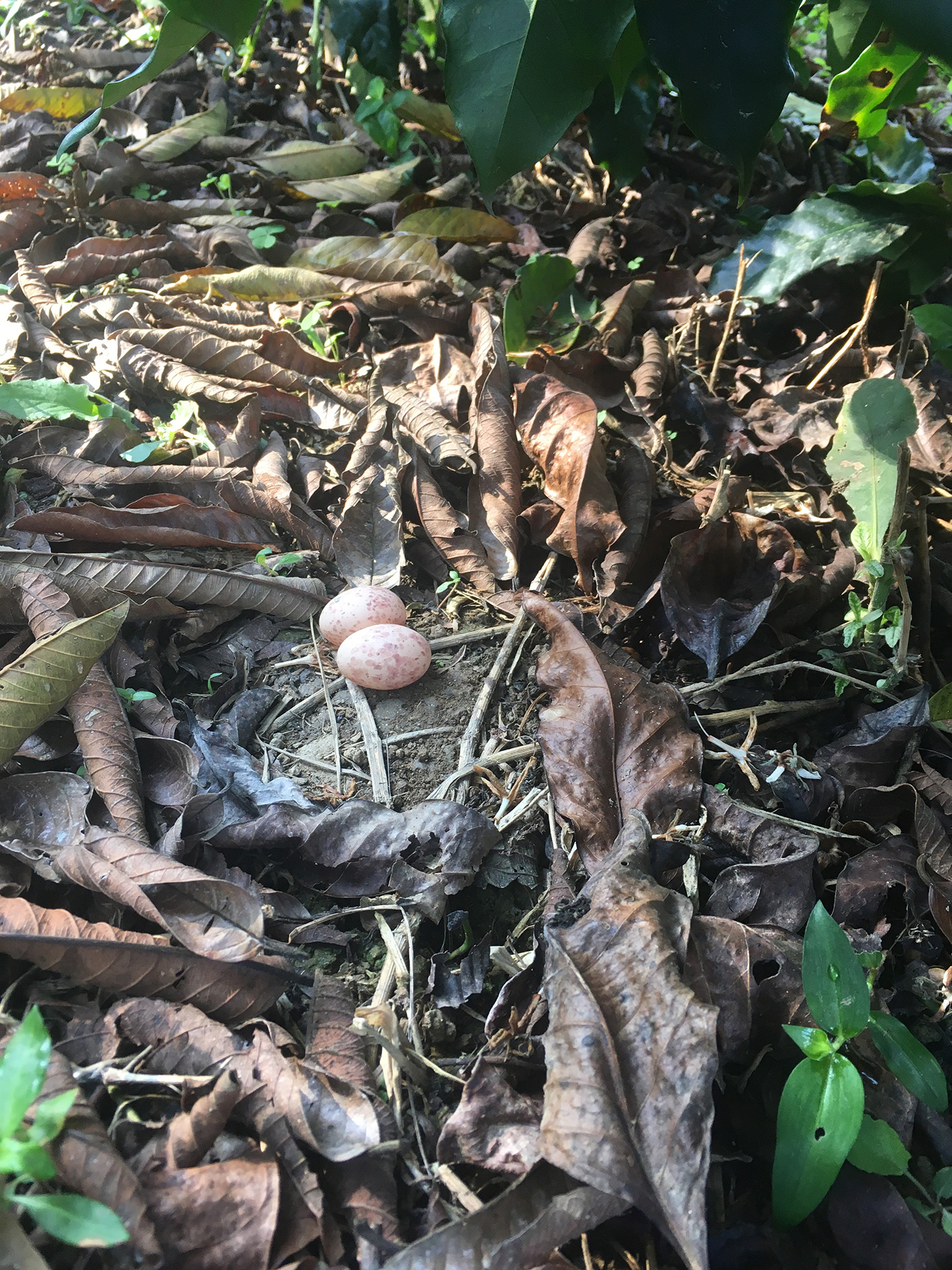 These nightjars are called “guarda caminos” or road guards, because they are often observed on roadsides at night, easily seen by light reflecting from their eyes. They are not bothered much by the presence of humans. This bird laid its eggs just 3 feet off the trail, right under a coffee bush. Common pauraques nest directly on the ground, without putting much effort into building an elaborate nest.

At Finca Puerto Rico, we found another nest on the vertical roadside bank. The dome-shaped nest was built using mostly mosses and dry vegetative matter. 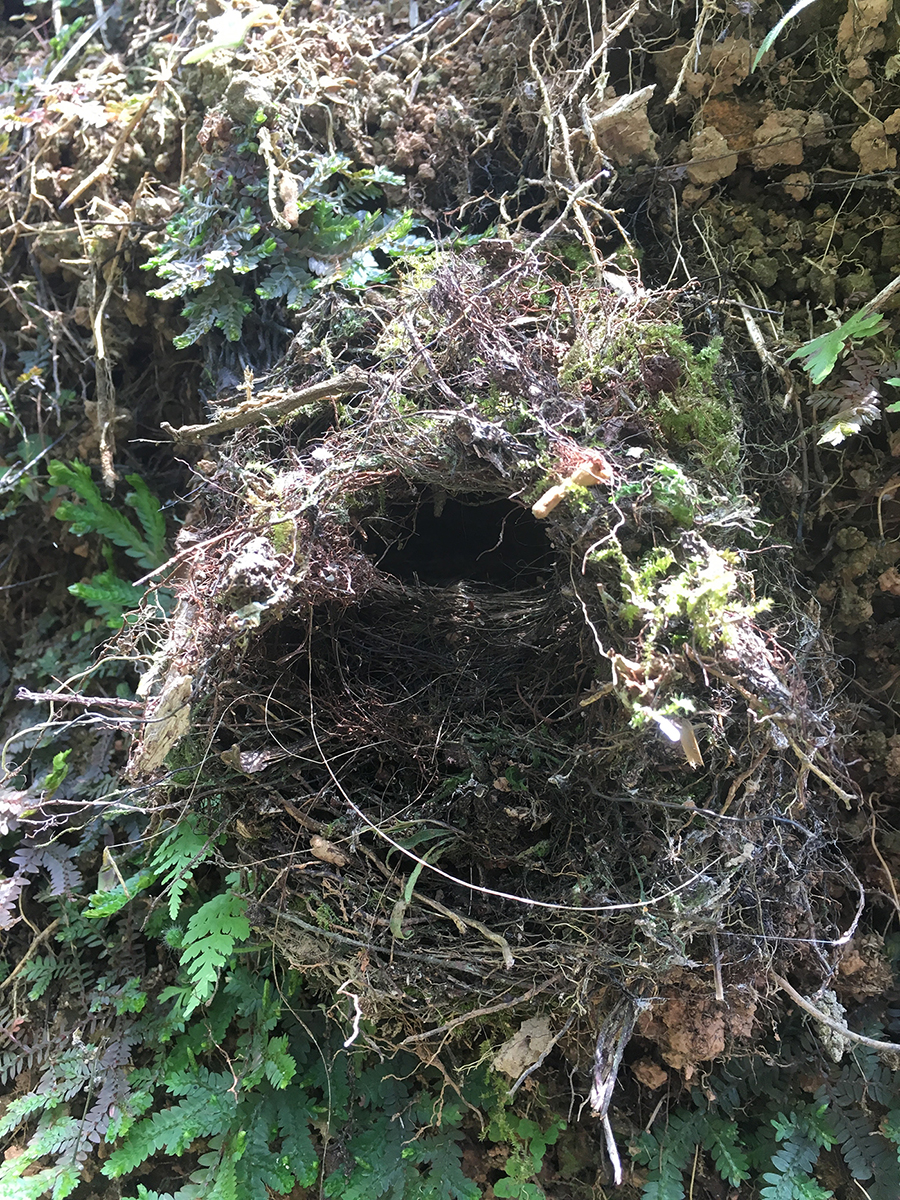 There were three eggs in the nest. Not many bird families in the tropics lay more than two eggs, so we had some guesses about which species this might be. 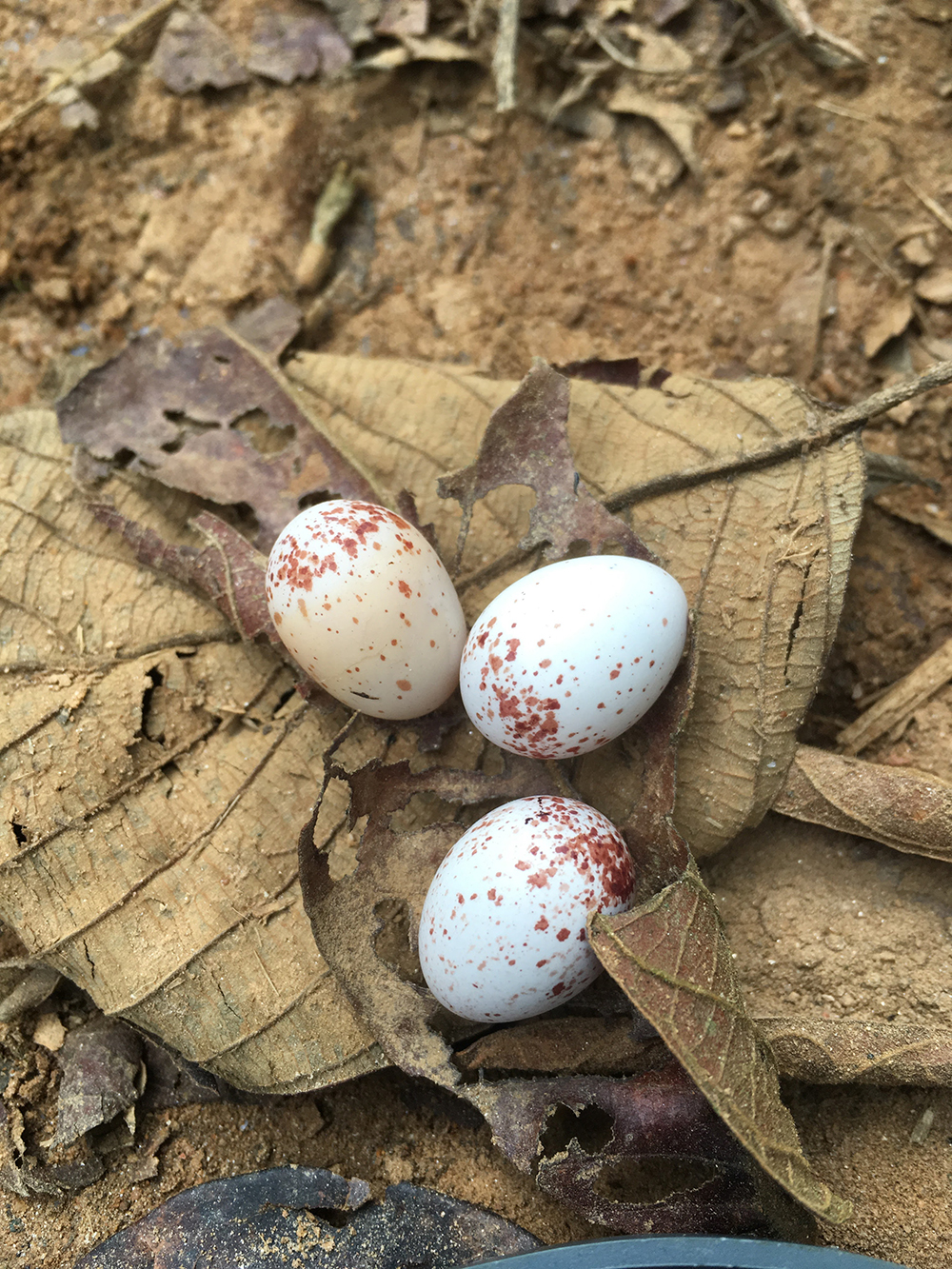 The small white eggs with brown speckles weighed only about 1.2 to 1.5 grams.

We set up a camera nearby the nest hoping to record the parents and identify the species. It was a successful effort. We identified the species as the blue-naped chlorophonia (Chlorophonia cyanea), a widespread bird in South America with an interesting, disjunct distribution around Amazonia. You can observe the incubating parent in this video:

Not only did we get to observe the incubating parents, a little further down the road within 30 meters of the first nest, we also found another pair of blue-naped chlorophonia building a nest. Both parents of this species assist in nest building, and the pair we observed was busy gathering materials in the understory. 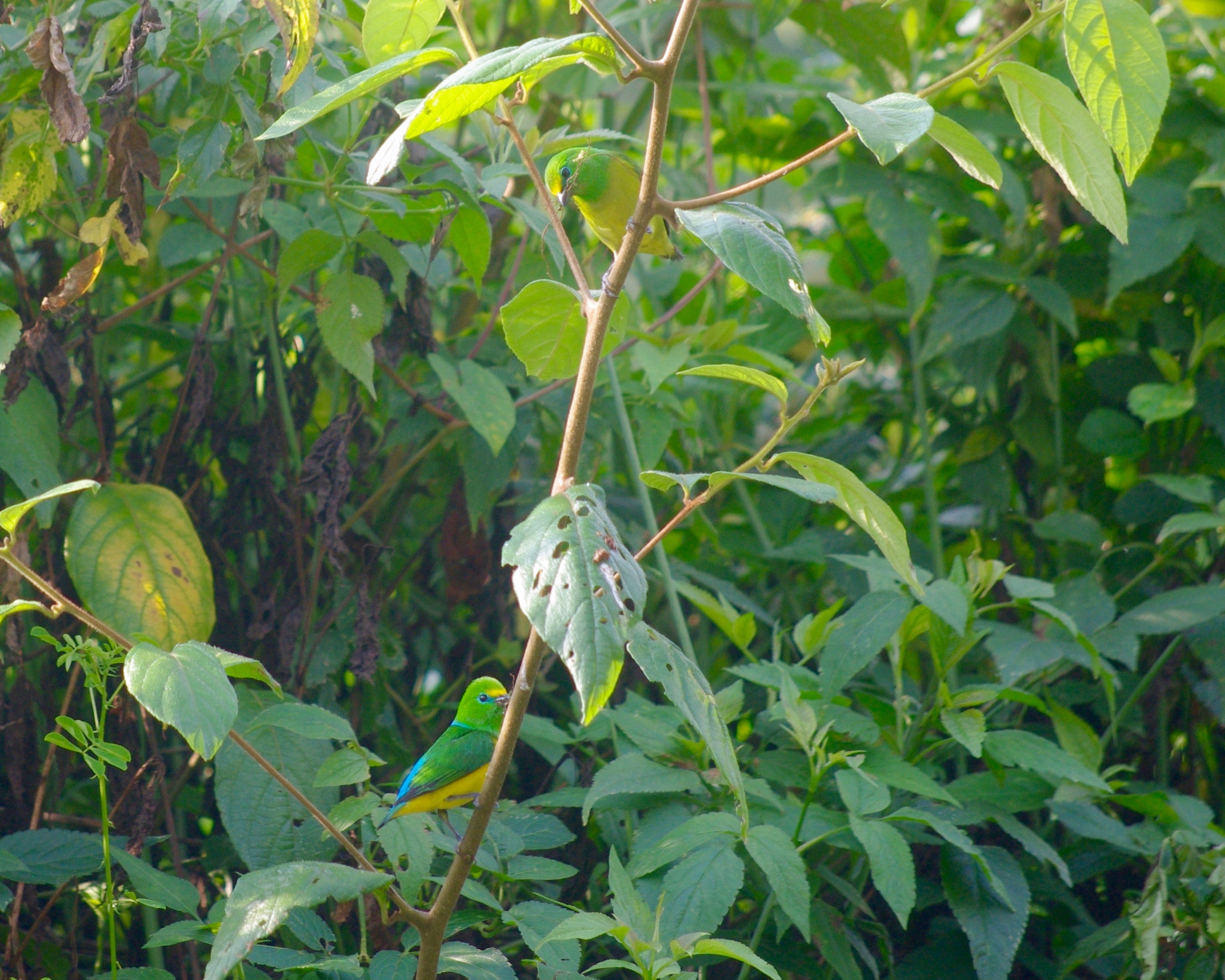 These small finches are colorful and not shy, posing for photos and showing off their namesake bright blue napes, blue rumps and eye rings.

The pair did not stop building their nest in our presence. They took turns bringing mosses to the small dome that they placed on the bank. 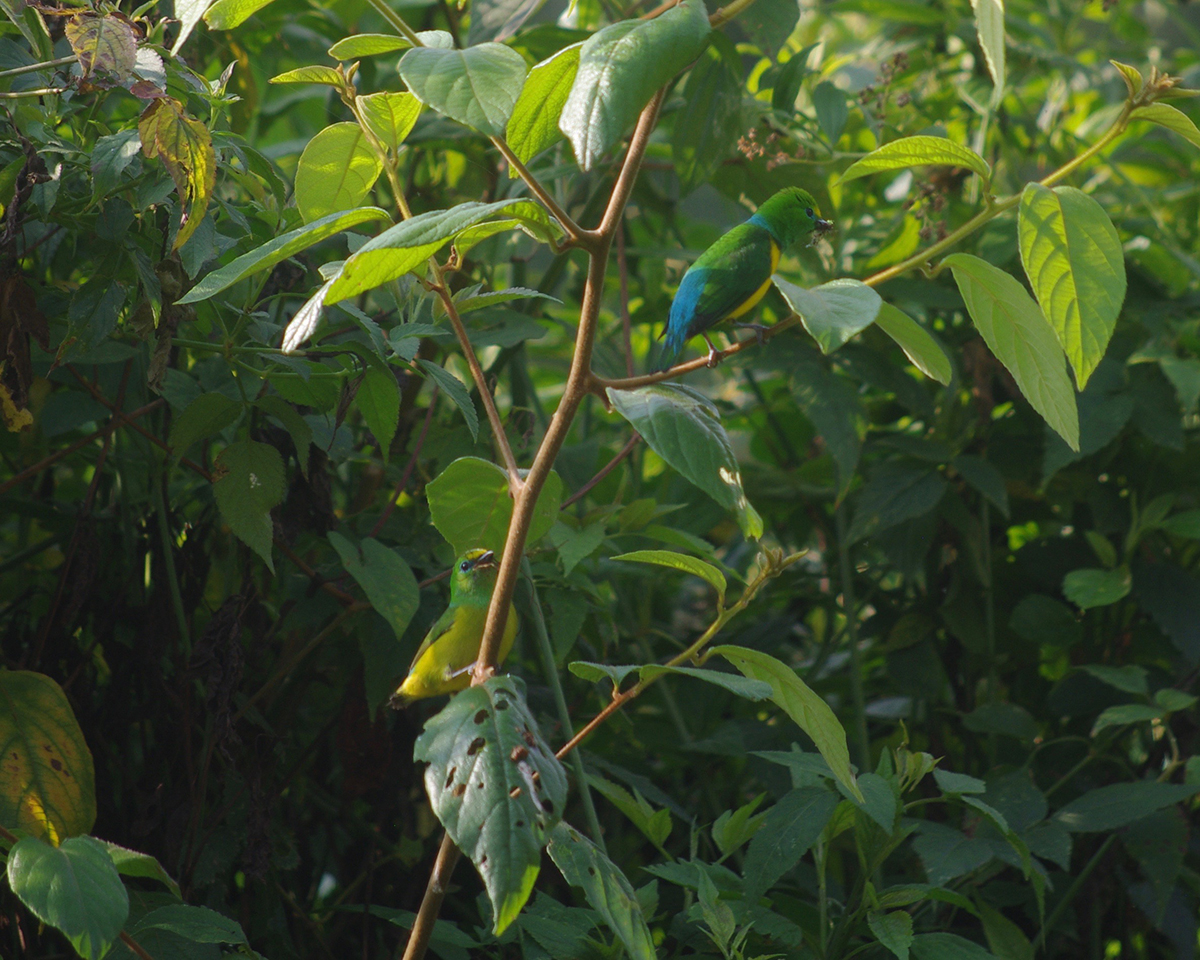 We also found nests at La Cabaña, another bird-friendly coffee farm at a lower elevation, just below about 1000 meters above sea level. We walked 10 to 15 kilometers daily, mapping all the trails, roads and paths within and between the farms. Finding interesting species and nests along the way was a treat! Another species that built nests on the roadside was the spectacular rufous-tailed jacamar (Galbula ruficauda). They dug a burrow in the vertical wall by the road. We saw a bird flush from the burrow, and subsequently observed one perched about 2 meters off the ground, foraging for flying insects. 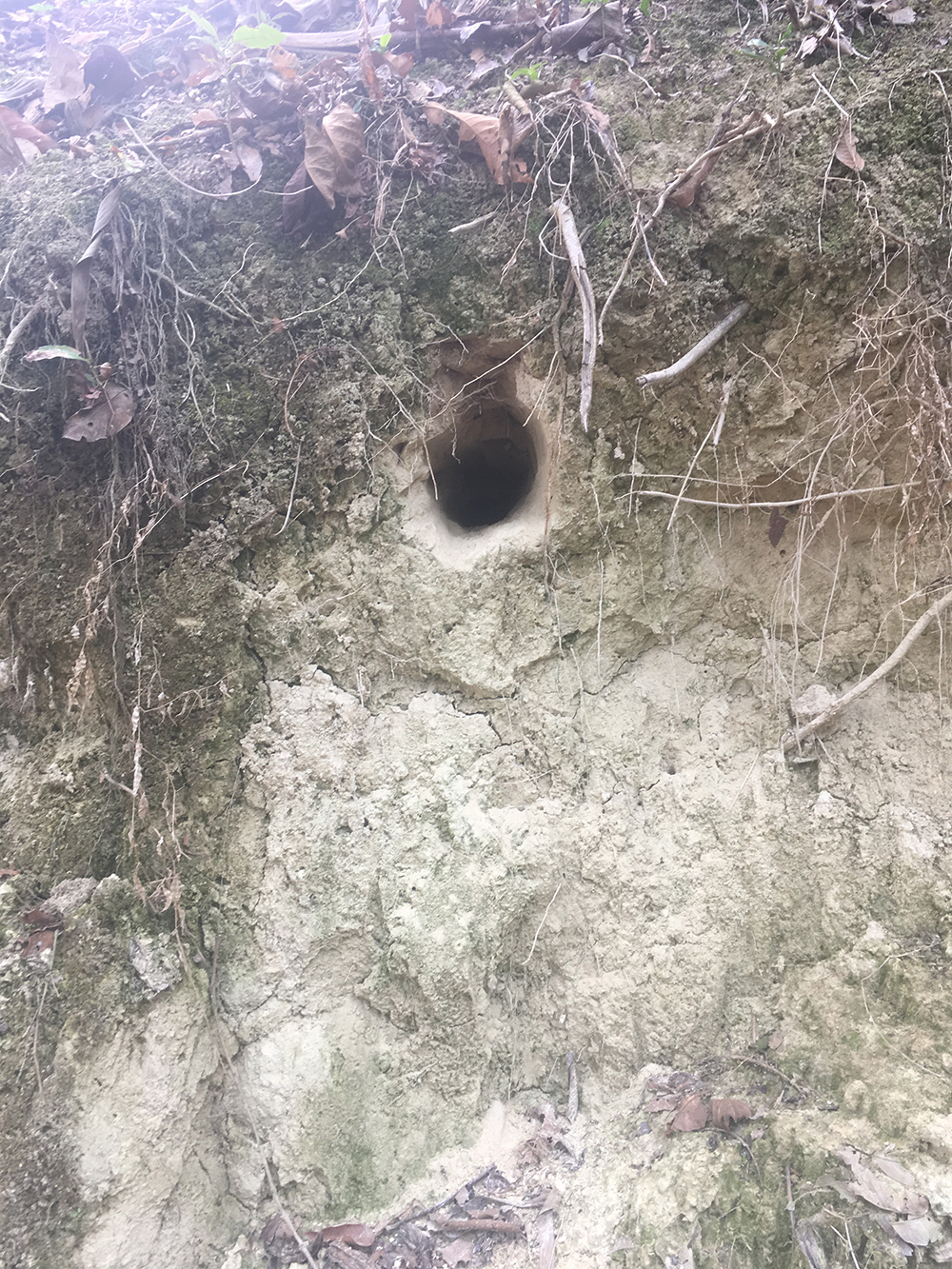 The mango tree next to one of the farm houses had a resident pair of hepatic tanagers (Piranga flava). The female was busy incubating, and her all-red partner brought her food every once in a while and chased her back to the nest when her break was over. 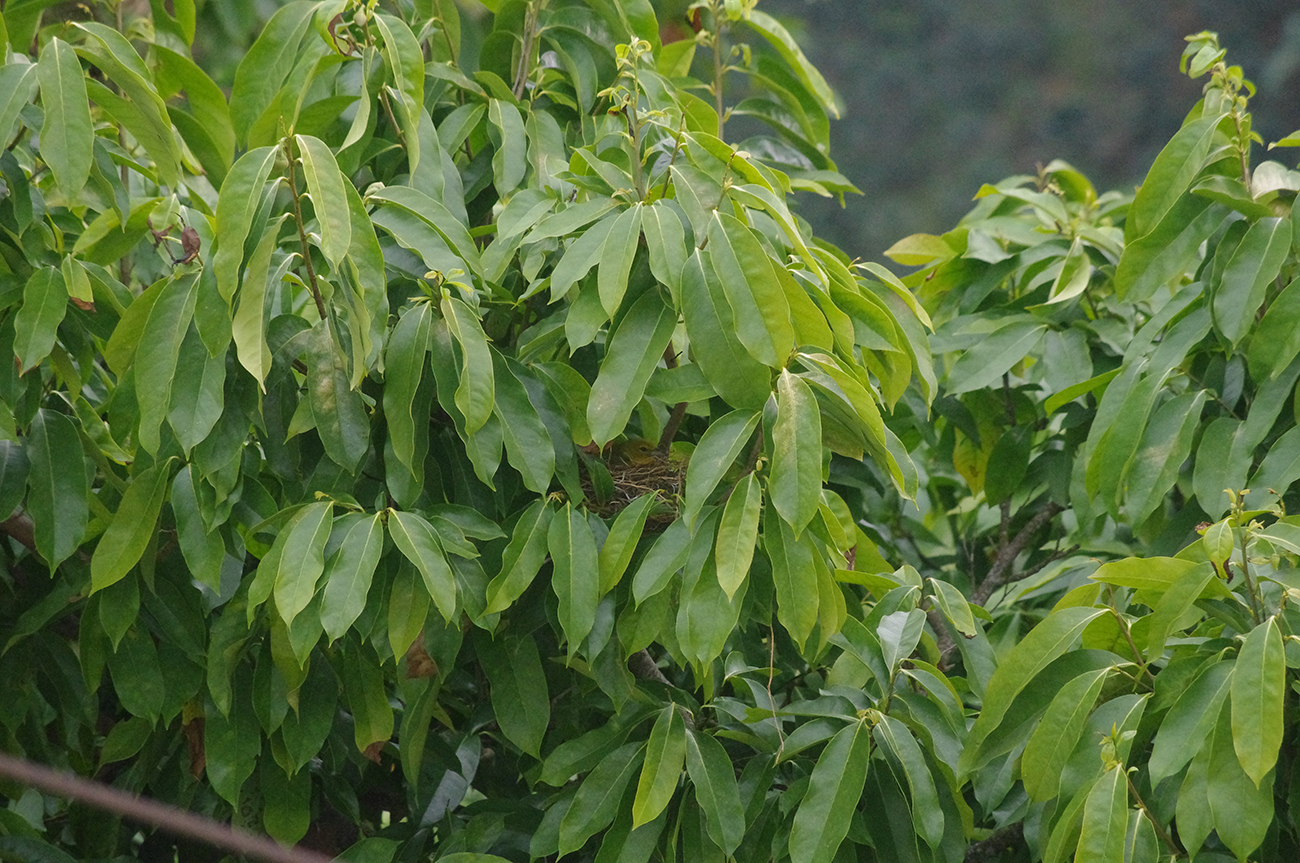 The three blue eggs were safely tucked in a simple cup nest made of two layers: twigs on the outside and softer grasses on the inside. 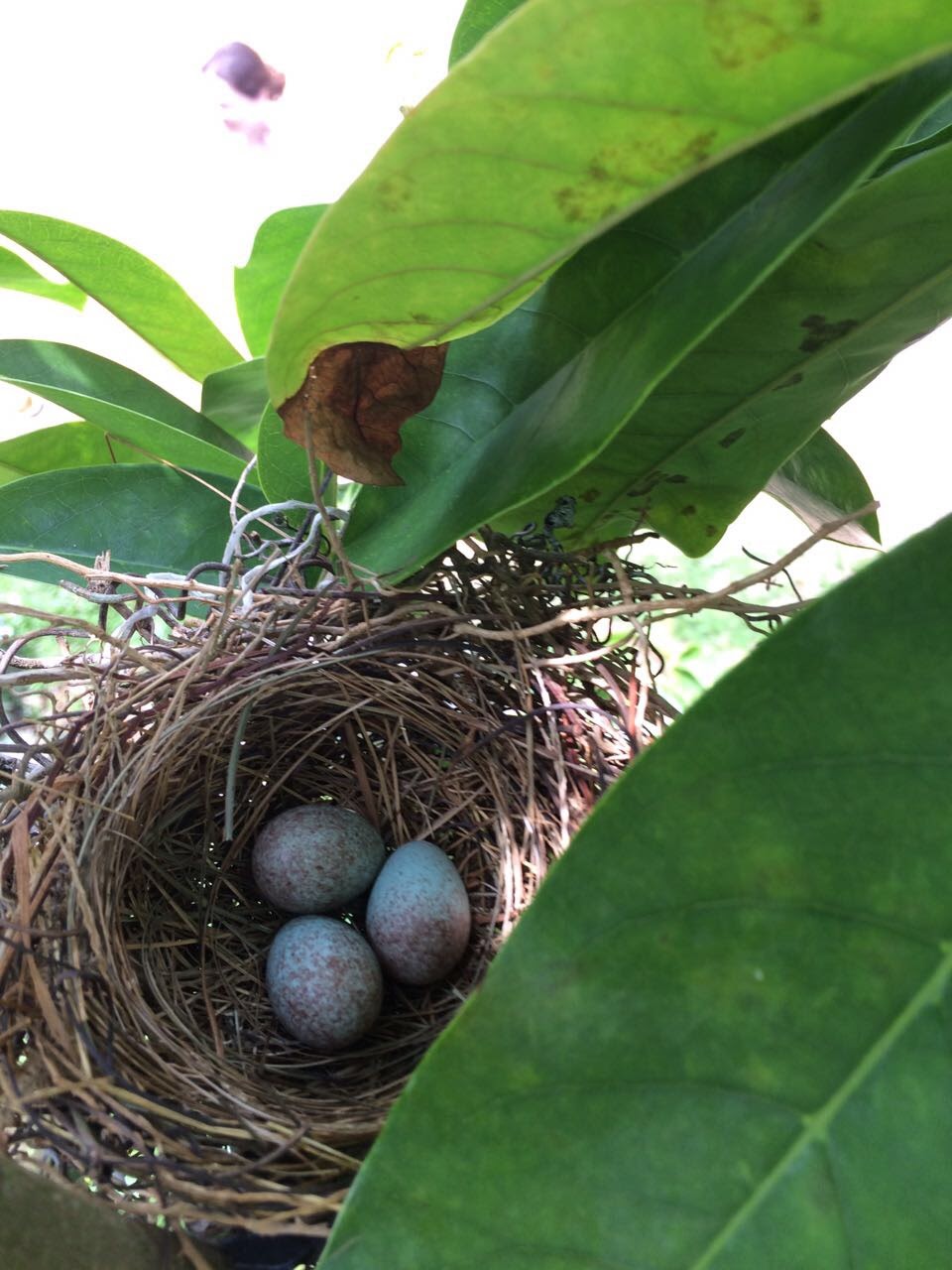 Some of the local thrushes have started their breeding season early, and we found two nests with young babies. 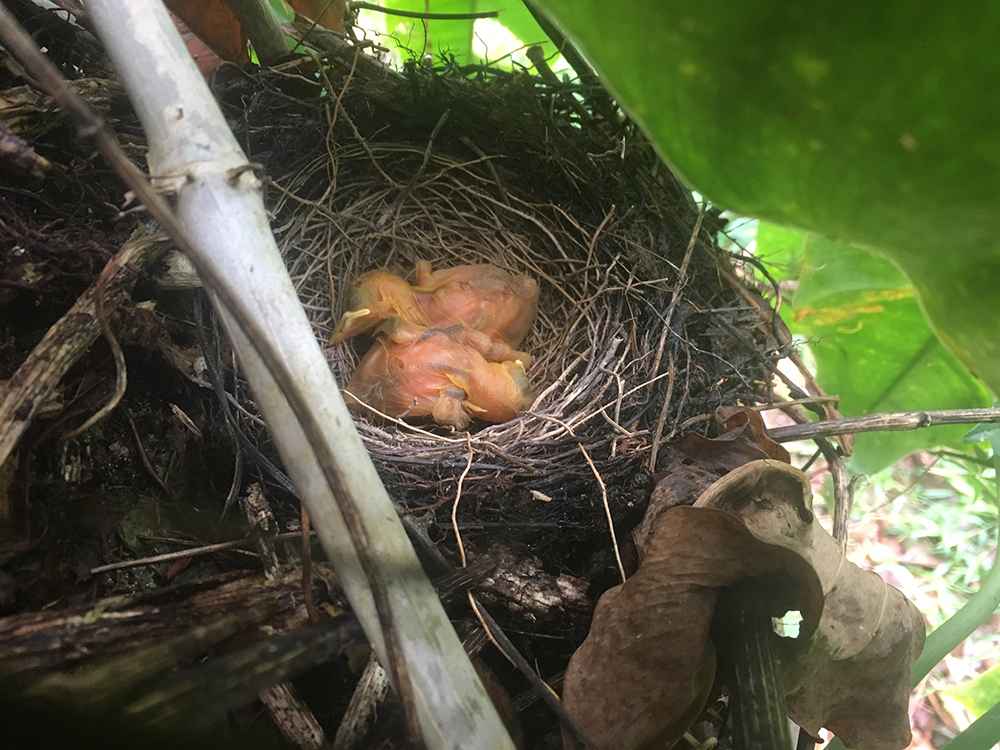 These two birds must have hatched just the day before we took this photograph.

The second nest had two recently hatched babies and an unhatched egg still in the nest. 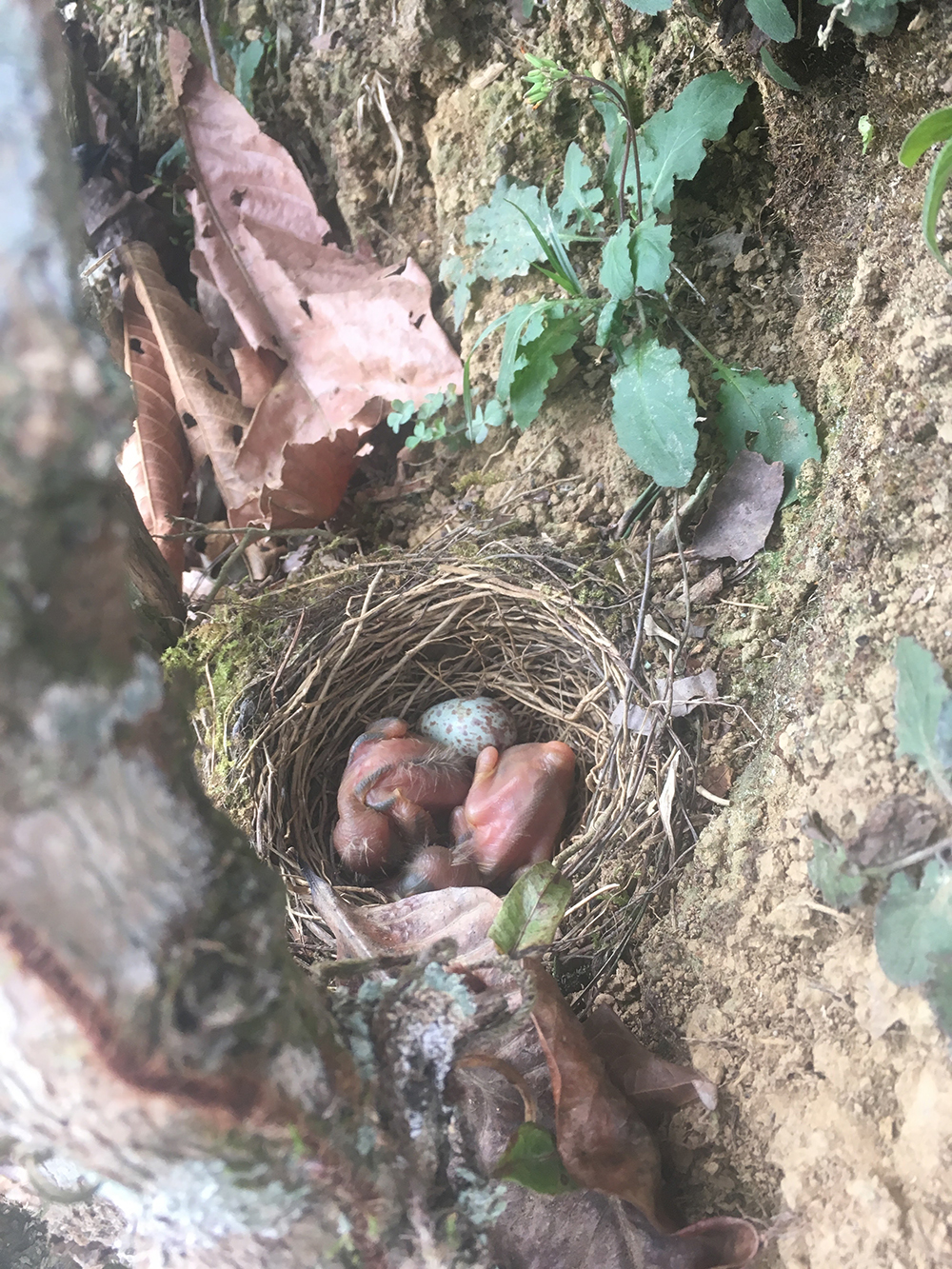 Building nests is time consuming, and it is fascinating to observe. The tiny flycatcher, a golden-faced tyrannulet (Zimmerius chrysops), in the following video was collecting moss and building a nest right in front of us. The nest was placed within about 15 meters of a house where all the workers were asleep. It is likely that 50 different people walk by the nest every morning and afternoon. But the bird selected that spot, deeming it good enough for nest placement and to spend the next month tied to that particular location while incubating and raising its young.

The birds were used to potential disturbance, and they were going about their daily routine in our presence. All the farms had evidence of reproductive activity: nests, nestlings, fledglings and free-flying juveniles that were still with their parents. These coffee farms provide important bird habitat for residents and migrants; birds use the shade trees and forest remnants. They find food, water and cover here. Keeping track of bird nesting success can provide important information about the habitat value of these agricultural areas.

La Sierra Nevada de Santa Marta of Colombia is an isolated mountain range separated from the Andes. Its highest peak reaches an altitude greater than 5,700 meters (18,700 feet), while the range is surrounded by lands with elevations below 200 meters (660 feet). The mountains are within 30 miles of the Caribbean coast. This unique area hosts incredible biodiversity, high concentration of endemic species and serves as an important point for migratory bird species, as a stopover site and as wintering habitat. In addition, these mountain slopes are producing high-quality coffee. 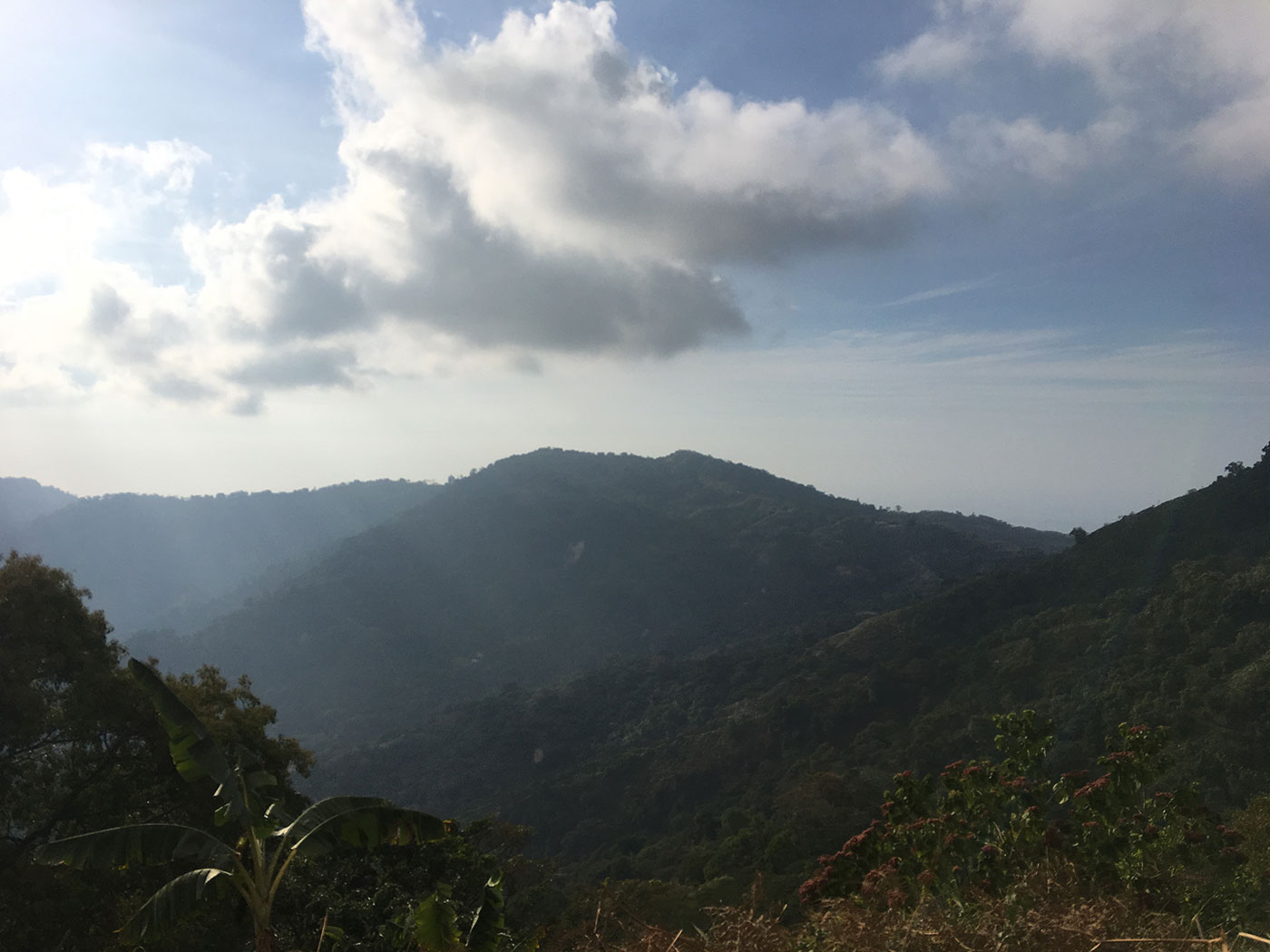 These slopes are steep. There is no other way of harvesting these coffee beans than by hand, selecting the ripest of the coffee cherries. March is post-harvest time here. Therefore, the coffee bushes had no flowers or coffee on them. 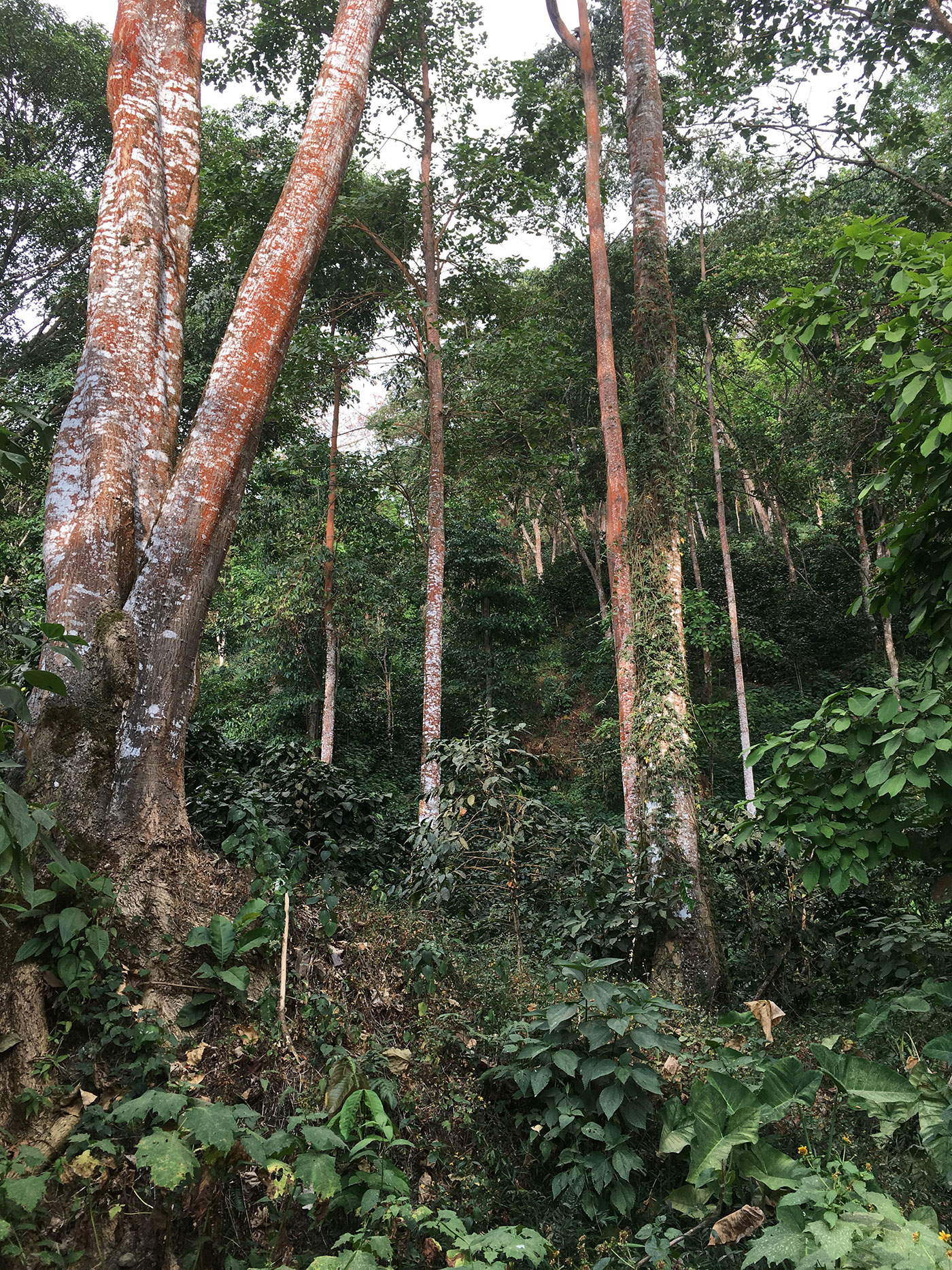 Working on the Smithsonian Bird Friendly Coffee project allowed us to explore this region of Colombia. We first set out to Minca, a small mountain town close to the city of Santa Marta, that served as base camp. The first morning there, we took a mototaxi ride uphill to Cerro Kennedy, all the way up to 2400 meters elevation. This 18 kilometer ride took about an hour and a half on a motorcycle, and we were prepared to walk while birding all the way down, looking for species of interest for the project.

Here are some of the residents that we saw on this 9-hour trek downhill:

One of the first species we encountered was an endemic bird. The Santa Marta mountain tanager was not shy at all, happily foraging just a few meters from us in the relatively sparse vegetation. 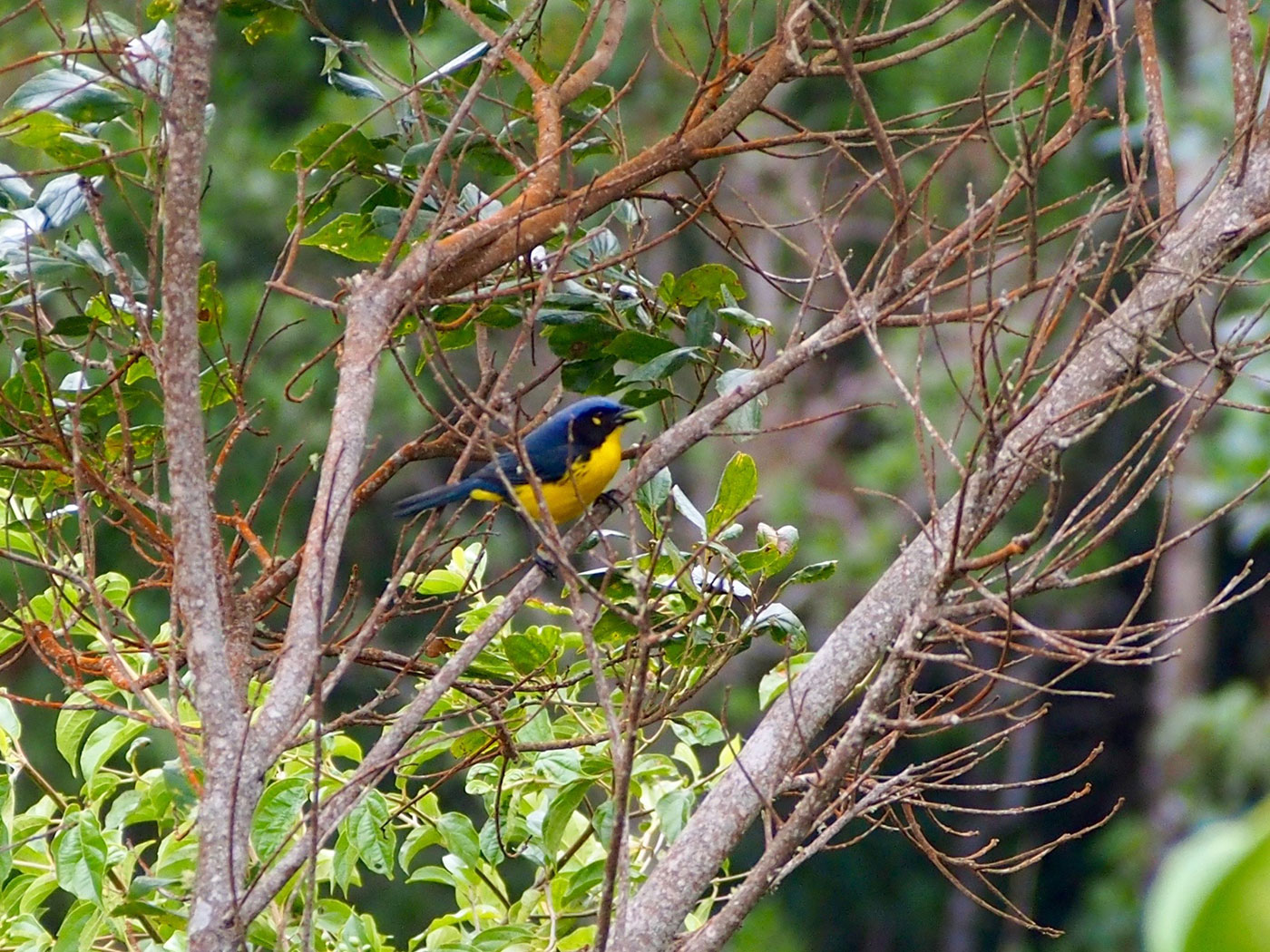 Next, we heard loud crashes through the branches, as a sickle-winged guan (Chamaepetes goudotii) tried to fly away from us, clumsily. Luckily, it perched nearby to pose for us. We saw this species crossing the road right in front of us later, as well. 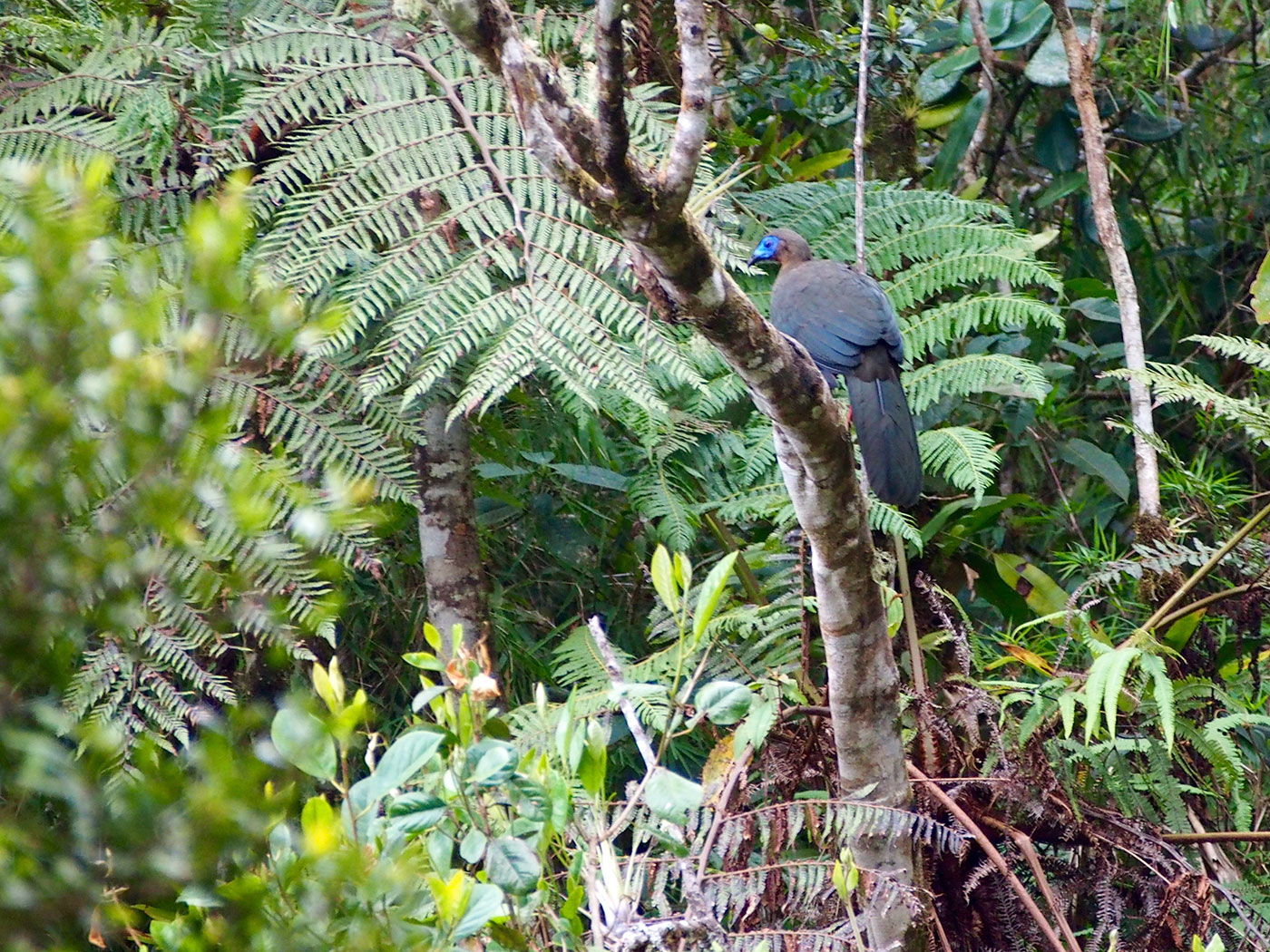 As we carefully made our way down the road, a cute little flycatcher called at us from the shrubs. Yellow-bellied chat-tyrants (Ochthoeca diadema) have an adorable unibrow look. 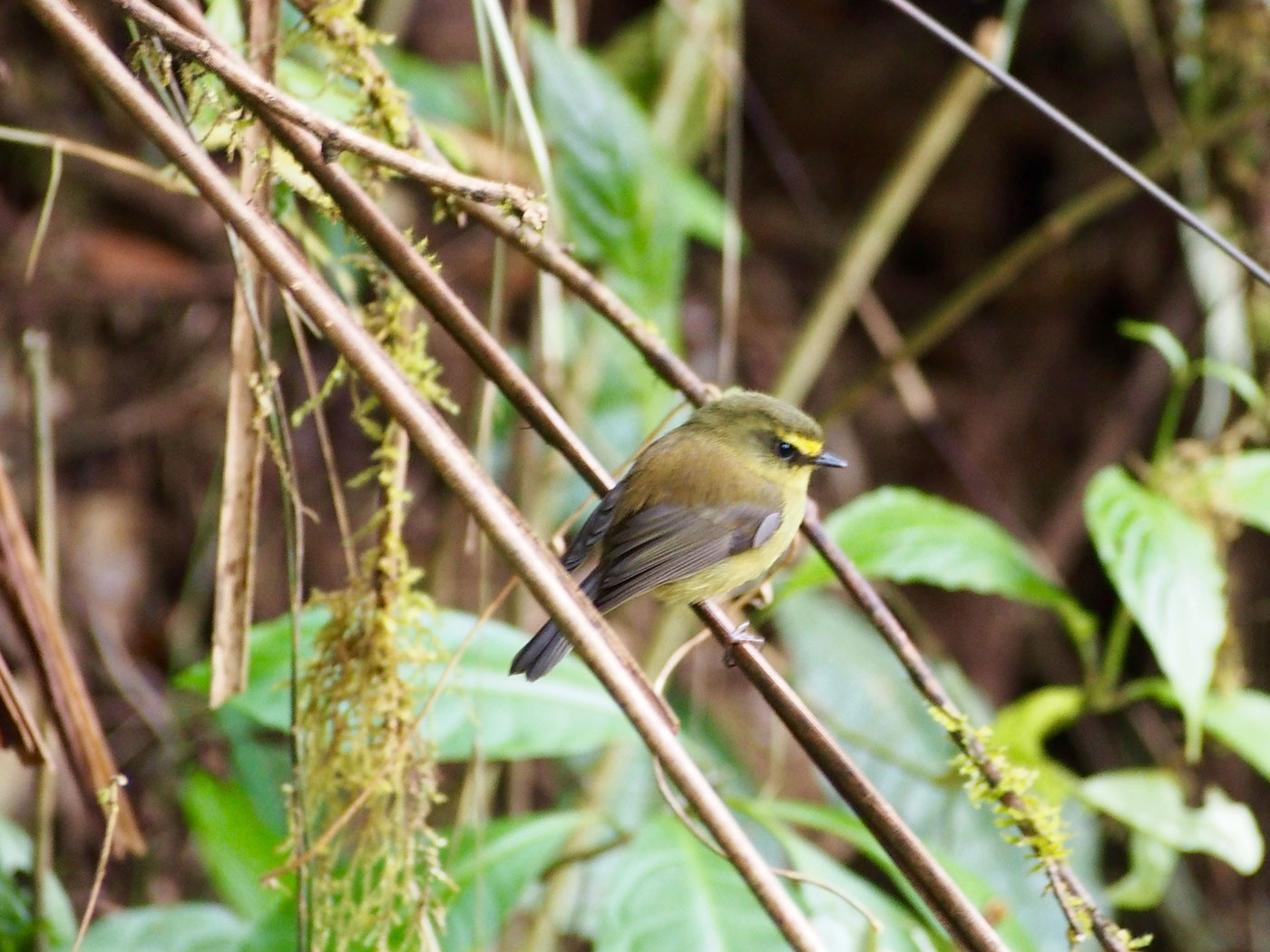 A few hundred meters downslope near San Lorenzo, we found another endemic right near the road. This species was quite abundant but always skulking low. The Santa Marta brush finch (Atlapetes melanocephalus) has a restricted range but does not mind degraded habitats, secondary forest and even roadsides. 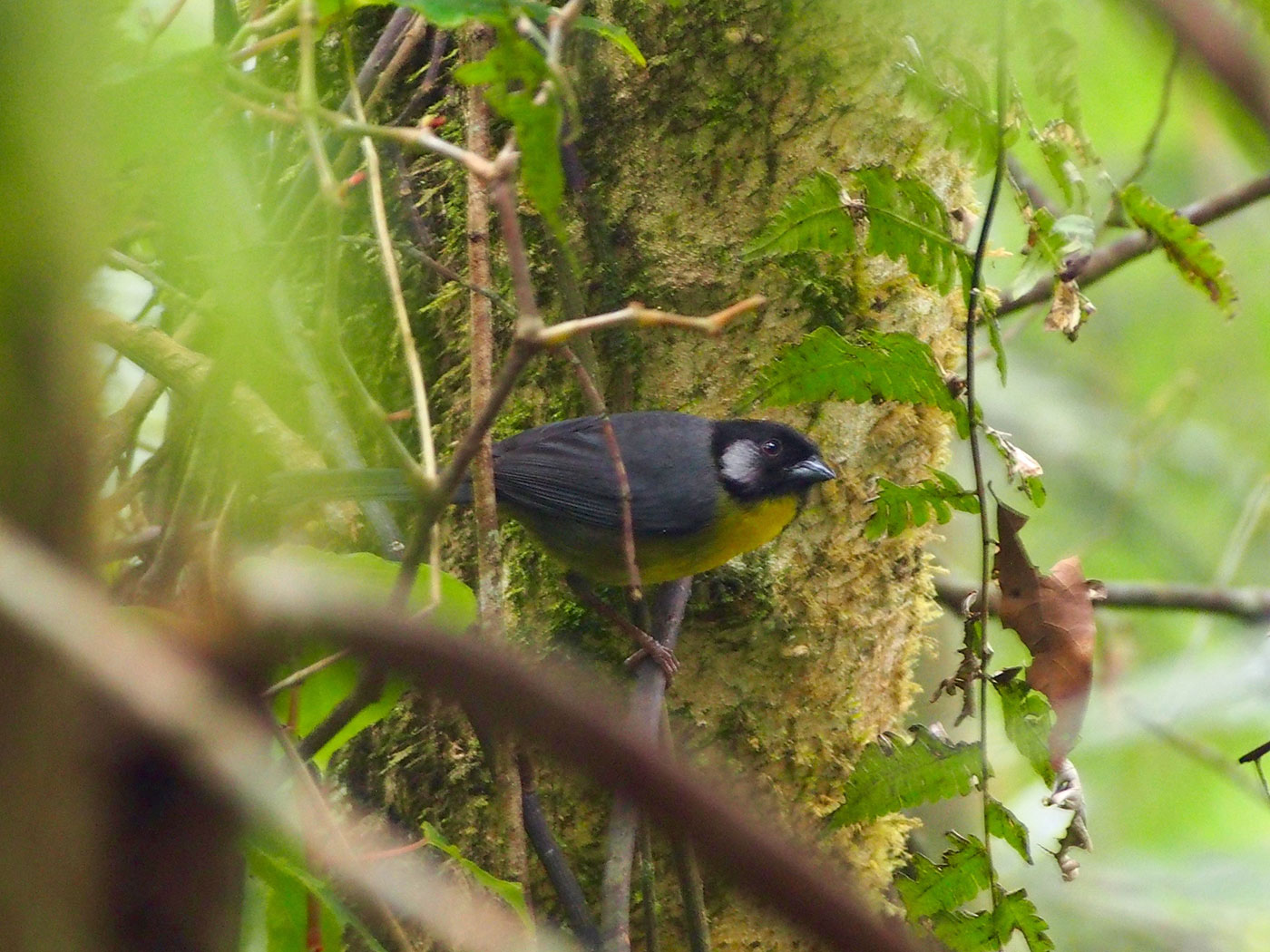 Noisy flyers were making a ruckus overhead. As we got to a more degraded area with a few tall trees, a small group of emerald toucanets (Aulacorhynchus prasinus) was foraging for fruits, hopping from branch to branch. 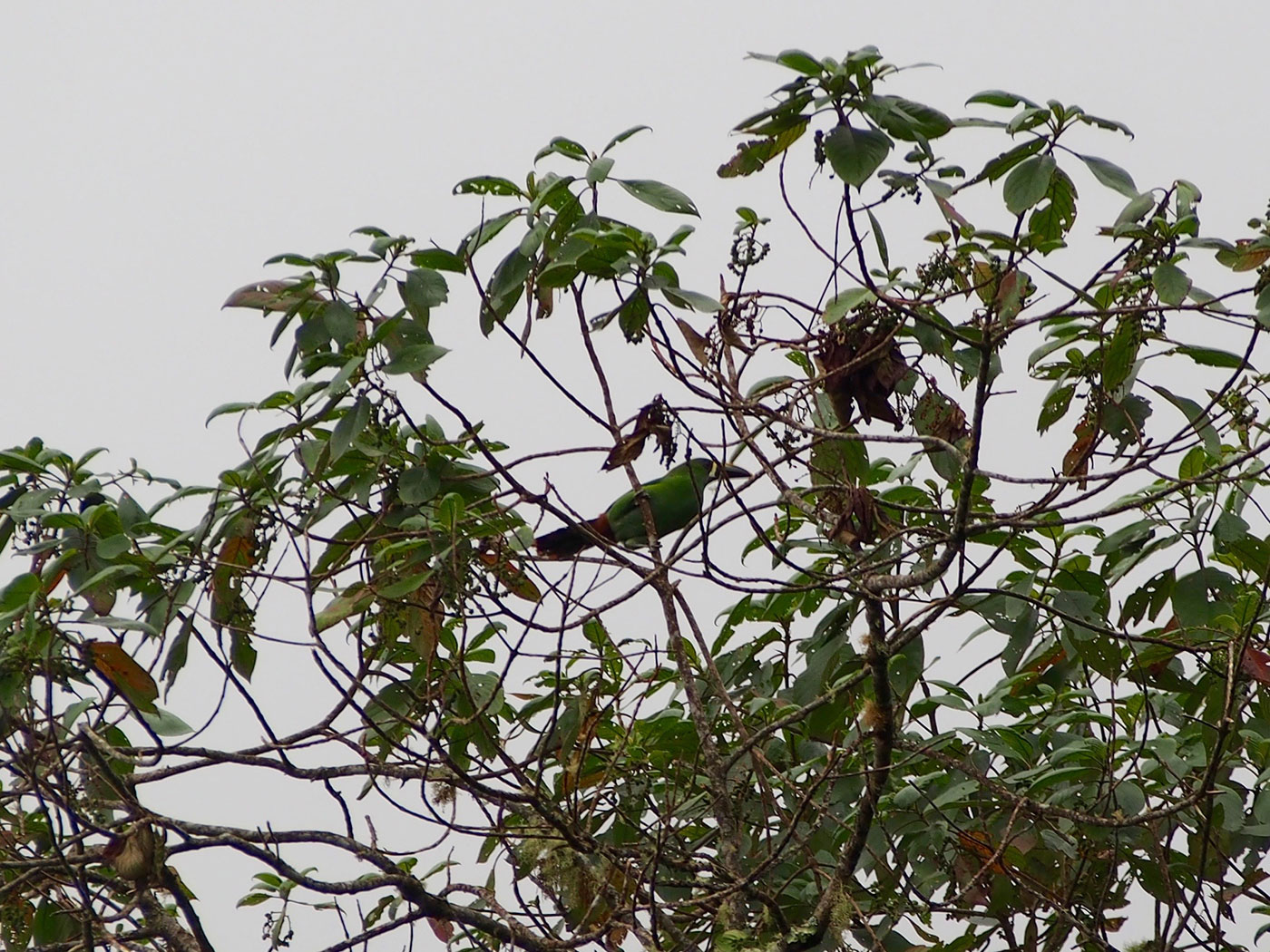 The rainy season has not started yet, so it was dry and dusty on the road. There were small waterfalls along the way and some puddles, which turned out to be a gem. This gorgeous bird was taking a bath right in front of us. The violet-bellied hummingbird (Damophila julie) is tiny but brilliant. 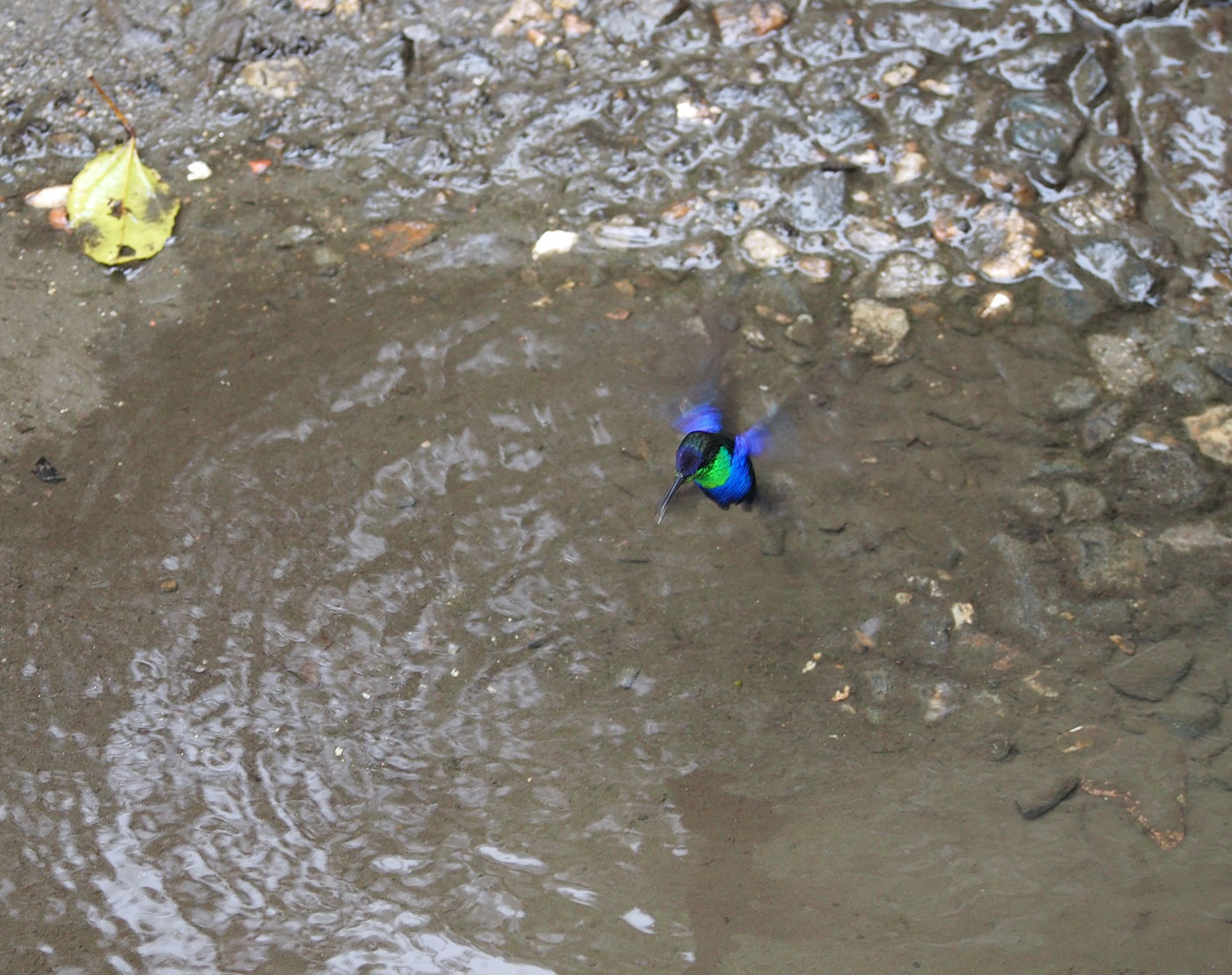 We heard a familiar sound calling and, moments later, a female masked trogon (Trogon personatus) perched on a branch near a landslide. 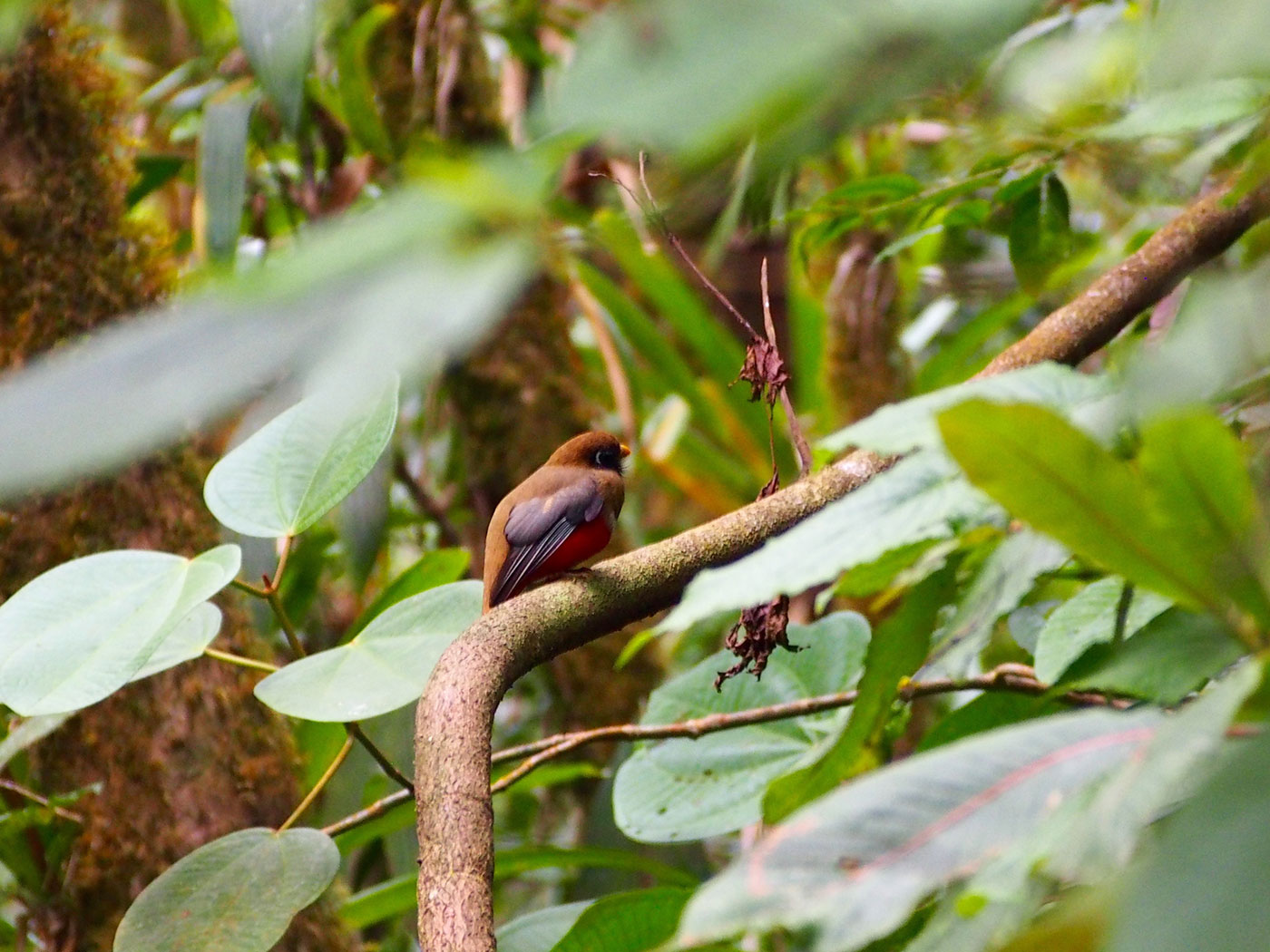 Her male partner was not far but a lot more hidden in the vegetation, calling for her to come closer. 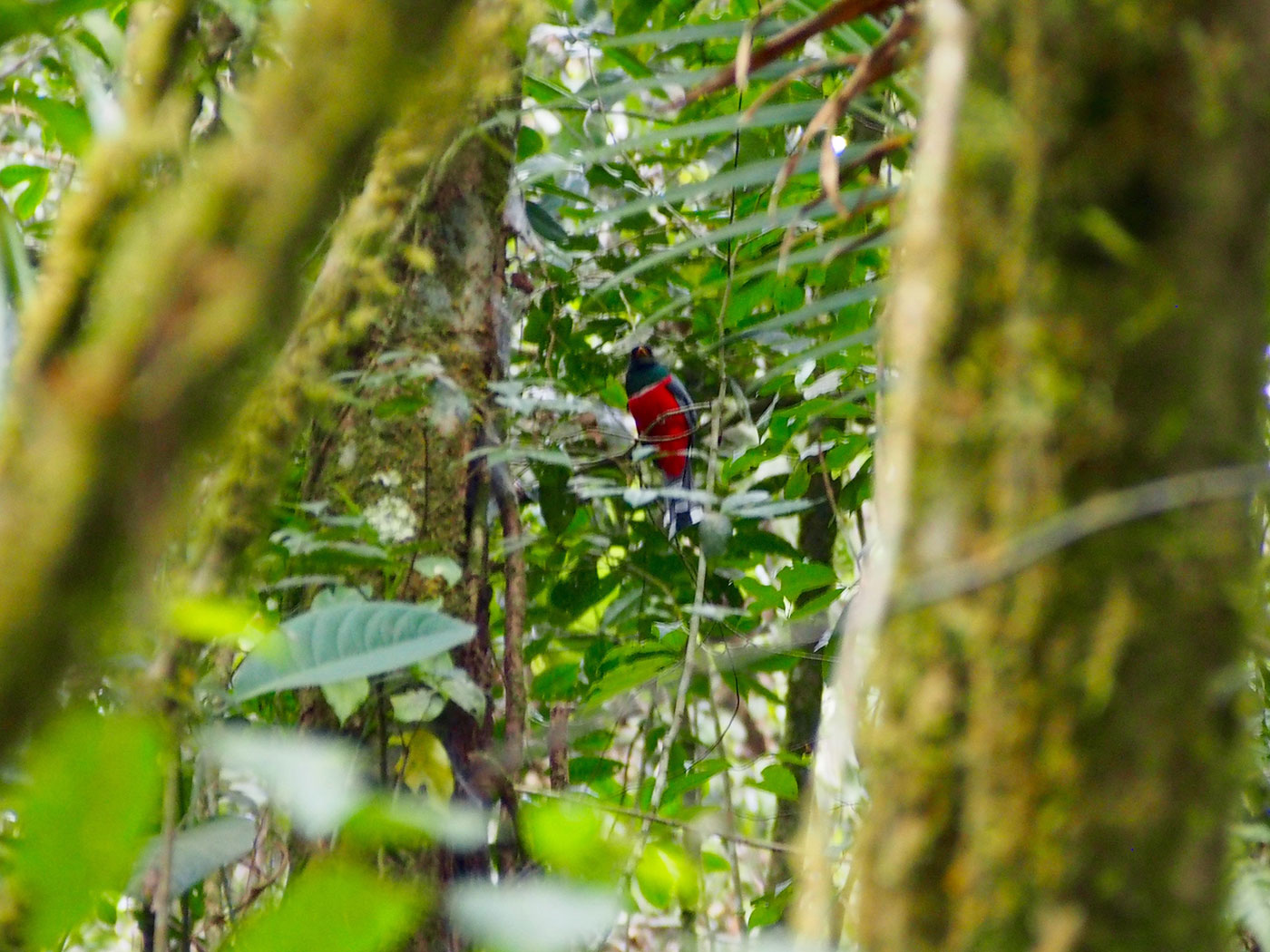 A cinnamon flycatcher (Pyrrhomyias cinnamomeus) sallied right in front of us from a branch on the edge. A family of four was foraging side by side. It looked like two fledglings were still being fed by the parents, but also practicing their skills on their own. 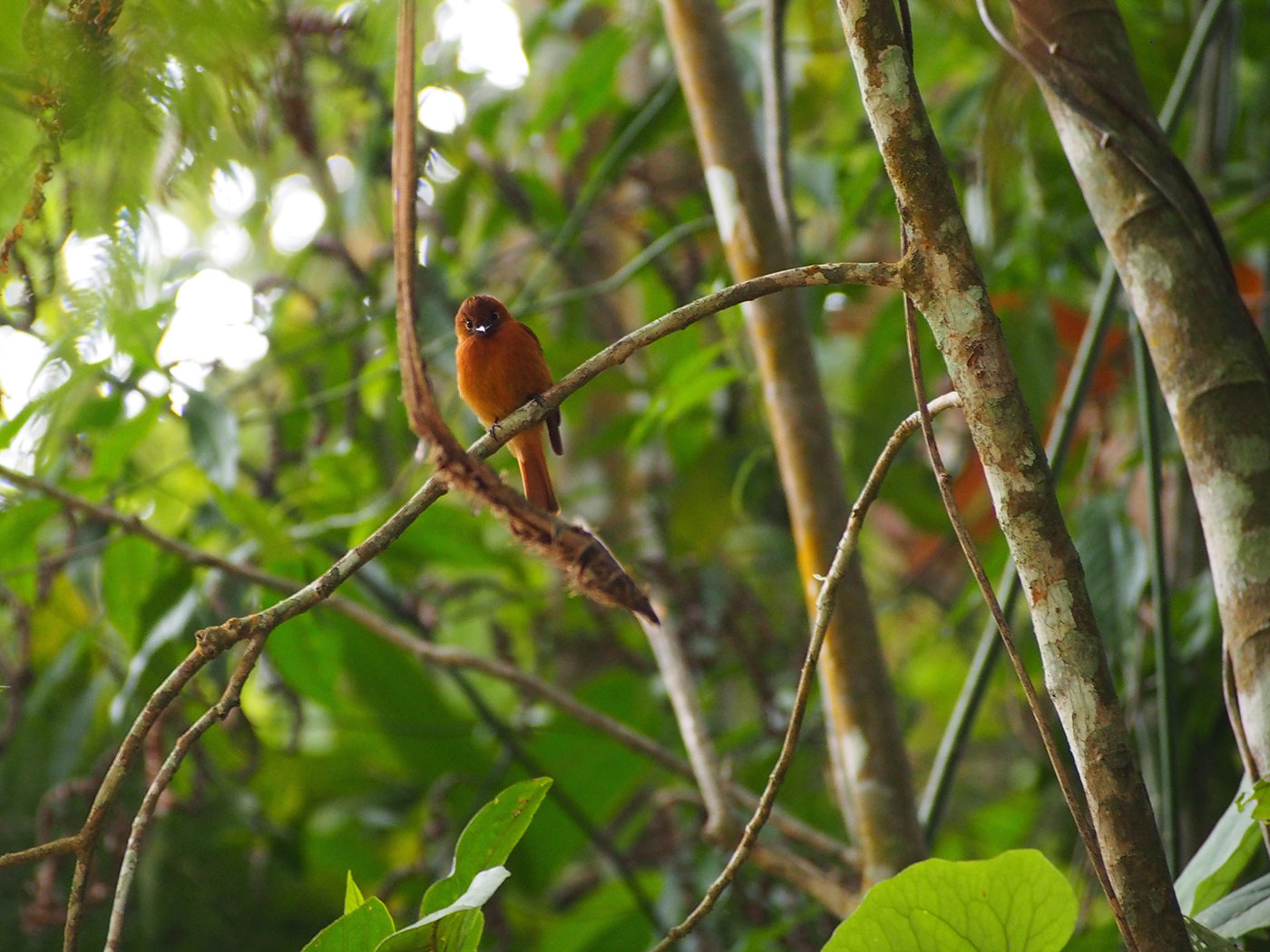 Wood warblers were all around us, many migrants, but also some of the resident species. The slate-throated whitestart (Myioborus miniatus) is strikingly colored. We only got a picture of the female, but she is a beauty nonetheless. 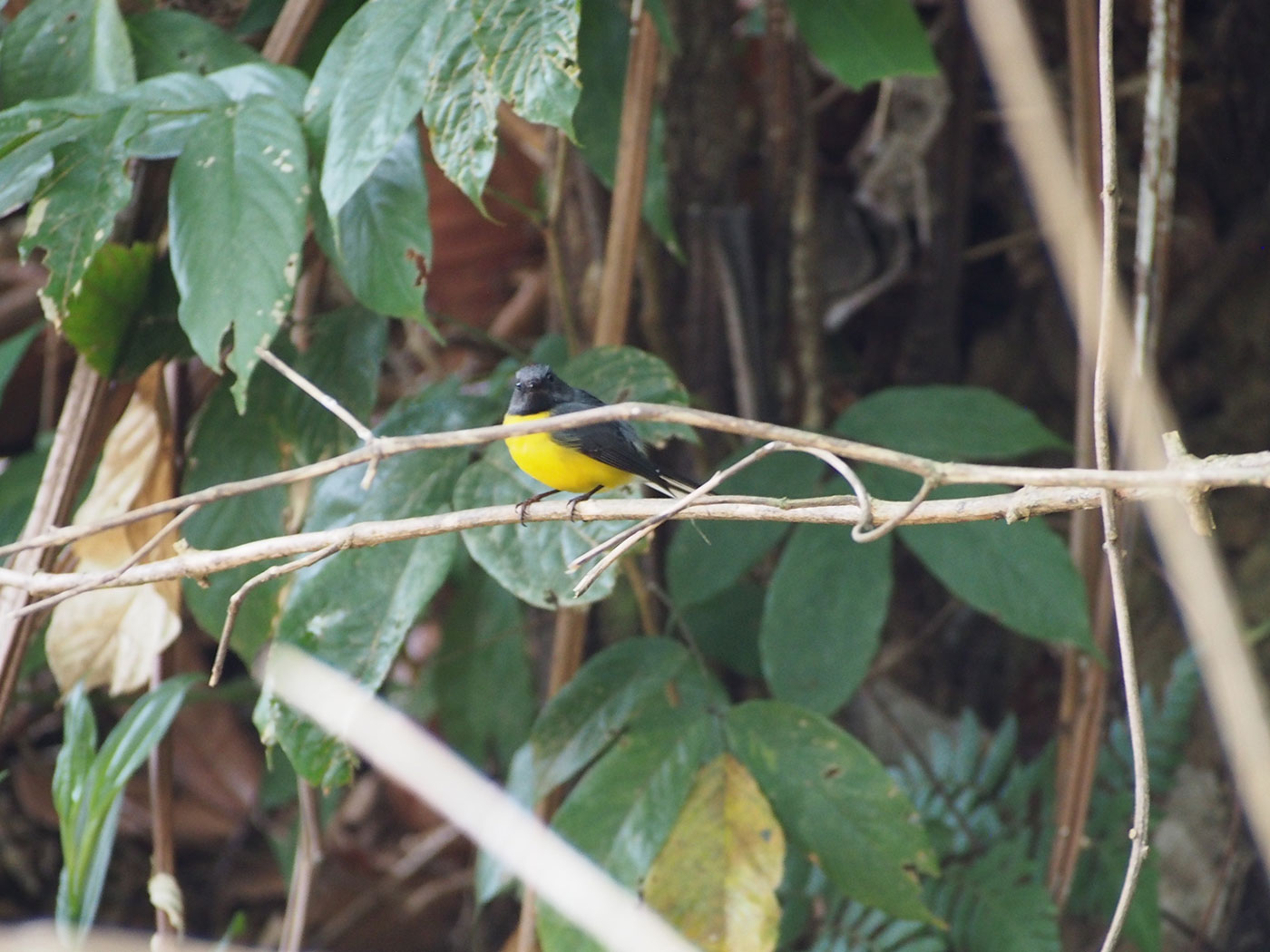 These species are using habitats right along the roadside. The cloud forest slowly turned into more and more agricultural land, as we worked our way down to Minca, which is less than 700 meters above sea level. All the farms along the road had at least some shade-tree cover. Many were polycultures with citrus, papaya and banana growing among the coffee plants. There is not much forest left below 1000 meters elevation, but birds, lizards and even squirrels were abundant, using all sorts of habitat around us. Our research goal is to find out what landscape configuration and composition works best for both wildlife and people growing coffee. How can we optimize habitat conservation and still provide a livelihood with agriculture? Stay tuned for answers.