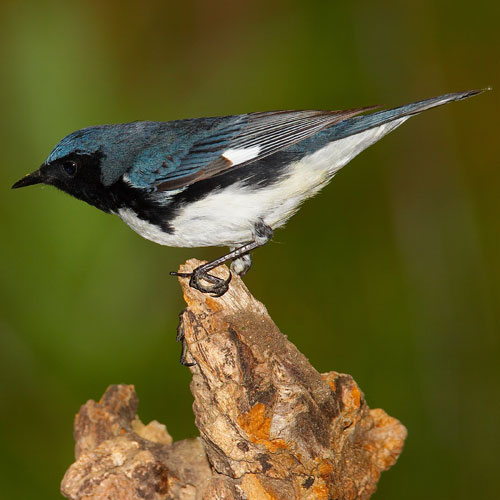 In summer in the Appalachian Mountains, its buzzy zoo zoo zoo zee song can often be heard drifting from dense stands of rhododendron and mountain laurel. As the naturalist Lynds Jones wrote in 1899,

“The song is uttered in a spirited manner while the bird is feeding and flitting about in the foliage, interfering with his feeding only as a sort of after-thought, causing a momentary pause as the bird raises his head and straightens his body for the effort. It is one of the warbler songs that is easily recognized and not readily forgotten.”

The black-throated blue is our most "sexually dichromatic" wood warbler, that is, females and males differ strongly in color.

In fact, this difference is so dramatic that the two sexes were considered separate species by ornithologists in the early 1800s.

Black-throated blue warblers are temperate/tropical migrants, and spend most of the year in the tropics. They leave their northern breeding grounds in late summer, and arrive on their winter quarters in the Caribbean by mid-October.

Most individuals overwinter in the Greater Antilles: Cuba, Jamaica, Hispaniola, and Puerto Rico. In April, warblers leave their winter haunts and migrate north again to breed, arriving back on their breeding grounds by mid-May. 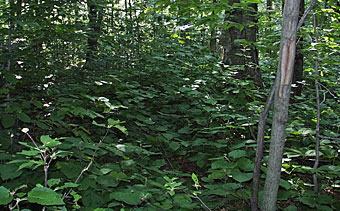 Unlike populations of many migratory songbird species, most black-throated blue warbler populations don't appear to be heavily affected by human activity, and have been stable for several decades. This stability is due in part to the relatively undisturbed condition of forests in the core of its breeding range, northern New England.

In addition, black-throated blues appear to be tolerant of disturbance on their winter quarters, where these birds occupy a variety of habitats, including primary forest, secondary woodlands, and human modified habitats such as rural settlements and coffee farms.

The long-term stability of black-throated blue warbler populations makes this an ideal species for studying the processes that determine its distribution and abundance. Indeed, more is known about the ecology and behavior of this warbler than any other migratory songbird species breeding in North America.

Survival and reproductive success of black-throated blue warblers are both affected by variation in weather associated with a global climate cycle, the El Niño Southern Oscillation, or ENSO.

In El Niño years, survival of warblers can be lower than average. Similarly, the number of young fledged on breeding grounds, as well as fledgling weight, are low during El Niño events. In contrast, survival of adults and their reproductive success are better than average in La Niña years.

The reasons for this pattern are complicated, but can be explained in part by weather-related variation in the abundance of the warbler's principal food: insects and spiders. In El Niño winters, conditions are drier than normal in parts of the Caribbean. Reduced rainfall likely reduces the amount of insects available to overwintering warblers.

In some parts of the warbler's breeding range, El Niño springs appear to be cooler than normal. Cool spring weather seems to result in fewer caterpillars in June and July when black-throated blues are feeding their young.

In La Niña years, rainfall can be more abundant in parts of the Caribbean, and spring temperatures tend to be warmer than average. Warmer springs on breeding grounds and more rain on winter quarters seem to result in more available food.

In both breeding and wintering areas, adults show strong fidelity to territory sites, often returning to the same cluster of shrubs year after year. Some black-throated blues live to be 7 or 8 years old; however, only 50 ' 55% of males typically survive from one year to the next, while 40 ' 45% of females survive from year to year. Thus, less than 1% of individuals survive for 8 years.

When does most warbler mortality occur' Based on recent research, 99% of adults survive from month to month during the stationary periods, i.e., during summer and winter when birds aren't migrating. 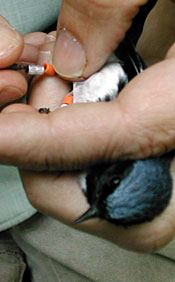 In contrast, only 70 ' 85% of individuals survive each month during the spring and fall migratory periods. In other words, mortality rates during migration are at least 15 times higher than during summer and winter.

These results are probably typical for temperate ' tropical migrant songbirds. However, survival of migrating black-throated blue warblers, as well as other species, is probably determined by many factors. Events during the stationary periods, such as overwintering in drought-affected areas, can have adverse effects on the birds' physical condition.

Even so, these species do have high survival rates in the stationary periods, even in low-quality habitat or in areas negatively effected by climatic phenomena, such as ENSO. Thus, the influence of both breeding and overwintering seasons on adult survival might not be manifested until birds start to migrate.

Survival of migrating black-throated blues is certainly affected by events during passage as well, including storms, collisions with communications towers and tall buildings, and a lack of suitable stopover sites.

Like most wood warblers, black-throated blues are socially monogamous during the breeding season, although a small percentage of males are bigamous in areas of high-quality habitat. However, there's more to the mating system of this warbler than meets the eye. Females often sneak off their territories to mate with males other than their mates, and these "extra-pair" males are happy to oblige. 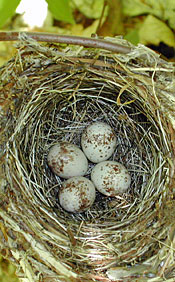 In a given year, over 50% of nests can contain young that were sired by a male other than the female's mate, and in some nests, 100% of the young are sired by an extra-pair male. Females mate with extra-pair males to gain the best possible genes for their offspring.

The biggest losers in this hidden mating game appear to be inexperienced, yearling males (which are often relegated to poor-quality territories) mated to older, experienced females. An older female in this situation likely arrived late on the breeding grounds, and had to take what she could get in terms of a mate.

Nevertheless, she can still surreptitiously breed with a nearby, 'high-quality' male on a good territory. Males aren't entirely clueless about their females' actions, though: those that have been heavily cuckolded tend to feed their nestlings less than males whose females didn't dally with the neighbors.

Black-throated blue warblers are ideal songbirds to study because their nests in the shrub layer are relatively easy to find and monitor, and their plumage allows one to readily determine the sex, and with practice, even the age of individuals (e.g., older birds have larger white wing patches than yearling males). 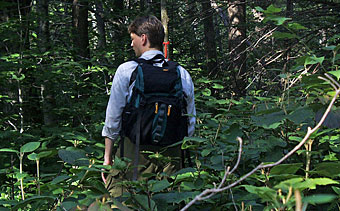 Black-throated Blues, like many forest warblers, are also relatively tame, and can be closely approached by a careful, quiet observer. The next time you find yourself in a deep, mountain forest, listen for this warbler's distinctive song and look for a singing male. Try to follow him for a few minutes. You might be fascinated by what you see.

Climate Change in Hubbard Brook Forest
Scientists are investigating how climate change affects migratory songbirds, such as the black-throated blue warbler and the ovenbird.