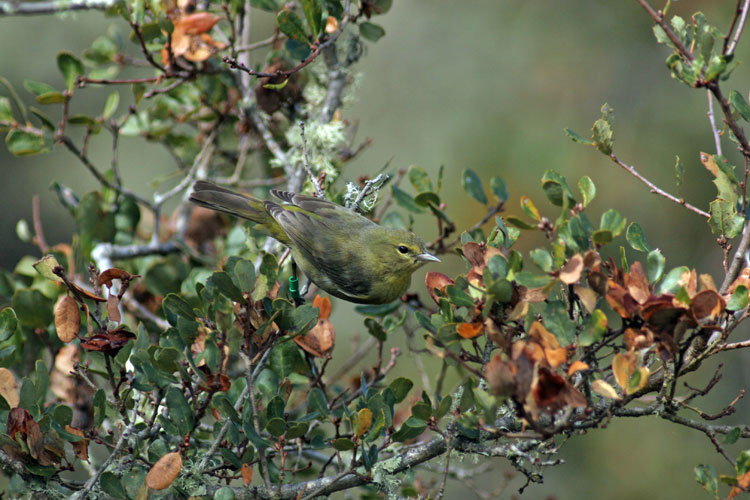 Most birders in North America are no doubt familiar with the orange-crowned warbler (Oreothlypis celata). The species breeds throughout the western U.S. and across the boreal forest from Alaska to Newfoundland, winters in much of Mexico and the southern U.S., and migrates through a broad swath of the intervening areas in spring and fall. The end result is that, south of the arctic treeline, you would be hard-pressed to find a region in North America where orange-crowned warblers haven't been spotted in one season or another.

Orange-crowned warblers are typically found in shrubby habitats, whether it be the bogs of Alaska or the chaparral of California, and make a living gleaning insects off leaves. Identification is not particularly easy. The species resembles the Tennessee warbler (O. peregrina) and, with generally drab and geographically variable plumage, lacks clearly identifiable field markings.

What's more, the feature that gives them their name—the orange crown—is barely perceptible unless one sees a male puffing up his crown in an aggressive display, or blows on the crown feathers while banding a male. 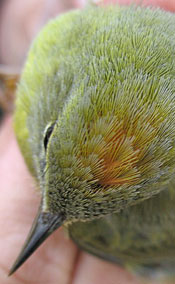 Even so, many birdwatchers would likely be perplexed by the curious variety of orange-crowned warbler that breeds on the Channel Islands, off the coast of southern California. Oreothlypis celata sordida, or the "dusky" orange-crowned warbler, probably used to breed in coastal oak woodlands throughout much of southern California. Now, except for a few places on the Palos Verdes Peninsula and on Point Loma, it is relegated to the islands because of intensive development on the nearby mainland.

Observant birders would discover this cryptic warbler breeding in oak woodlands and giant coreopsis (Coreopsis gigantea) thickets across the islands, sometimes in astonishingly high densities (more than 4 pairs per hectare!). They would also find that its plumage is darker green and heavily streaked underneath compared to mainland birds. 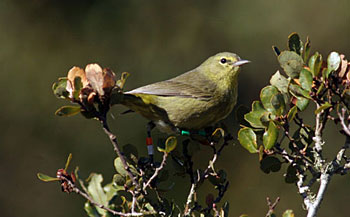 But, its plumage is not the only characteristic that makes this subspecies unique. Oreothlypis celata sordida also differs from mainland varieties for a host of other reasons.

Take migratory strategy. Most warblers that breed in North America exhibit strong migratory tendencies, taking advantage of the spring flush of insects in temperate zones while moving to southern locales during the relatively inhospitable winter months.

Orange-crowned warblers as a whole are no exception: boreal breeders relocate to the Gulf Coast of the United States and Mexico during the winter months and individuals breeding in the western U.S. migrate to Mexico.

That said, the migratory tendencies of O. celata at the southern tip of the species' breeding range are much less pronounced. We do not know exactly where individuals that breed on the Channel Islands go after their February-June breeding season, but most leave the islands to spend their "winters" (July-January) on the coast of southern California and northern Baja. 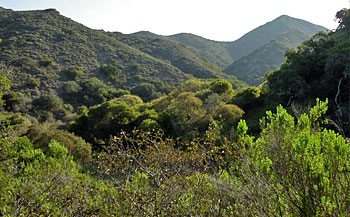 Breeding habitat of the orange-crowned warbler.

Of course, they can afford to: the climate of coastal California and Baja is relatively benign, so insects are available year-round. Why go far when food is nearby? The answer, it seems, is don't.

A reduced migratory tendency has its advantages. Migration is an energetically costly and potentially dangerous behavior. By avoiding lengthy journeys through unfamiliar terrain, V.c. sordida have a much higher probability of surviving from one breeding season to the next than highly migratory populations.

Probability of Living One Year

The downside, however, is that they do not experience the same surge in productivity during the breeding season. Orange-crowned warblers rely on insects like caterpillars to feed their young, so with the reduced peak in food abundance, O. c. sordida lays fewer eggs (2-4) than conspecifics that trek all the way to Alaska to breed in an environment flush with insects (5-7 eggs). 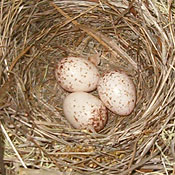 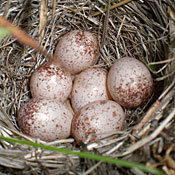 Orange-crowned warblers on the Channel Islands also suffer from a much less predictable food supply. The islands are generally dry and the amount of precipitation varies dramatically from year to year. In wet years, warblers can commence breeding as early as February, leaving them enough time to raise—or at least attempt to raise—2 broods over the course of the breeding season.

However, in dry years, they can delay breeding for months, and in exceptionally dry years, they may not breed at all. This tremendous flexibility in the timing of reproduction contrasts starkly with strongly migratory populations, which typically start breeding within days of females arriving on breeding areas.

Birders who visit the Channel Islands may also be struck by the curious vocal behavior of O. c. sordida. Orange-crowned warblers are known for belting out a high-pitched trill, but males on the Channel Islands have a much more variable, melodic song than is typical of the species (see spectrograms below).

They also sing much less frequently. Sure, males sing at the start of the breeding season, but once the nesting process is underway, they seem to prefer chipping as their primary mode of communication.

Another unique aspect of the island birds is their flexibility in nest placement. Warblers in the genus Oreothlypis almost always nest on the ground, and that is indeed the case for mainland subspecies of the orange-crowned warbler. But, here again, that does not hold true for O. c. sordida. 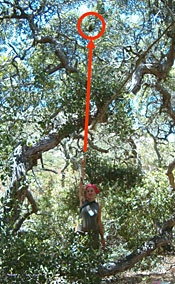 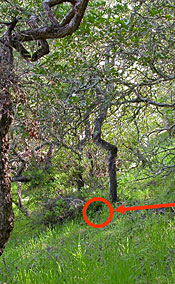 Females on the Channel Islands frequently nest off the ground, mostly in oak trees, lemonade berry (Rhus integrifolia) bushes, and giant coreopsis plants. The islands where off-ground nesting occurs are generally free from visually-oriented nest predators like jays, and these nests tend to have higher success than ones on the ground, which are more susceptible to snake and mammal predation.

In the short video clip above, a female orange-crowned warbler visits its nest in a shrub on Catalina Island. She feeds a nestling and then removes a fecal sac.

Interestingly, on the one island where jays are present—Santa Cruz, home of the endemic island scrub-jay—the vast majority of O. c. sordida nests are built on the ground. It seems like a sure bet that the predator community has something to do with that behavior, as the vegetation is similar to other islands and even on nearby Catalina, where no jays are present, females will nest on the ground if you trick them into thinking a jay is around.

Once the nests are built, the females usually have ample time to raise their young. They don't have to worry about molting and migrating as soon as the breeding season is over, and can instead focus on their reproductive activities, unfettered by the demands of preparing for a long migratory journey south.

If a predator finds a nest, they can build a new one. If their nest is lucky enough to fledge, they can feed their young for upwards of two months while they grow and develop the skills necessary to fly and find food on their own. Once all that is over, they can take their time to fly 20 ? 30 miles to the nearby mainland, where they can spend the winter and molt their plumage for the next breeding season.