An Island of Their Own

As soon as they step off the boat onto Santa Cruz Island, the largest of the eight California Channel Islands, a distinctive, metallic call greets visitors. This call belongs the island scrub-jay, a large, strikingly blue bird with a whitish-gray breast and a prominent black bill.

One can usually spot these inquisitive jays perched upon a large shrub, gazing imperiously over their territories. But these lordly birds reign over a small kingdom: the island scrub-jay lives only on Santa Cruz Island, which means it has the smallest range of any North American bird species.

Island scrub-jays belong to the taxonomic family Corvidae, which includes crows, ravens, magpies, and jays. Corvids are remarkable for their intelligence, memory, and curiosity. The scrub-jay group consists of 5 species that range from Central America to Washington state and from the Pacific Ocean to Florida. Their genus name, Aphelocoma, means "soft hair" and refers to scrub-jays' sleek appearance, compared to other corvids.

Genetic analyses indicate that the island scrub-jay diverged from its closest relative, the widespread western scrub-jay (A. californica), about 150,000 years ago. How did scrub-jays get to the Channel Islands? These islands were never connected to mainland California, and scrub-jays do not readily cross large bodies of water.

This hesitation to fly over open water is evident in the lack of scrub-jays on the other Channel Islands, including Santa Rosa, which has seemingly suitable habitat and is only 5 miles (8 kilometers) from Santa Cruz Island.

During the Pleistocene, sea level was lower and Santa Cruz, Anacapa, Santa Rosa, and San Miguel Islands merged to form one large island called Santarosae that was 2 to 5 miles (3 to 8 kilometers) from the mainland at its closet point. Scrub-jays probably crossed the narrower Santa Barbara Channel in the Pleistocene and lived on much of Santarosae.

As sea level rose to its present level, gene flow between island and mainland scrub-jays ceased and the northern islands became separated again. We don?t know when island scrub-jays became restricted to Santa Cruz. Scientists have found a subfossil bone of the island scrub-jay on Santa Rosa Island, indicating that it lived there thousands of years ago.

However, scientists did not describe this species until 1886, after human activity and tens of thousands of introduced sheep degraded vegetation on Santa Rosa. Thus, scrub-jays could have disappeared from Santa Rosa Island just in the past few centuries.

Even though island scrub-jays look superficially like their mainland relatives, they have a few readily apparent differences: they are brighter blue, larger, and have a proportionally burlier bill that allows them to be one of the top terrestrial predators on Santa Cruz. In fact, they eat just about anything, including insects, spiders, snakes, lizards, mice, and other birds' eggs and nestlings. We've even observed them attempting to catch adult orange-crowned warblers (Oreothlypis celata sordida)!

Island scrub-jays, like other Aphelocoma, also have a great fondness for acorns, which they need to survive over winter when animal prey is scarce. In the fall, Santa Cruz's oaks produce copious quantities of acorns. Island scrub-jays collect acorns greedily, sometimes stuffing their throats so full that the acorns bulge from their mouths.

They then fly off and use their big bill to bury, or cache, the acorns in hidden spots to eat later, sometimes months later. Scientists think caching is one reason why scrub-jays and other corvids are among the most intelligent of birds: they need a big brain to remember where to find the thousands of acorns they hid earlier. 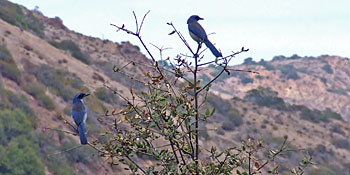 Island scrub-jays are monogamous and may stay with a mate for their entire lives. Each pair vigorously defends its territory of a few hectares in size and rarely leaves it. Unlike some Aphelocoma species, the island scrub-jay is not a cooperative breeder, meaning that pairs do not rely on other related jays to help them raise their young.

Both the male and the female help build nests three to 25 feet high in trees and shrubs. They use small oak branches that they break off trees (and they never use sticks that fall to the ground). These branches form the cup of the nest, which the parents line with grass and small roots. 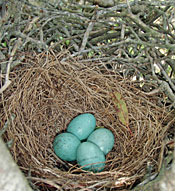 Females lay 3 to 5 eggs in a nest that they incubate for about 20 days. While the female sits on the eggs, the male spends his time hunting and defending the nest from snakes, hawks, foxes, and other island scrub-jays. The male is also responsible for bringing the female food so she can be with the eggs as long as possible each day. Our observations suggest that the more time parents spend near their nest, the higher their chances of defending against nest predators.

After the eggs hatch, both parents spend 23 days feeding, defending, and caring for their nestlings. This is a long nestling period, and our ongoing research indicates that only about one-third of island scrub-jay nests are successful in fledging young. However, if a jay can make it through the gauntlet of predators to live into their second year, it can live for more than 20 years!

We still have much to learn about the ecology and management of the island scrub-jay. This jay's tiny range and resulting small population size make it especially vulnerable to natural disasters such as a catastrophic fire, to disease such as West Nile Virus, and to habitat alteration due to climate change. Fortunately, the Channel Islands National Park and The Nature Conservancy jointly protect Santa Cruz Island. Check the Smithsonian Migratory Bird Center's website for regular updates about our research on this fascinating bird.