Hanging upside down on branches, stealing insects from the undersides of leaves, this acrobatic and gregarious bird is always a welcome sight. Though a common visitor to backyard feeders throughout the southeastern United States, we still have much to learn from this charismatic songbird.

Throughout the entire year, these gray birds with their distinctive blackcaps, white eye patches, and black bibs sing their four-note song (listen below) or call out their namesake chickadee-dee-dee call.

While Carolina chickadees live throughout the southeastern United States, even birdwatchers with keen eyes living at the northern edge of the Carolina's range are readily forgiven for mistaking them for their nearly identical cousin, the black-capped chickadee.

Visually, these birds appear nearly identical. The northerly black-capped chickadee can be identified (though not easily) by a larger body, longer tail, and a characteristic, and perhaps appropriate, 'hockey stick' pattern of white that is conspicuous on the closed wings.

The best way to distinguish between these species, however, is by song. The Carolina chickadees sing songs that are usually four notes long, with alternating high and low pitch (listen to the song below), while the black-capped chickadees sing a distinctive fee-bee or hey sweetie song. Personally, I prefer to think of the black-cappeds singing cheese-bur-ger.

That all said, if you're standing close the approximately 40-kilometer wide contact zone where these two species overlap, the birds pose an additional challenge. Carolina and black-capped chickadees hybridize extensively and, as a result, many of the birds within the hybrid zone fall somewhere between black-capped and Carolina chickadees visually. In addition, many are bilingual—they sing the songs of both species, and their songs may combine elements typical of each species. In other words, good luck!

So, how do we tell these birds apart if they look the same and sound the same? The answer, luckily, lies in their DNA. By analyzing these birds' genetic material, it turns out that although they hybridize readily, black-capped chickadees are not even the Carolina chickadee's closest relative! Black-cappeds are actually most closely related to their montane sister species, the mountain chickadee.

Black-capped and Carolina chickadees likely diverged during the early Pleistocene ice age (1.8 million - 10,000 years ago) and were reunited once global temperatures shifted and the ice sheets receded. In other words, when vast ice sheets covered much of North America, the wily Carolina chickadees took refuge in the warmer climates of the south and waited until conditions improved before venturing back northward.

But, if these two species have been separated for so long, why are they hybridizing now? To answer this question, we need to understand not only what happens during the breeding season, but also what goes on during the winter. Both black-capped and Carolina chickadees are non-migratory birds, meaning that, like most of us, they spend the winter in the same place they spend the summer.

At the end of the summer, they congregate in small flocks of two to eight birds to forage together for food and provide each other with protection from predators. However, within these flocks, there are firm rules. Like a wolf pack, chickadee flocks have strict dominance hierarchies that determine who eats when, who keeps watch, and, perhaps most importantly, who mates with whom.

The next time you watch chickadees at a bird feeder, see if you can determine who's dominant in the flock. (Hint: the dominant bird will fly in to the feeder and kick off a low-ranking bird. On the other hand, if a dominant bird is eating, low-ranking birds will either patiently wait nearby or fly in close and wait their turn).

For both black-capped and Carolina chickadees, the most dominant males mate with most dominant females. In March or April, the pair begins scouting out nest locations and selects one. Chickadees are secondary cavity nesters, which means that they nest in tree cavities originally created by other animals, such as woodpeckers.

Both males and females work furiously, excavating rotten wood from the cavity. Then the female builds the nest by laying down a deep, spongy layer of moss covered with a thick lining of hair from any sort of mammal she can find. They also lay down a second layer of fur, beneath which the female lays her eggs so no inquisitive predators find an easy meal. Once she has laid all her eggs (usually six to nine), the female will incubate them for about two weeks. During this time, she will occasionally ward off predators by imitating a snake (see video below. *note-there is no audio for the video).

What does all this have to do with hybridization? Well, it turns out that when it comes to chickadees, size doesn't matter after all. Despite their smaller stature, Carolina chickadees seem to be dominant over black-capped chickadees in flocks and, perhaps because of this, it seems females of both species prefer to associate with the Carolina chickadees. But the female's apparent preference for Carolina chickadees doesn't stop at finding a social partner.

While both black-capped and Carolina chickadees are socially monogamous (meaning that one female pairs with one male for the entire breeding season) and both parents help raise offspring, their DNA tells a different story. By examining the DNA of parents and offspring, it turns out that, like most songbirds, chickadees may be socially monogamous, but they're certainly sexually promiscuous. 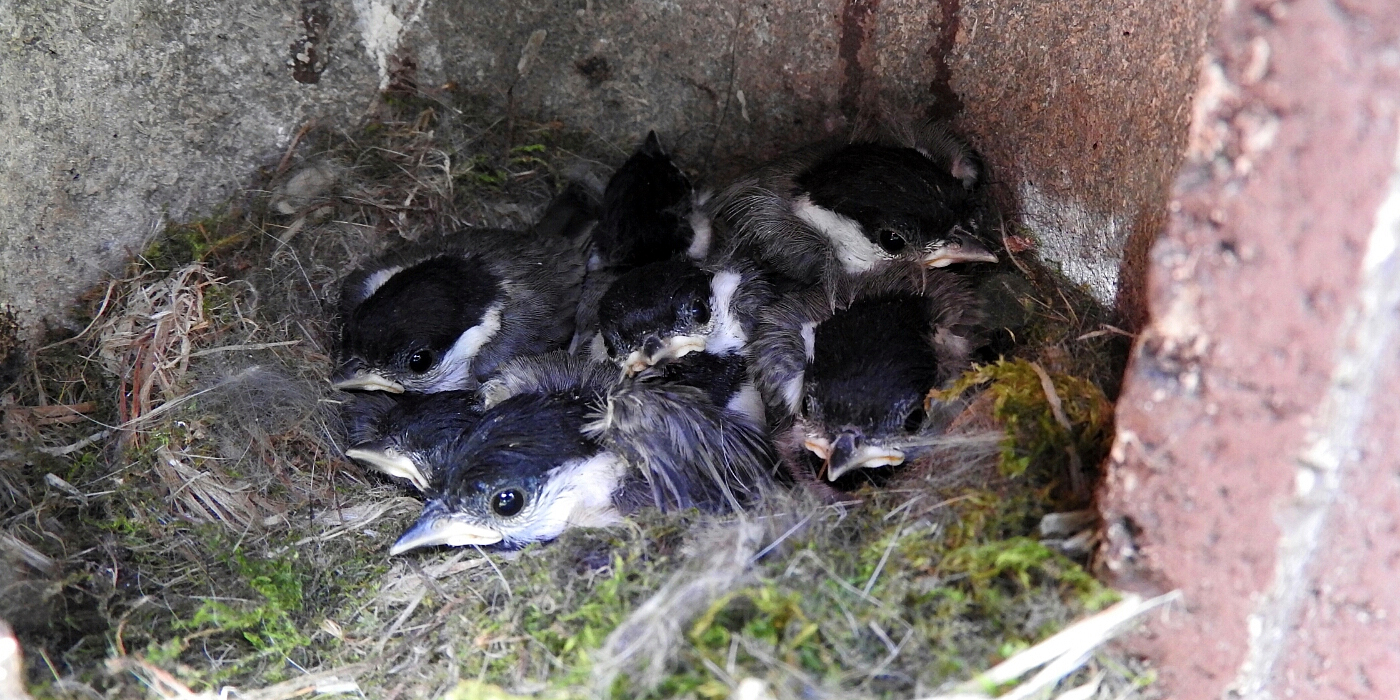 In fact, more than half the nests in a hybridizing population of chickadees in Pennsylvania contained offspring fathered by a different male, whom we refer to as an extra-pair male. Interestingly, when females of both species paired with Carolina-like males, they were less likely to 'stray' and, in those cases where females did mate with an extra-pair male, they chose Carolina-like males as their new beaus.

The fascinating thing about this is that it may give us some insight into why the Carolina chickadee range appears to be expanding northward, encroaching on the black-capped range. It may be that the Carolina range is growing because no female can resist the charms of this diminutive but frisky backyard bird.