Smithsonian Migratory Bird Center scientists have been banding migrating birds at some of the first resting and refueling habitats for northward migrants that have flown hundreds of miles non-stop across the Gulf of Mexico, including The Nature Conservancy's Clive Runnells Family Mad Island Marsh Preserve in Matagorda County, Texas. In the course of conducting this research, they hope to increase awareness of the northern coast of the Gulf of Mexico's importance to bird populations and of the phenomenon of bird migration, ecology and conservation.

To date, the team has banded 1200 birds of 71 different species. 227 different bird species have been observed on the property this year. The following is an ongoing, first-person account of their research in the field.

Late April to early May is peak migration time here on the Texas coast, and while we can never quite predict the exact days the birds will arrive, we can be confident that large pulses of birds will pass through during these weeks. Up until about mid-April, migration had been a bit slow here at Mad Island, with south winds and uneventful weather leading many birds to bypass the immediate coastal areas.

Despite this slow start, however, peak migration arrived as predicted and did not fail to deliver. The most visible sign that the peak had arrived was marked by a large arrival of colorful, medium-sized birds. One morning, we arrived at the site and found that it was thick with orioles, grosbeaks and tanagers.

Both Baltimore and orchard orioles were everywhere, and rose-breasted Grosbeaks were being caught on nearly every net run. Flocks made up of only male indigo buntings were hopping in our net lanes, and the first singing painted buntings arrived back on their territories on the preserve.

Each day brought newly arriving species, including some oddities, such as a chuck-will's-widow. This incredible nocturnal bird is the largest of the North American nightjars and is only the third individual banded in the site's six-year history.

One of the hallmarks of peak migration is the arrival of large flocks of a single species. This year we had several days of noteworthy abundance. For example, one afternoon following a slow morning, we suddenly began to see gaudy adult male painted buntings in our nets. We proceeded to band almost 30 males in a couple of hours, close to our yearly average in one afternoon.

The next day, the buntings were gone, probably having departed the previous evening. Similarly, we opened nets one morning and found that droves of common yellowthroats had arrived. Before the day's end we had banded nearly 80 of these small warblers and were forced to run a limited set of nets, so we didn't catch more than we could handle.

During the past week or so, we have begun to see the arrival of late-season birds, such as bay-breasted warbler and the various empidonax flycatchers, a sign that the peak is beginning to taper off. Overall abundance is dropping, but these final days of our season can bring interesting and unpredictable birds to the site. We look forward to seeing what the winds will bring.

Identifying Critical Stopover Habitat Around the Gulf of Mexico

“This is the time of year when the Texas coast really starts to shine.”

A couple of weeks ago, I got to get out of my office at the Migratory Bird Center in Washington, D.C., to band birds on the coast of the Gulf of Mexico. On my way down, I checked the BirdCast migration forecast for the Gulf Coast, which read: "The next frontal boundary arrives on Monday night and Tuesday, offering the best chance for western Gulf Coast fallouts and concentrations on Tuesday, in particular.”

I would be there on Tuesday, so that sounded good! Spring migration is my favorite season, when migratory birds make their spectacular journeys and return up north. Our collaborator from the Cornell Lab of Ornithology, Andrew Farnsworth, and his colleagues, Benjamin Van Doren at the Edward Grey Institute and Kyle Horton at the University of Oklahoma, have been analyzing big data — weather surveillance radar and eBird data, to be specific — to make regional migration forecasts, or “birdcasts,” in real time. 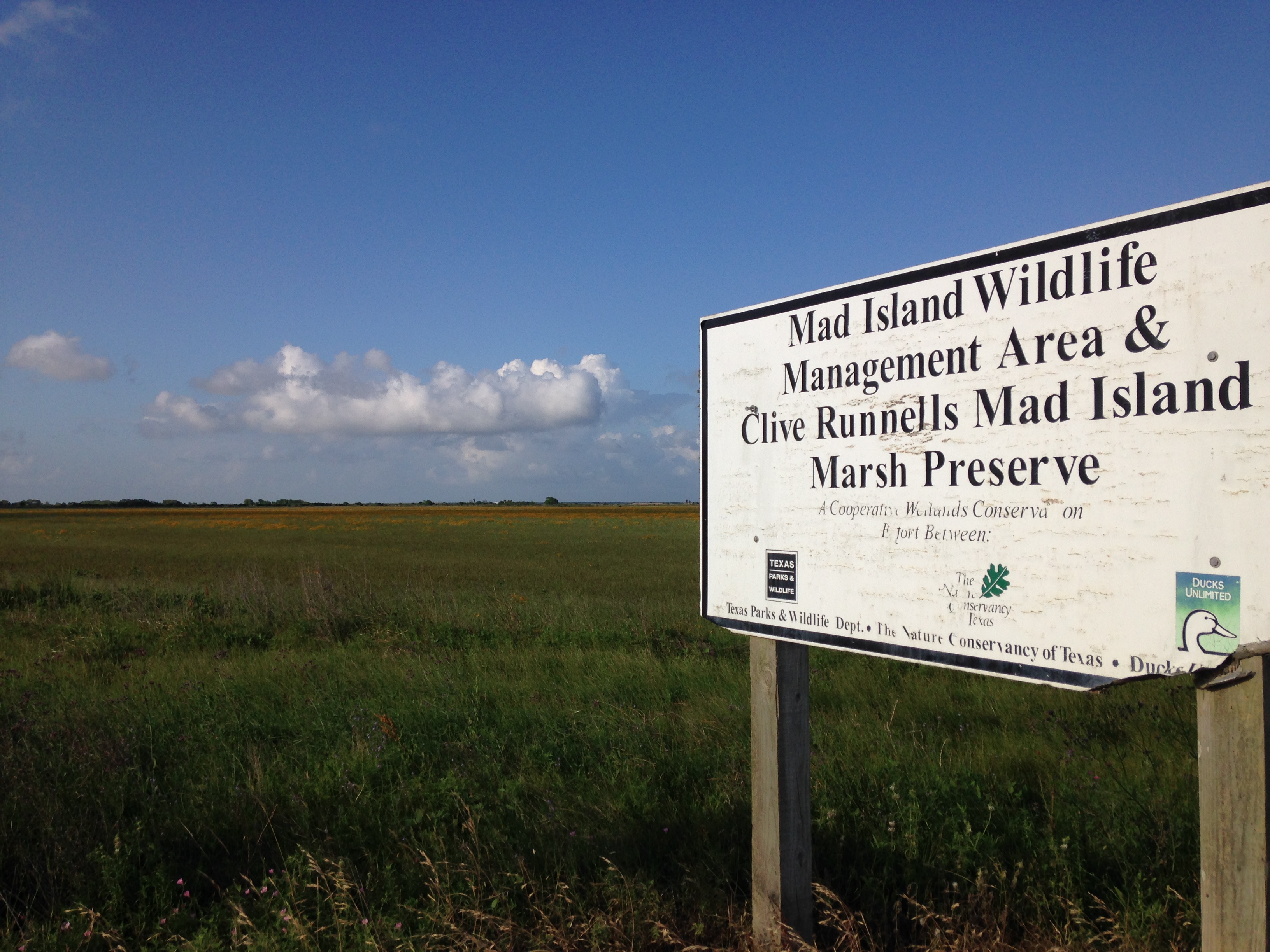 The day that follows a weather front is when we catch the most migrant birds at the mid-Texas coastal banding station. Many birds arrive across the Gulf. If they encounter unfavorable north winds or weather, they often stop in the first forested coastal habitat. That’s us! Unfortunately, it’s usually not safe for us to open nets when there are strong north winds, conditions best for migrant birds to stop. The nocturnal migrants do not often leave the night after a storm, so our site is busiest the morning after a coastal storm front.

Tuesday was our biggest day yet! We banded about 75 individuals of 25 different species. On my net run, I caught a glowing tomato-red scarlet tanager, the red contrasting with the glossy black wings. 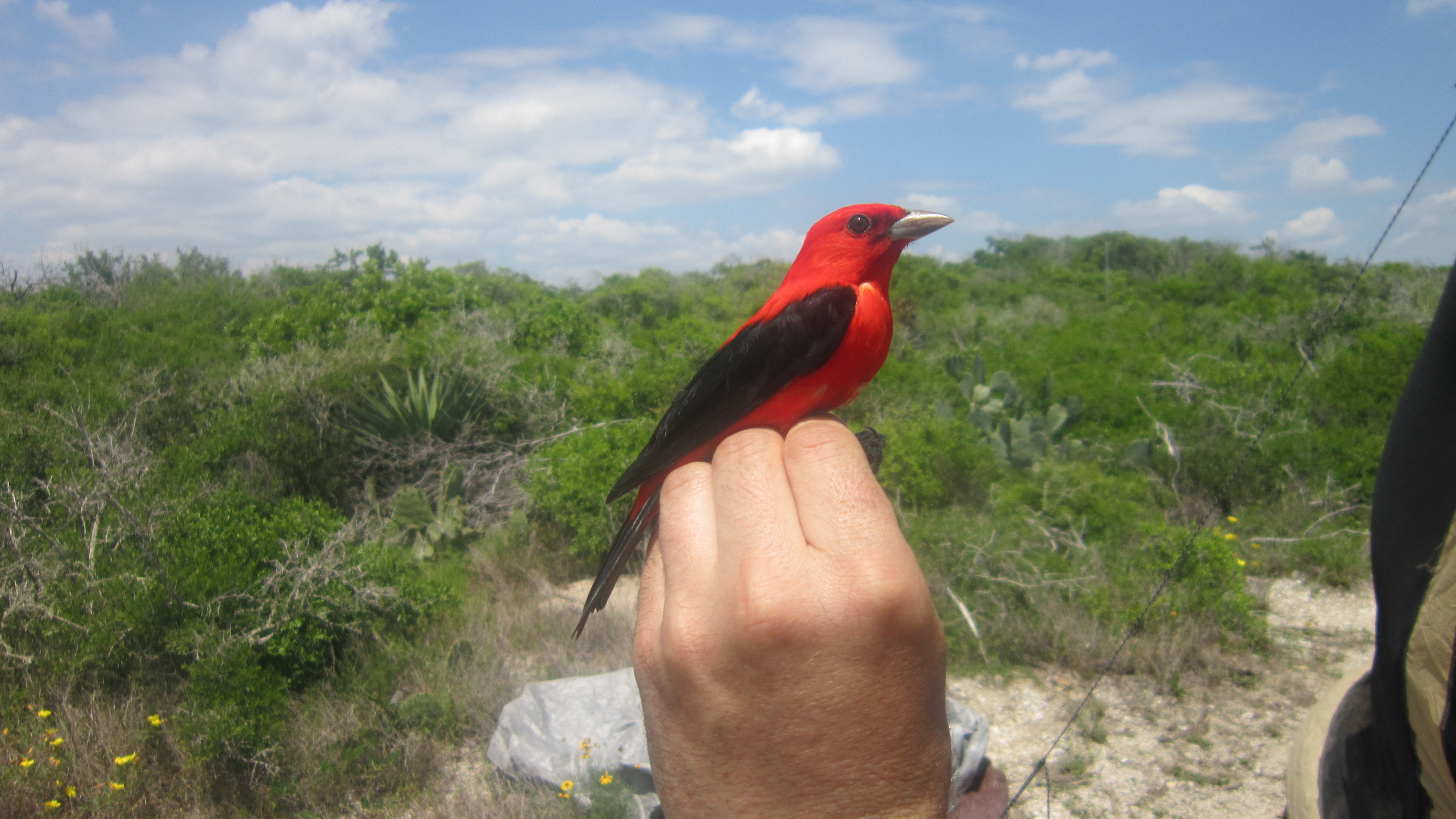 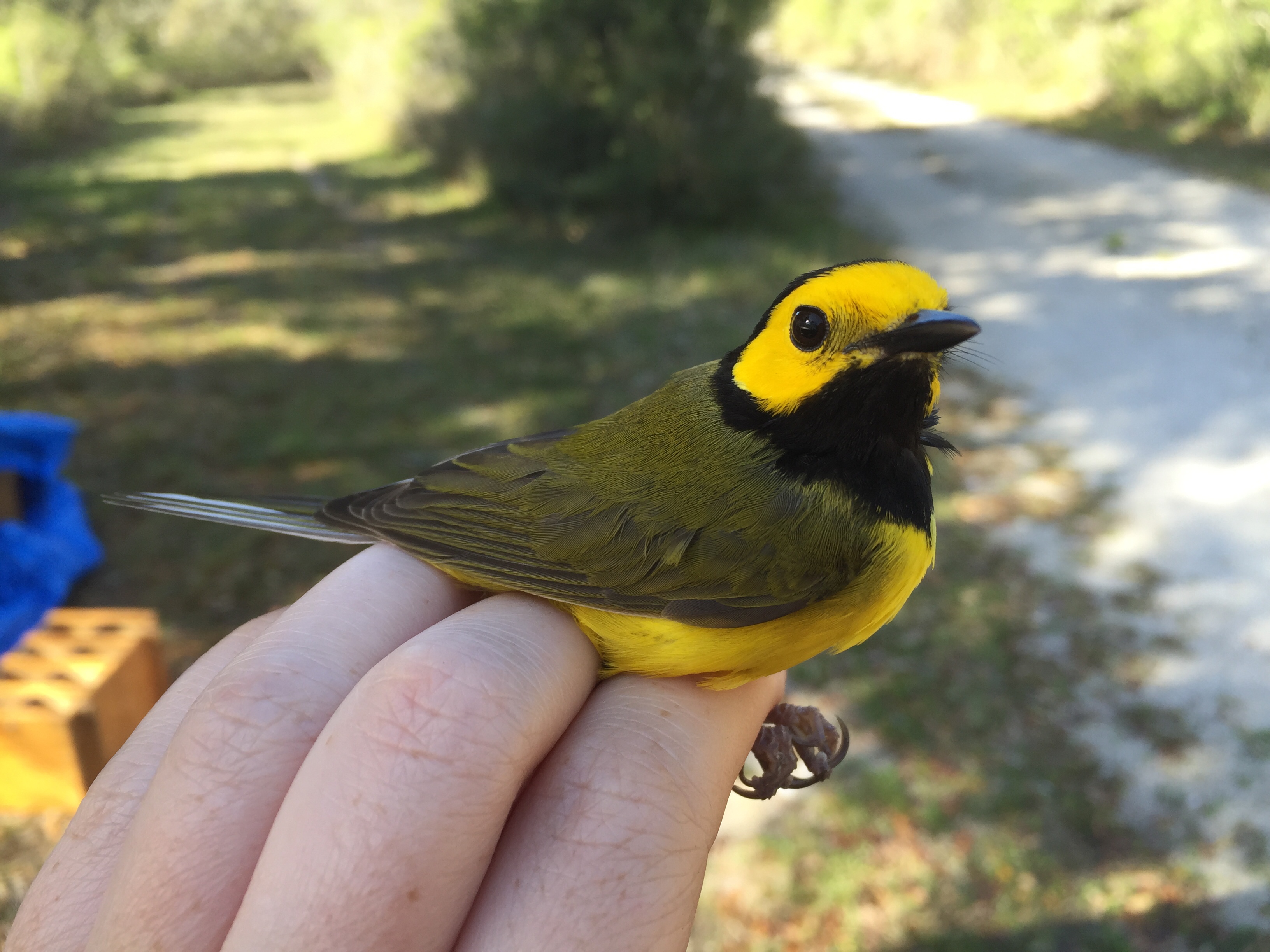 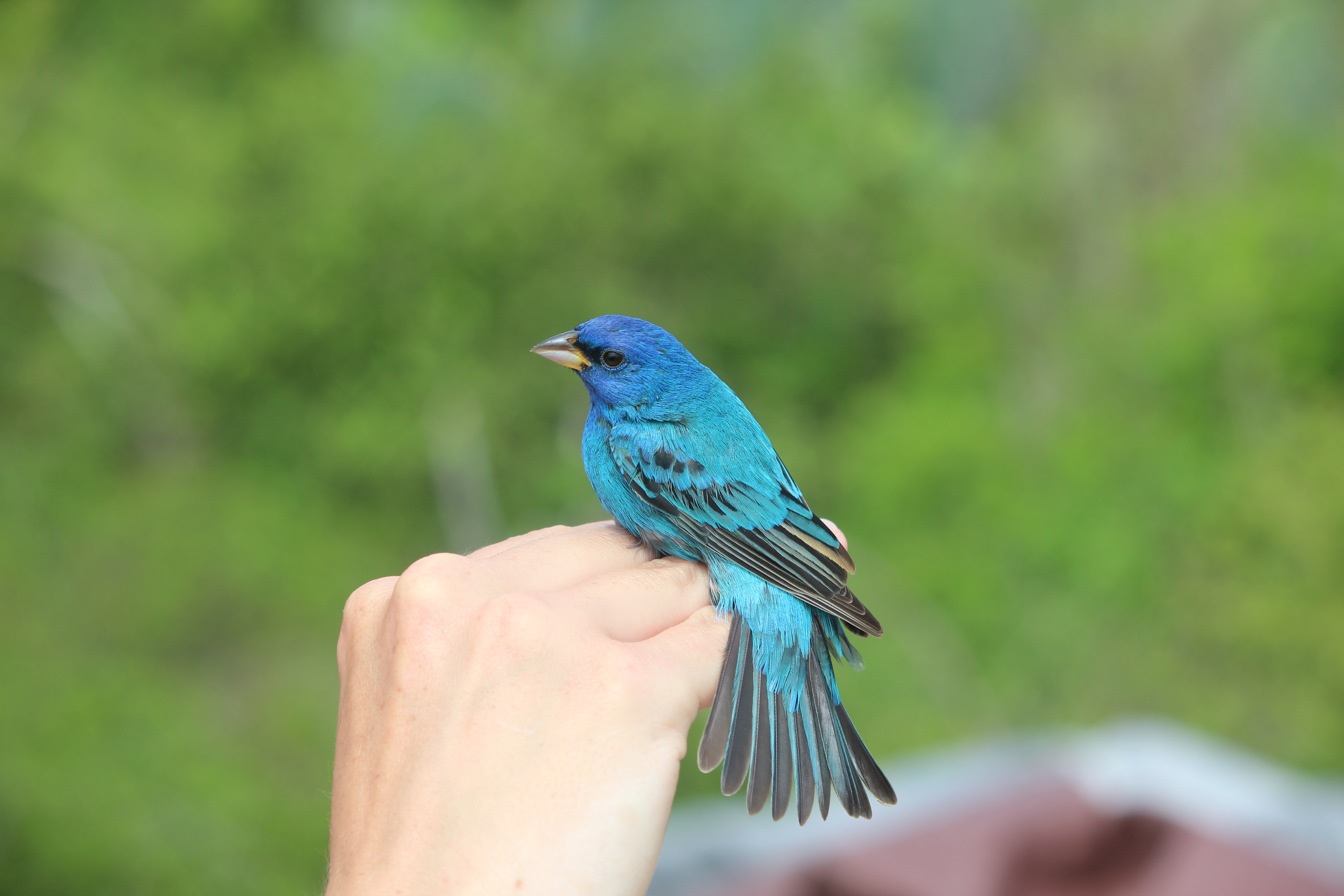 It's amazing to think that these bright little animals just flew 15-plus hours non-stop across the open waters of the Gulf of Mexico! 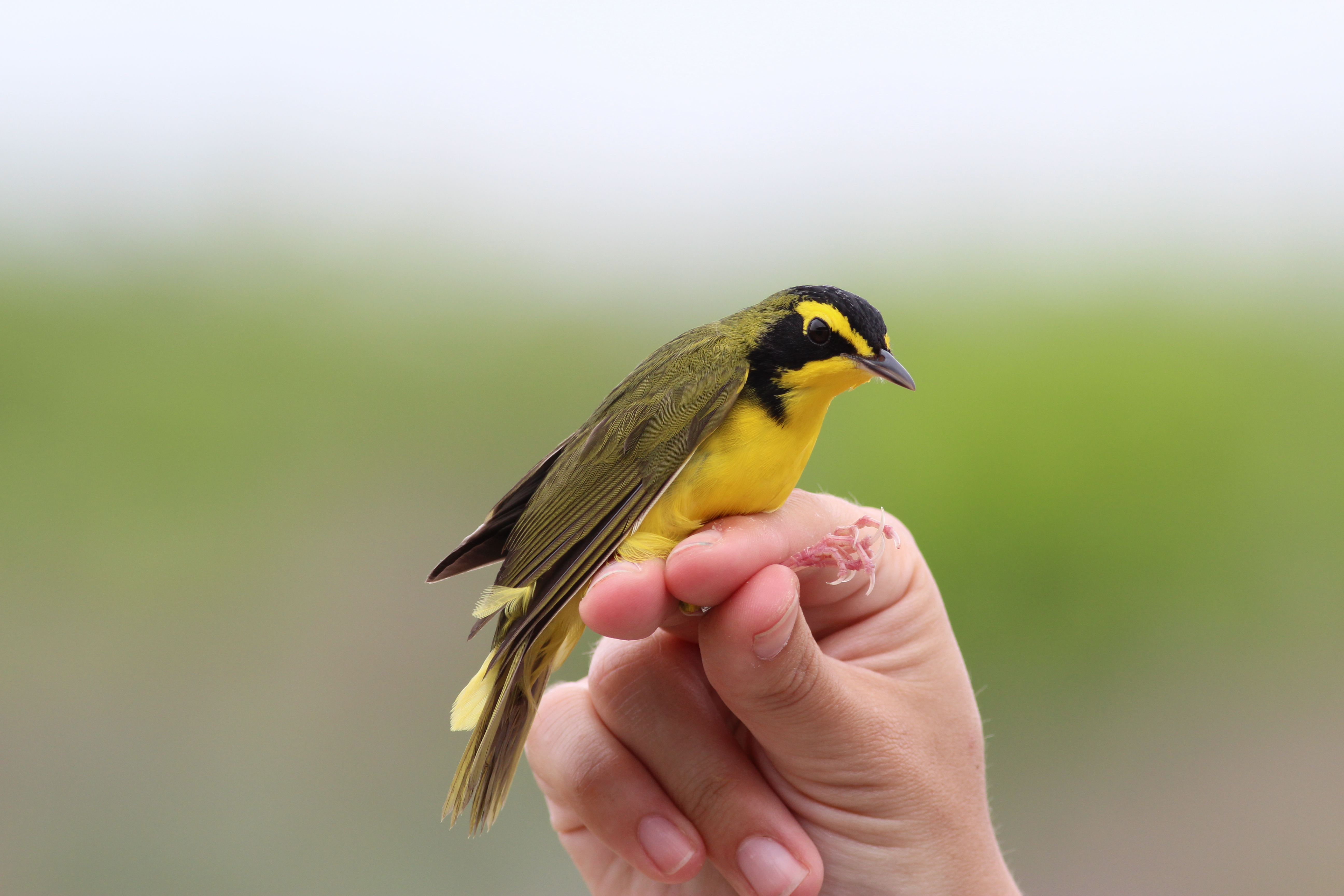 We catch the birds in nets, place a unique band on one leg, take some measurements, keep a feather for later analysis and then release them to continue their journey north. Good luck, guys!

Most of the information gathered about migrant passage and habitat use has come from single sites. This on-the-ground information about migration is invaluable and not easy to collect. Still, we need Gulf-wide information about the distributions of migrants to be able to identify key stopover habitat and airspace corridors necessary to conserve migrant birds moving through this critical region. For example, see Kyle Horton’s weekly maps of the mean intensity and direction of bird movement through the airspace around the Gulf of Mexico as presented by BirdCast:

We usually band more birds when more are passing over. So, where are they? April has been slow. Plus, we are catching bird species now that we would usually catch two weeks earlier. I was talking with Mariamar Gutierrez, who is running a banding station near Apalachicola Florida for the Gerson lab at the University of Massachusetts Amherst, and she said the same thing. They also are not catching their usual numbers of migrants and have entirely missed many of the early species, including prothonotary and hooded warblers. Why? Should we be worried? It is hard to say for sure, but probably not. As the BirdCast forecasts are showing, most migrants are likely riding the favorable south winds and skipping the coast right now. People are also reporting to eBird that they are seeing these species farther north. Still, it looks like a late year for spring migration.

Most annual mortality occurs during these migratory journeys, and the majority of our migratory bird species are declining. So, now is the time to draw syntheses from all available data sources to understand the habitats and threats that birds encounter both in the air and on the ground during migration.

With support from the National Fish and Wildlife Foundation's Gulf Coast Conservation Grants Program, in partnership with Southern Company, we are working together to map and link stopover and airspace habitat around the entire Gulf Coast, from the Florida Keys to Brownsville, Texas. Together —with Andrew Farnsworth’s group at Cornell Lab of Ornithology, his collaborators at Oxford and the University of Oklahoma, and Jeff Buler’s lab at the University of Delaware —we are mapping the Gulf-wide distributions of migrants in airspace and stopover habitat. With weather radar, we can take a comprehensive look at how winds and weather influence where birds are on the ground and in the air — and link the two together.

Halfway Through the Field Season

As the migration season gets busier at Mad Island, our education program has also been picking up. In an effort to increase outreach in the area, we have invited about 200 students from Van Vleck, Matagorda, El Maton and Houston to participate in our programs so far this year. Students from grades 5 to 12 have had the chance to see bird banding up close at Mad Island and the Matagorda County Birding Nature Center. We also reached out to another 130 people at the Coleto Creek Park Nature Fest in Victoria, Texas. 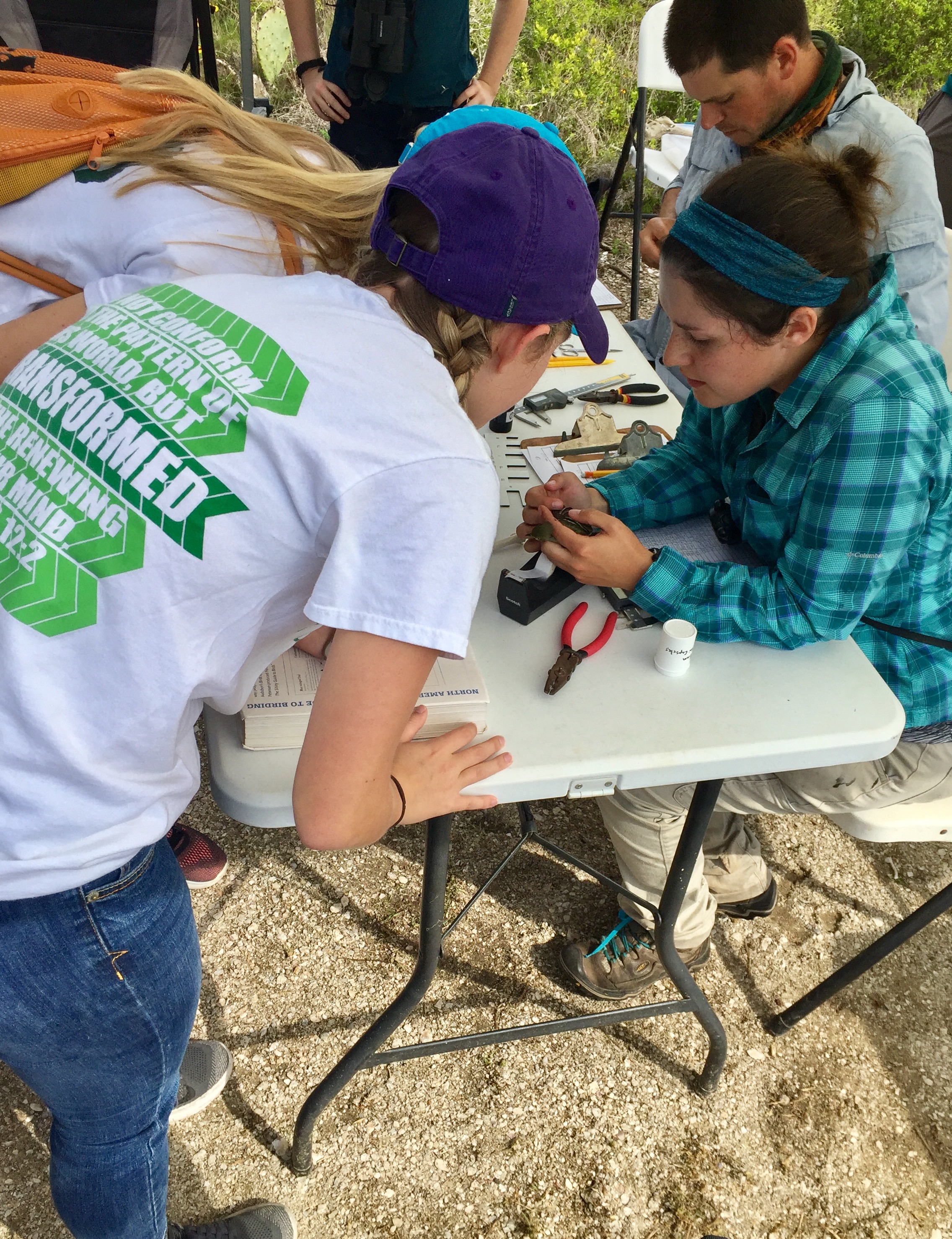 By engaging local students, we hope to teach them about the importance of habitat on the Gulf Coast and the phenomenon of bird migration. We give school groups the chance to experience this, by demonstrating the banding of migratory birds and taking a look at other aspects of bird ecology.

A typical day at Mad Island includes both bird banding and a seine net activity, where we catch juvenile fish, crabs and shrimp in the Intracoastal Canal that serves as a nursery habitat for fish hatched in the Gulf. This seine net activity brings our message back to migratory ecology, as the fish we catch are an important food source for many migratory and resident water birds.

Maybe even more important, kids get the opportunity to connect closely with nature by touching marine life, seeing birds up close and handling some of our collection of bird bones, skulls and feathers collected at Mad Island. Throughout the day, students learn about field biology through lessons that bring together parts of ornithology, biology and ecology on the Gulf Coast. As we’re halfway through our season, school groups that visit are getting closer to witnessing peak migration.

Our most recent group of high schoolers was able to observe our biggest and most diverse day yet, with around 75 birds, including indigo buntings, orchard orioles, ruby-throated humming birds and several species of warblers and vireos.

We look forward to what we can show visiting school groups for the rest of the season!

The 2017 Mad Island field season is underway at the Clive Runnells Family Mad Island Marsh Preserve! After a day of setting up and organizing the gear, we first opened up the nets on March 13.

We were not surprised to see that a white-eyed vireo was our first bird of the season. White-eyed vireos are present year-round in the coastal habitat where the nets are located, and the species also migrates in fairly large numbers. In fact, just that a few days later, after a slow early morning, a wave of migrating white-eyes started arriving. By the day's end, we had banded more than 50 new individuals of the species.

Warblers have been a bit slow to arrive so far, but we have seen a trickle of early season species, such as the Louisiana waterthrush, northern parula and hooded warbler. We have also captured single individuals of worm-eating and black-and-white warblers, with many more yet to come!

As we await the arrival of some migrants, we are also seeing other species depart. Since arriving, we have seen the departure of the wintering sandhill cranes on the refuge. Many of the ducks that winter here are also moving out. This year, the wintering geese left before we arrived. Raptors, such as the red-tailed hawk, northern harrier, and American kestrel have been decreasing in numbers, as they begin to move north.

An unexpected highlight of 2017 has been the presence of at least two aplomado falcons on the refuge. These birds likely originate from reintroduction efforts, which are taking place in the region.

As I write this, there is some promising weather for the next few days, and we expect some new arrivals. Stay tuned for more updates throughout the season.