Since 1948, birds have been counted in spring and summer in a study plot in Rock Creek Park, a large forested area in Washington, D.C.

The purpose of the census is to monitor long-term changes of the bird population.

Note* In the charts below, the y-axis labels are territories in 100 acres. The plot itself is only 65 acres but by converting to 100 acres, the plot can be compared with other plots. Similar species are grouped together to aid in comparisons.

5 species of woodpeckers are found in the study plot: downy, hairy, flicker, pileated, and red-bellied.

Woodpecker numbers appear to be fairly stable but note that as the forest has gotten more mature (about 80 years old when the survey started), the larger woodpeckers (pileated, red-bellied, hairy) have gotten more common. Pileated woodpeckers, the largest species, were not found during the 40s and 50s.

Most of these cavity nesters likely spend the year in the study plot, except perhaps the flicker.

The eastern wood-pewee, acadian flycatcher, eastern phoebe, and great crested flycatcher all breed in the plot.

Phoebes are fairly common in Rock Creek Park but have very specific nesting requirements, often on a bridge or building (but not in a tree). There is only 1 bridge in the plot.

The most common nesters in the plot at the beginning of the survey, the migratory red-eyed and yellow-throated vireos have declined precipitously.

Yellow-throated vireos appear to have recolonized the plot after disappearing in the 1970s.

Blue jays and American crows occasionally nest in the plot.

Never very common, they may have been affected in the 21st century by the spread of West Nile Virus. Corvids are particularly susceptible to the disease.

The resident Carolina chickadee, tufted titmouse, and white-breasted nuthatch all nest in cavities in trees.

Like other non-migratory birds in the park, their numbers appear to be fairly stable.

The migratory wood thrush, veery, and American robin all occur in the study plot, at one time or another.

These colorful migratory songbirds have all died out in the plot and maybe from Rock Creek Park as well.

Ovenbirds and Louisiana waterthrushes nest on or near the ground.

The migratory ovenbird has declined alarmingly while the Louisiana waterthrush has been fairly stable. Waterthrushes nest along streams and there is one small stream in the plot.

Like other Neotropical migratory songbirds, the scarlet tanager has declined in numbers. Towhees and cardinals, which favor shrubby edges, occur in low numbers in the forested plot. Cowbirds, which parasitize songbird nests, are not particularly common in the plot.

Since 1948, birds have been counted in winter in a 65 acre study plot in Rock Creek Park, a large forested area in Washington, D.C. The deciduous upland forest habitat has harbored 41 different kinds of birds.

However, only 5 kinds of birds have been found in every year: Carolina chickadee, tufted titmouse, white-breasted nuthatch, downy woodpecker, and brown creeper. These birds often occur together in small flocks.

The most common birds are the chickadee and the titmouse. In the chart below, you can see that their numbers fluctuate quite a bit from year to year. Year is the x-axis and count is on the y-axis. The nuthatch, woodpecker, and creeper numbers have been fairly stable.

It can be difficult to spot bird population changes over the short-term so long-term surveys like this one, and the Breeding Bird Census, help us to monitor the state of birds.

This census was restarted in the winter of 2010 after having last been surveyed in 1979.

As can be seen in the picture below, the study plot is a deciduous forest on a slope heading toward Rock Creek. The upper section is dominated by oak trees while the lower section favors tuliptrees.

Several ravines cut through the forest but only one has permanent water. The understory is comprised of saplings and a few shrubs. 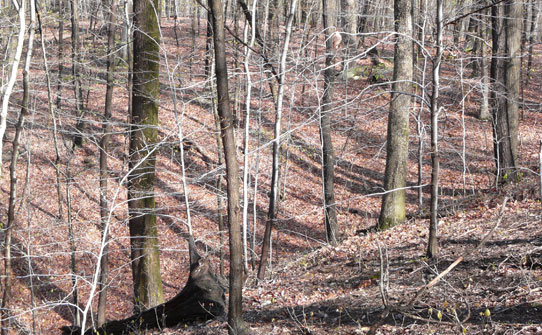 Wintering birds subsist on a diet of nuts and seeds provided by the trees as well as overwintering insects and their eggs. There is little fruit in the plot available.

The forest area was likely cut during the Civil War (1860s) and continues to regrow. When the study plot was first set up in 1948 there were scattered Virginia pines but these have died out as hardwoods have taken over.

Young beech trees, with their smooth white trunks, are quite visible in the photo and when they mature, will likely be the final stage of the forest's succession.

Deer have become more common in the park since 2000 and their browsing on low vegetation has opened up the forest understory.

Exotic shrubs from Asia, such as barberry and doublefile viburnum (Viburnum plicatum), have taken root in some areas of the plot and threaten to spread widely and displace native plants. Their spread may be speeded up by birds dispersing their winter fruit.