The widespread American robin is one of our most familiar birds and its arrival in spring is eagerly anticipated. The red breast makes it instantly recognizable although early European settlers to North America confused it with the European robin, another bird with a red breast, but smaller and unrelated to our robin.

They are found all across North America, from Alaska to Newfoundland and from Florida to California.

Robins are not particularly common in natural habitats, such as grasslands and forests, but are especially abundant near human dwellings, primarily during the nesting season.

Their ability to exploit a food resource found in the ubiquitous surburban lawns may account for their apparent fondness for humans.

Robins love the short, manicured lawns that are so prevalent in urban and suburban areas. Here they forage on a favorite food, earthworms. A short run across the turf and then a brief wait, if a worm is detected, then there is a quick pounce and capture. 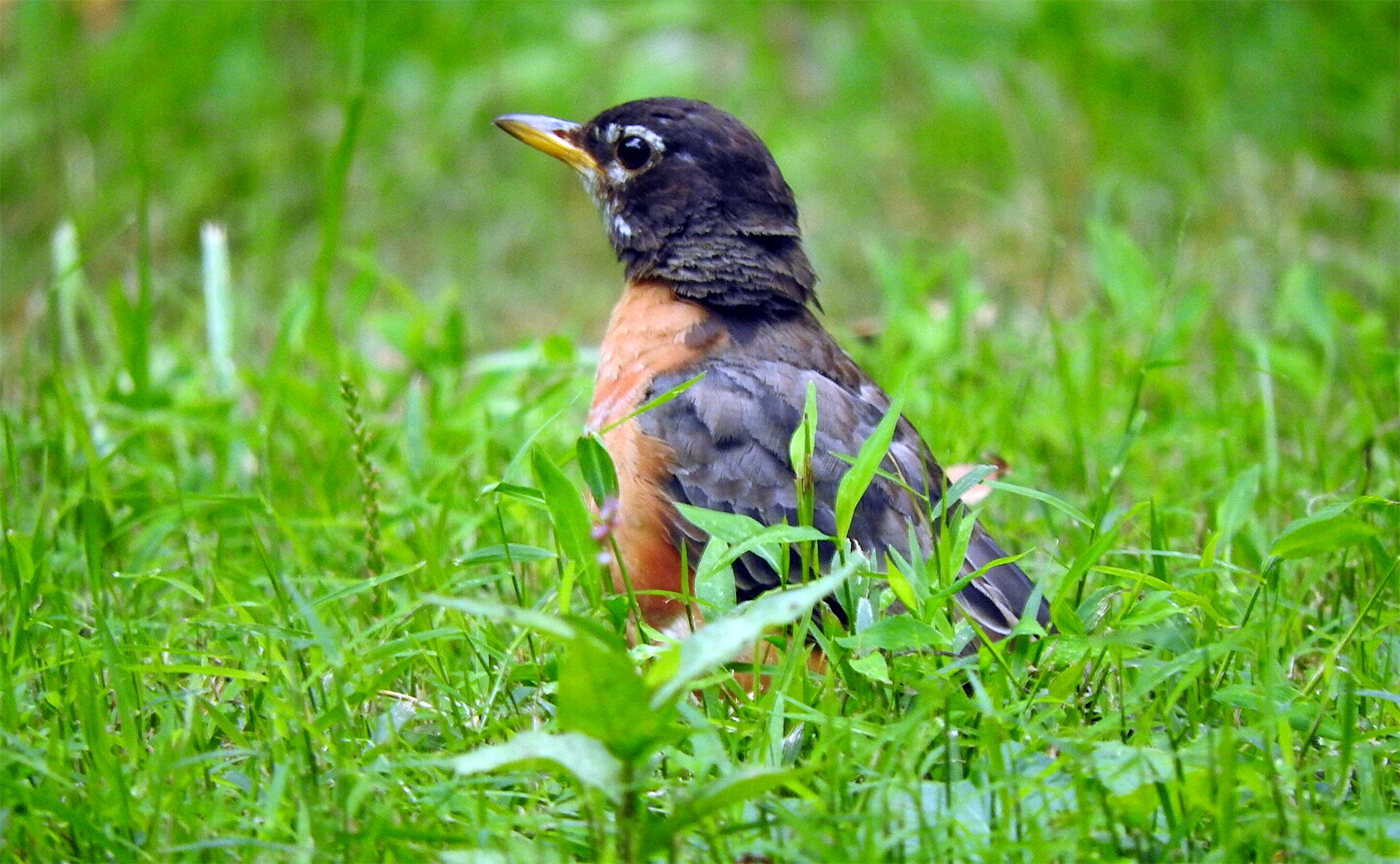 If not, the robin quicky runs to another promising spot on the green expanse and waits anew.

The plentiful worm harvest in lawns provides not just a sumptious repast for the adult robins, but necessary protein for their nestlings.

Robins, unlike most migratory birds, will nest several times during spring and summer, there is lots of wriggling food.

But life in suburbia is not without its costs, scientists have been studying suburban birds in their Neighborhood Nestwatch project and found hidden perils.

Lead, leftover from the days of leaded gasoline and paint, contaminates suburban soil, and soil often adheres to the slimy skin of worms.

Robins, both adults and nestlings, have lead levels in their blood that are roughly twice as high as robins from rural areas and the amount of lead in their blood suggest that some symptoms of lead poisoning are being manifested.

A more recent problem for robins is the spread of mosquito-born West Nile virus, a disease that can kill birds.

Researchers found that robins appear to be a favored target of mosquitoes and many have the antibodies to the virus in their blood, this means that they were infected but have survived.

Although many robins have succumbed to lead poisoning, viral infections, and the many other hazards of suburban life, such as predatory cats, flying into windows, and so forth, robin populations as a whole, monitored across North America for the last 40 years, have slowly increased.

The ability of the robin to adapt its lifestyle to match ours has allowed it to thrive, whereas many other migratory bird populations have declined.