Local citizen scientists working with the Changing Landscapes Initiative and Virginia Working Landscapes, both programs of the Smithsonian Conservation Biology Institute (SCBI), discovered a rare orchid that is nearly extinct in the commonwealth of Virginia. The purple fringeless orchid (Platanthera peramoena) is estimated to have fewer than 1,000 individual plants left in the state. Patty Lane of Rappahannock County and Kate Heneberry of Warren County found four individual purple fringeless orchids in bloom while conducting a routine orchid survey on a private farm just south of Sperryville, Virginia, July 24.

“I was so elated to find this huge purple orchid, I wanted to do cartwheels in the marsh,” Lane said.

Lane and Heneberry had finished their mid-July survey and were leaving their site when they noticed a purple flower in a pasture. After investigating, they identified the plant as a rare orchid; their rare find was confirmed by experts at Shenandoah National Park.

“I knew when it caught my eye that it was something I had never seen before,” Heneberry said. “It was totally exciting to identify it as an orchid—and then to learn it was rare!”

Citizen scientists are conducting orchid surveys with the Changing Landscapes Initiative and Virginia Working Landscapes as part of a pilot study in collaboration with the North American Orchid Conservation Center, which includes scientists from the Smithsonian Environmental Research Center. Led by Iara Lacher, head of the Changing Landscapes Initiative, these three Smithsonian programs are exploring the potential for orchid species diversity and abundance to serve as an indicator of forest health.

“Findings like this illustrate the importance of field work in conservation,” Lacher said. “We need to know where species are and how they are faring in order to understand how human activity shapes their future. Furthermore, finding a rare species garners interest for our greater work—the conservation of species and ecosystems is important for the health of both people and wildlife.”

The 20 citizen scientists who volunteered to assist with the orchid surveys underwent training to help them identify some of the 64 species of orchid native to Virginia, 34 of which are considered imperiled or vulnerable due to their rarity.

“It’s the first of these rare orchids we’ve found through our surveys, so it’s a big moment for our new project and for our volunteers” said Joe Guthrie, who was the field survey coordinator of the orchid project and is the research coordinator for Virginia Working Landscapes.

Purple fringeless orchids are native to the southeastern and mid-Atlantic region of the United States. Their flowers are pink or purple and they grow in a range of habitats but need wet soil. The orchids Lane and Heneberry found were growing in a wetland. Purple fringeless orchids are declining throughout their range—where wetlands have disappeared—and are endangered in several states where they are native.

The Changing Landscapes Initiative produces scientifically rigorous, human-centric and relevant information for community leaders planning for the rapidly changing landscape of northwestern Virginia. Virginia Working Landscapes is a program of SCBI that promotes the conservation of native biodiversity and sustainable land-use through research, education and community engagement. It partners with a network of NGOs, agencies, regional landowners and citizen scientists. The North American Orchid Conservation Center was established by the Smithsonian and the U.S. Botanic Garden to assure the survival of native orchids in the U.S. and Canada.

Photo credit: This photo is not owned by the Smithsonian's National Zoo and Conservation Biology Institute. Use of this photo requires photo credit to October Greenfield. 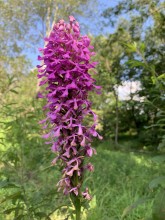 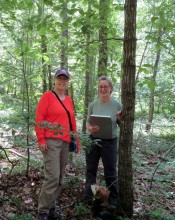