Cheetah Conservation Station keepers at the Smithsonian’s National Zoo are celebrating the birth of a critically endangered Dama gazelle. The male calf was born in an off-exhibit enclosure the evening of Sept. 7 to 8-year-old mother Zafirah and 4-year-old father Edem. Keepers continue to closely monitor the calf, which has been observed nursing regularly, exploring his environment and behaving normally. He is also steadily gaining weight, growing from 12 pounds at 2 days old to 15 pounds at 5 days old. Animal care staff are allowing the calf to bond with mom, as well as 1-year-old female, Asha, 9-year-old female, Fahima, and his 11-year-old grandmother, Adara, in an off-exhibit enclosure. He will make his public debut by mid-to-late October, weather permitting. This is the third calf for Zafirah and the fourth for Edem.

Edem arrived in July 2016 from the Zoo's Smithsonian Conservation Biology Institute (SCBI) in Front Royal, Virginia, following a breeding recommendation from the Association of Zoos and Aquariums’ Species Survival Plan (SSP). The SSP scientists determine which animals to breed by considering their genetic makeup, nutritional and social needs, temperament and overall health. Edem returned to SCBI in summer 2018 to rejoin its breeding program. Visitors can see Omari, a 1-year-old male Dama gazelle, at the Cheetah Conservation Station. The Zoo will provide updates on the calf on Facebook, Instagram and Twitter.

Native to Chad, Mali and Niger, Dama gazelles are listed as critically endangered by the International Union for Conservation of Nature. Less than 500 Dama gazelles remain in the wild due to habitat loss from human and livestock expansion, hunting and drought. SCBI conducts veterinary and reproductive research in order to maintain Dama gazelle populations. 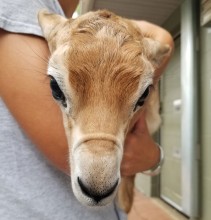 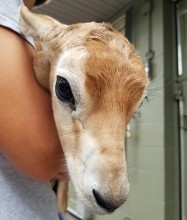