Small Mammal House keepers at Smithsonian’s National Zoo are mourning the loss of Thor, an elderly male sand cat who was humanely euthanized Sept. 29 due to a recent and irreversible decline in health. He was 14 years old. In human care, sand cats have a median life expectancy of about 10 years. Their lifespan in the wild is unknown.

Prior to Thor’s arrival at the Zoo in 2013 from the Lincoln Park Zoo in Illinois, he presented with respiratory symptoms including sneezing, coughing, wheezing and mucus build up. Smithsonian’s National Zoo veterinarians prescribed medications to help alleviate these symptoms, and keepers nebulized him daily. To monitor Thor’s health, they closely tracked his daily food intake, movement and interaction with keepers and enrichment items. In early summer, Small Mammal House keepers noticed that Thor’s behavior had changed; he was lethargic and did not show an interest in food. In December 2019, a diagnostic exam performed by Zoo veterinarians revealed that Thor was experiencing kidney failure. In the months that followed, staff performed routine evaluations to monitor Thor’s overall renal function. Over time, veterinarians noted that his condition continued to worsen. Due to Thor’s poor prognosis and declining quality of life, animal care staff made the decision to euthanize him.

Small Mammal House keepers fondly remember Thor as a small cat with a big and bright attitude. As keepers made their morning rounds, Thor’s vocalizations echoed throughout the corridor where his habitat was located. When he wasn’t playing with his favorite enrichment items—catnip hidden in paper bags and cardboard boxes—he enjoyed lounging around his habitat.

Although he could be feisty at times toward his caretakers, he was very affectionate towards his exhibit mate, 6-year-old female Lulu. The pair received a breeding recommendation from the Association of Zoos and Aquariums’ Species Survival Plan, but never produced offspring.

For 7 years, Thor served as an ambassador for his species, teaching Zoo staff and visitors about the biology and behavior of sand cats, which are native to Northern Africa, Southern Asia, and the Arabian Peninsula. The International Union for Conservation of Nature considers sand cats to be near threatened; Degradation of their desert habitats is the largest threat to sand cat populations.

As a public health precaution due to COVID-19, the Smithsonian’s National Zoo and Conservation Biology Institute has updated its hours and entry requirements. The Small Mammal House is temporarily closed to enforce social distancing. For more information, visit the Zoo’s website. 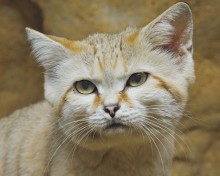