Asia Trail keepers at the Smithsonian National Zoo are mourning the loss of Remi, a 6-year-old female sloth bear who was humanely euthanized May 2, following a foot wound that was not healing despite medical treatment. In human care, female sloth bears have a median life expectancy of about 17 years.

“The care and treatment that Remi received are a testament to the passion and commitment of our dedicated team to do what was best for this sloth bear,” said Michael Brown-Palsgrove, curator of Asia Trail. “From hand-raising Remi, to facilitating several successful social introductions with other bears, to diagnosing and treating her, I am grateful to our keepers, veterinarians and consultants who did all they could to provide her with a happy and healthy life.”

Remi was the only surviving cub of three born to female sloth bear Khali Dec. 29, 2013, at the Zoo. It is always preferable for cubs to be raised by their mothers, but that was not possible given Khali’s inability to care for her offspring. Keepers knew the only way that Remi had a chance to survive was to hand-raise her. A team of keepers and veterinarians, with the help of Zoo nutritionists, immediately stepped up as surrogates. Over time, the Asia Trail team introduced Remi to the Zoo’s other sloth bears for companionship and behavioral development.

Keepers fondly remember Remi as a smart bear with a big personality and a great sense of humor. She especially seemed to enjoy playing a game of “peek-a-boo” with her keepers, placing a piece of cloth enrichment over her head and blowing it toward the mesh at them.

Remi participated in the Association of Zoos and Aquariums’ Species Survival Plan for sloth bears. Although she was paired with the Zoo’s 5-year-old male, Niko, Remi never gave birth to any cubs. She served as an ambassador for her species, teaching Zoo scientists, animal care staff and visitors about the behavior and intelligence of sloth bears. Recently, Remi helped bolster the wider zoo community’s knowledge about sloth bear intelligence. She participated in a cognition study that found sloth bears have the ability to recognize 2D images of food as representations of their 3D counterparts.

Sloth bears are not related to sloths but were given that moniker by English settlers who named them due to their dark, shaggy coat and long claws. A gap in the bears’ teeth enables them to suck up ants, termites and other insects. Native to India, Sri Lanka and Nepal, sloth bears are considered vulnerable to extinction by the International Union for Conservation of Nature. Fewer than 20,000 remain in these countries due to habitat destruction and increased agricultural activity.

As a public health precaution due to COVID-19, the Smithsonian’s National Zoo and Conservation Biology Institute is temporarily closed to the public. Upon reopening, visitors to the Asia Trail habitat can view the Zoo’s male sloth bear, Niko. 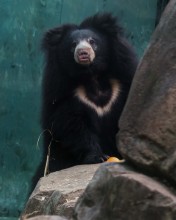