For the first time in 16 years, Smithsonian’s National Zoo is celebrating the birth of golden-headed lion tamarin twins. Small Mammal House keepers reported for duty the morning of Oct. 7 and observed that 4-year-old mother Lola had given birth overnight and was caring for two infants. Earlier this year, she and the twins' 7-year-old father, Coco, were recommended for breeding as part of the Association of Zoos and Aquariums’ Species Survival Plan (SSP). These babies are the first offspring for both parents. Zoo visitors can view the golden-headed lion tamarin family at the Small Mammal House.

Animal care staff closely monitor the family visually but leave Lola and Coco to bond with and care for their infants without interference. Keepers have observed Lola carrying and nursing the babies, which appear to be healthy and strong as they hold on to Lola as she explores their habitat. Because Lola is cradling the infants close to her body, it may be some time before keepers can determine their sexes.

The SSP scientists determine which animals to breed by considering their genetic makeup, health and temperament, among other factors. Kenton Kerns, assistant curator of the Zoo’s Small Mammal House, is the Studbook keeper for this species. Kerns and keepers describe Lola as an outgoing and curious golden-headed lion tamarin who seems to enjoy interacting with enrichment toys and puzzle feeders. Coco tends to be more shy and reserved, though he has been more outgoing since the pair were introduced in April. Initial “howdy” introductions between Lola and Coco went well, and the pair bred soon after meeting.

As part of the Zoo's positive reinforcement training program, Lola is trained to climb upon a scale on keepers’ cue so they can monitor her health. A recent increase in weight confirmed to keepers that she was pregnant. Over the years, the Small Mammal House has celebrated 26 golden-headed lion tamarin births. 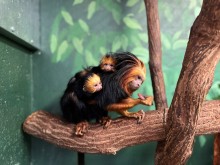 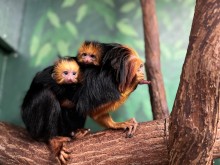