Cheetah Conservation Station keepers at the Smithsonian’s National Zoo are celebrating the arrival of a male lesser kudu calf, who was born Oct. 14 to 5-year-old mother Rogue and 9-year-old father Garrett. During their routine animal health assessments, keepers found that Rogue had given birth and observed the calf nursing, moving well and exploring his environment. A neonatal veterinary exam the following day, Oct. 15, found the calf to be healthy and strong. He is steadily gaining weight, growing from about 13 pounds at the time of his exam to about 19 pounds at 9 days old.

Animal care staff are allowing the calf to bond with mom in a quiet enclosure behind the scenes. His 10-month-old brother, Kushukuru, was present for the birth and continues to spend evenings with the calf and their mother. The younger kudu will make his public debut later this fall, weather permitting.

Keepers describe the calf as bold and alert, and they are looking forward to watching the young brothers explore the habitat, chase one another and spar with each other and their father. The Zoo will provide details about the calf’s debut on its Facebook, Instagram and Twitter accounts as the date approaches. Meantime, visitors can view Garrett and Kushukuru at the Cheetah Conservation Station, along with two Abyssinian ground hornbills named Karl and Karoline that share their habitat.

Rogue arrived at the Zoo in October 2016 from the St. Louis Zoo in Missouri, per a recommendation to breed with Garrett. Most of the Zoo’s animals participate in the Association of Zoos and Aquariums’ Species Survival Plan (SSP). The SSP scientists determine which animals to breed by considering their genetic makeup, nutritional and social needs, temperament and overall health. This is the second calf for both Rogue and Garrett.

Native to arid and semi-arid areas of northeastern Africa, including parts of Ethiopia, Somalia, Kenya, Sudan, Uganda and Tanzania, lesser kudu are listed as near threatened by the International Union for Conservation of Nature. Lesser kudu number about 100,000 in the wild, but the population is decreasing due to habitat loss from human and livestock expansion, hunting and disease.

Caption: Lesser kudu female Rogue with her newborn male calf behind the scenes at the Zoo’s Cheetah Conservation Station. 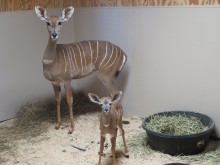 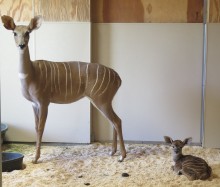