Myanmar Is One of the Most Forested Countries in Southeast Asia, Providing Habitat For Endangered Species
May. 18, 2017

The loss of intact forest cover in Myanmar has accelerated over the past decade, according to a study by Smithsonian Conservation Biology Institute (SCBI) scientists and partners published May 17 in PLOS ONE.

Due to its long political and economic isolation, Myanmar has retained much of its original forest cover, but much of the intact forest is unprotected and increasingly subject to pressures from rapid political and economic changes in the country. For example, areas that were inaccessible due to armed conflicts between the government and ethnic groups are starting to open up for timber production and commercial plantations. To investigate changes to forest cover, the paper’s authors used Landsat satellite images to map forest cover in Myanmar between 2002 and 2014.

“We found that forests cover 63 percent of Myanmar, making it one of the most forested countries in the region,” said author and head of SCBI’s Conservation Ecology Center Peter Leimgruber. “However, severe logging, expanding plantations and degradation pose increasing threats. Only 38 percent of the country’s forests can be considered intact with canopy cover greater than 80 percent.”

In terms of conservation efforts and protection of endangered species, intact (un-fragmented) forests are the most valuable. During the study period, the authors found that Myanmar’s intact forest declined by 11 percent (more than 2 million hectares) with an annual loss of 0.94 percent. Through their analyses the authors also identified nine township hotspots of deforestation of intact forests and a large area 6.1 million hectares of intact forest in northern Myanmar.

The authors suggest that protection of intact forests should take priority, but other ways of improving forest management could include encouraging forest restoration and reclaiming degraded forestlands for plantations and sustainable agriculture.

SCBI plays a leading role in the Smithsonian’s global efforts to save species from extinction and train future generations of conservationists. SCBI spearheads research programs at its headquarters in Front Royal, Virginia, the Smithsonian’s National Zoo in Washington, D.C., and at field research stations and training sites worldwide. SCBI scientists tackle some of today’s most complex conservation challenges by applying and sharing what they learn about animal behavior and reproduction, ecology, genetics, migration and conservation sustainability. 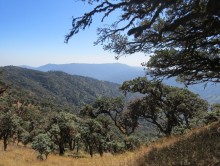