In recent decades, global forest tree growth has dramatically slowed the pace of atmospheric carbon dioxide (CO2) accumulation and climate change by absorbing about 20% of anthropogenic, or human-caused, emissions and sequestering this carbon (C) in wood. Published today in Nature, new research by the Smithsonian’s National Zoo and Conservation Biology Institute (NZCBI) and partners reveals current models do not accurately account for the consequences of rising spring temperatures on stem growth and are overly optimistic about the potential of temperate deciduous forests to take more carbon out of the atmosphere than release it in the future, a critical process called carbon sink (C sink).

“It has previously been believed that warming springs would increase the temperate deciduous forest C sink, but our research shows the main effect of warming temperatures is less growth under hot summers, contributing to less C sequestration and therefore an increase in climate change,” said Kristina Anderson-Teixeira, a forest ecologist at NZCBI and the Smithsonian Tropical Research Institute and senior author of the study. “While temperate deciduous forest conservation and restoration are essential to protect against the worst climate change scenarios, we can’t rely on these forests to reduce global warming as much as we had expected. This adds to the urgency of reducing fossil fuel emissions, critical to the future of forest health and life on a sustainable planet.”

In temperate deciduous forests, warmer spring temperatures generally lengthen the period over which trees have photosynthetically active leaves and absorb and release CO2. Current terrestrial ecosystem models represent warm springs and longer growing seasons as contributing positively to forest CO2 uptake and woody growth, resulting in a cooling effect and offsetting global warming. Model representation of C allocation to stem growth does not capture known decoupling of stem growth from photosynthate production. As a result, the consequences of rising spring temperatures on stem growth may not be accurately represented in models.

As part of this study, researchers evaluated how spring temperatures affect the timing, rates and annual increments of stem diameter growth of temperate deciduous trees across eastern North America. Using dendrometer band measurements from trees across two forests, researchers found warmer spring temperatures shifted stem diameter growth of deciduous trees earlier but had no consistent effect on peak growing season length, maximum growth rates or annual growth. The latter finding was confirmed on the centennial scale by 207 tree-ring chronologies from 108 forests across eastern North America, where annual ring width was far more sensitive to temperatures during the peak growing season than in the spring.

5. Faculty of Forestry and Environmental Management, University of New Brunswick

6. Department of Earth and Spatial Sciences, University of Idaho

The Smithsonian’s National Zoo and Conservation Biology (NZCBI) Institute leads the Smithsonian’s global effort to save species, better understand ecosystems and train future generations of conservationists. Its two campuses are home to more than 2,000 animals, including some of the world’s most critically endangered species. Always free of charge, the Zoo’s 163-acre park in the heart of Washington, D.C., features 1,800 animals representing 360 species and is a popular destination for children and families. At the Conservation Biology Institute’s 3,200-acre campus in Virginia, breeding and veterinary research on 200 animals representing 20 species provide critical data for the management of animals in human care and valuable insights for conservation of wild populations. NZCBI’s 305 staff and scientists work in Washington, D.C., Virginia and with partners at field sites across the United States and in more than 30 countries to save wildlife, collaborate with communities and conserve native habitats. NZCBI is a long-standing accredited member of the Association of Zoos & Aquariums.

Caption: A tree sports a metal dendrometer band, which Smithsonian’s National Zoo and Conservation Biology Institute scientists use to measure tree growth at the ForestGEO plot in Front Royal, Virginia. 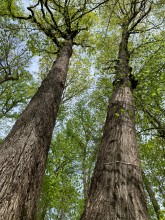 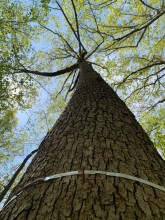 May. 23, 2022
Meet the Researchers Working to Save Wood Turtles
Jan. 31, 2022
Landmark Study Demonstrates Cultural, Ecological and Economic Benefits of Tribal Bison Restoration
Sep. 20, 2021
How I Study Elusive Prairie Bobcats
Sep. 10, 2021
Learning About Swift Foxes from What They Leave Behind