Scientists Freeze and Thaw Coral Larvae for the First Time

Breakthrough Could Help Save Coral Reefs From Extinction
Oct. 24, 2018

For the first time, scientists at the Smithsonian Conservation Biology Institute (SCBI) have successfully cryopreserved (or frozen) and thawed coral larvae from the mushroom coral (Fungia scutaria). They published their findings today, Oct. 24, in Scientific Reports. This breakthrough will allow scientists to biobank coral in its early developmental stages. In addition, these larvae can be thawed and settled at any time of the year, rather than only during the once-yearly spawning period. By banking coral larvae, conservationists can safeguard at-risk species and their genetic diversity and prevent extinctions, thus making it possible to bolster the genetic pool and health of wild populations years—or even centuries—later. This is a major step forward in the ability to conserve the biodiversity of the world’s coral reefs.

“If we combine biobanking with other conservation efforts to help corals recover from bleaching, we might be able to give them a real fighting chance at survival—and potentially even help them adapt to changing oceans,” said Jonathan Daly, lead author on the paper and post-doctoral fellow at SCBI and the Hawaii Institute of Marine Biology. “Innovative technology like this is going to be crucial to saving the biodiversity of corals worldwide.”

Successful cryopreservation of an embryo requires two important steps. First, scientists must thaw the embryo at a rate faster than it was frozen. Second, they must distribute an antifreeze (or cryoprotectant) solution throughout the embryos to stop the growth of ice crystals in the tissues. Ice behaves like pins in a balloon, rupturing the membrane and causing the embryo to fall apart. Non-mammalian embryos, such as fish, birds and corals, are very large, thus making them extremely difficult to thaw quickly to avoid ice-crystal formation.

The researchers overcame these obstacles by using gold nanorod particles and an infrared laser to warm larvae at millions of degrees per minute. Gold nanorods are tiny cylinders of gold that convert absorbed light (from a laser, for example) into heat. The study’s authors surrounded the coral larvae with cryoprotectant and nanogold particles. The gold particles transferred heat uniformly throughout the larvae when hit with a laser, speeding up the thawing process and, in combination with the cryoprotectant, preventing the formation of lethal ice crystals.

Larvae that underwent the new warming process went on to develop and swim for at least 12 hours after thawing. The team of biologists and engineers are now developing ways to make this process faster so that hundreds of thousands of larvae can be cyropreserved and thawed within a short period of time—moving the cryopreservation and laser-warming process from small to large-scale—to help augment rapid reef restoration efforts.

“This is one of the breakthroughs we have been working towards for coral reefs,” said Mary Hagedorn, coral biologist at SCBI and one of the authors of the paper. 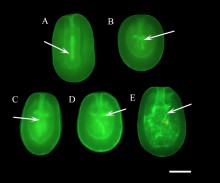 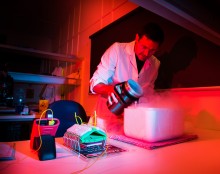