Staff at the Smithsonian’s National Zoo and Conservation Biology Institute are mourning the loss of Calli, a female California sea lion, who died Sept. 7. She was 17 years old. The median life expectancy for California sea lions is 15 to 20 years.

American Trail keepers trained Calli to voluntarily participate in radiographs and ultrasounds with veterinarians present as part of their routine medical care. An abdominal ultrasound in May confirmed Calli was pregnant, and animal care staff conducted subsequent ultrasounds to track the pup’s development. In July, an ultrasound confirmed late-term fetal loss had occurred. Zoo veterinarians anesthetized Calli Sept. 6 and performed a full exam to evaluate her abdomen and reproductive tract; the exam was normal and confirmed she was no longer pregnant. Later that evening, she behaved and ate normally.

The following day, Sept. 7, there was no change in Calli’s demeanor. However, when keepers conducted their routine wellness checks that afternoon, they found her deceased. Zoo pathologists performed a necropsy on Calli, which revealed lesions in her gastrointestinal tract and respiratory system. A full pathology report will provide more information in the coming weeks.

Calli was born in the wild in 2005. When she was just a few days old, her mother died after ingesting domoic acid, a toxin produced by marine algae. Pollution from fertilizer runoff and warming ocean temperatures can cause an overgrowth of algae, also known as a “bloom.” When crustaceans, fish and shellfish ingest an abundance of algae, their levels of domoic acid increase. Animals that then consume this prey may become ill or die from amnesic shellfish poisoning.

Calli was rescued and hand-raised by people, and she came to the Zoo in 2006. She participated in the Association of Zoos and Aquariums’ Species Survival Plan (SSP) for California sea lions, which aims to maintain a healthy, genetically diverse and self-sustaining population in human care. The SSP manager chooses which animals to breed by considering their genetic compatibility, personality, health and temperament, among other factors.

Calli received an SSP recommendation to breed with a male named Jetty, who was in residence at the time but later moved to Queens Zoo in New York. The pair produced two pups. In summer 2016, Calli birthed Catalina who, at that time, was the first sea lion pup born at the Zoo in 32 years. In June 2019, Calli gave birth to another female pup named Celia. Zoo visitors can view Celia and two adult female sea lions, Summer and Sidney, at the American Trail exhibit.

Keepers fondly remember Calli’s calm and accepting personality. She seemed to be the leader of the Zoo’s colony, and wherever Calli went, the other sea lions followed. When Calli was younger, one of her favorite enrichment activities was playing with a small white tub, which she would flip upside-down and wear on her head while she swam around the habitat. As an older adult, she was not as enamored with enrichment items; rather, she preferred to interact with her offspring. Keepers describe her as a protective, attentive and caring mother. As an ambassador for her species, Calli taught Zoo staff and visitors alike about sea lion biology, behavior and socialization. The story of how she was orphaned also served as an important example of how human actions can negatively affect sea lions and other marine mammals.

Native to the West Coast of North America, California sea lions range from Baja, Mexico, to Vancouver Island, British Columbia. Though they were once hunted for their skin, the International Union for Conservation of Nature now classifies them as a species of least concern. 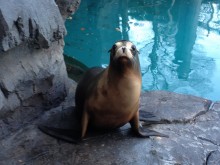