Smithsonian Conservation Biology Institute (SCBI) scientists have provided the first experimental evidence that male western white-bearded wildebeests’ rutting vocalizations are a key driver of the tightly synchronized breeding and calving in the species. They published their results, which will help develop more effective conservation strategies, July 5 in Scientific Reports.

“Approximately 500,000 wildebeest calves are born within a three-week period every year, and now we finally have an idea of how that happens,” said Allison Moss Clay, co-lead author. “Scientists have been studying them for more than 50 years, but this is the first time we’ve been able to design an experiment to test the hypothesis that mass male chorusing is a factor in breeding.”

During the three-week rutting period, males vocalize en masse at a faster tempo and more frequently than at other times of the year, and the team hypothesized that it was these vocalizations that synchronized the females’ ovulation cycles. To test this idea, 10 female wildebeests were captured from the main migratory Serengeti wildebeest population for the study and separated into two groups. The groups were completely isolated from each other and unable to hear, smell or see each other. A control group was not exposed to any male stimuli. Another group was only exposed to male vocalizations via a playback of recorded rutting calls. The researchers found that females exposed to male rutting calls ovulated at more than three times the rate of those in the control group, which under natural conditions would lead to approximately 80 percent of females mating within a three-week period.

Although the number of animals included in the study was small, the team performed additional analyses to check if the difference in ovulation rates was biologically meaningful. Specifically, they validated the experimental results by showing that predictions of birth synchrony based on the playback group closely matched the synchrony observed in a previously published study on wildebeest births.

“It’s one thing to demonstrate a difference between groups in a small dataset, but quite another for that difference to accurately predict a real-world phenomenon as complex as synchronized calving in wildebeest herds,” said Justin Calabrese, co-lead author of the study and ecologist at SCBI.

Due to their large numbers, wildebeests have a profound effect on the Serengeti. They affect the vegetation structure, fire regimes, food-web structure and the abundance of herbivores and predators. However, their numbers are decreasing throughout much of their range. The more scientists understand about the breeding strategies that help wildebeests achieve such large numbers, the more effective conservation efforts for this keystone species will be. 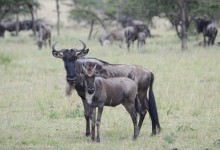