Study Finds that Wildfire in a Warming Climate Could Transform Portions of Forested Landscapes into Shrubland
Apr. 27, 2017

The ability of some conifer forests to recover after severe fire may become increasingly limited as the climate continues to warm, Smithsonian Conservation Biology Institute (SCBI) scientists found in a new study published today in Global Change Biology. Although most of these cone-bearing evergreen softwood trees are well adapted to fire, the study examines whether two likely facets of climate change—hotter, drier conditions and larger, more frequent, or more intense wildfires—could potentially transform landscapes from forested to shrub-dominated systems.

“Our study helps to identify the places that are at greatest risk of forest loss, where managers could either target management to promote post-fire forest recovery, or accept that we’re going to see some degree of landscape transformation in the coming decades and learn to meet ecological objectives under the new climate and disturbance regimes,” said Alan Tepley, a forest ecologist with SCBI and the study’s lead author.

As part of the study, scientists examined conifer forests in the richly diverse Klamath region of northern California and southwestern Oregon, sampling sites that burned severely between 1987 and 2008. They found that hardwood trees and shrubs quickly established by either re-sprouting from surviving root systems or germinating from seeds that persisted in the soil, and these plants dominated the vegetation for at least the first few decades after fire. Most conifers, on the other hand, relied on seed dispersal from trees that survived in less severely burned patches or from outside the fire perimeter.

As a result, conifers had only a few years to establish before the regenerating hardwoods and shrubs grew dense enough to keep them from further establishing. “If they miss that window there’s much less chance of successful establishment and their growth will be slower,” says study author Kristina Anderson-Teixeira, a forest ecologist at SCBI and the Smithsonian Tropical Research Institute. In fact, the study found that the longer the interval between the fire and the conifer’s establishment, the slower the tree’s growth.

Because most conifers depend on seed dispersal from surviving trees, larger patches of high-severity fire could put a growing portion of the landscape at risk of poor post-fire conifer regeneration. The study suggests this trend could be even more pronounced because under drier conditions more abundant seed sources are needed to support conifer seedlings at densities sufficient for forest recovery. In addition, previous research suggests the young, shrub-dominated vegetation that develops after severe fire tends to burn more severely in subsequent fires than older conifer forests, meaning that once severe fire converts a conifer forest to a shrub-dominated system, the non-forested vegetation could be perpetuated almost indefinitely through a cycle of repeated burning.

Still, portions of the landscape may be relatively resilient. For example, conifers were able to regenerate in wetter sites, even amid relatively large high-severity patches with few surviving trees. Researchers hope these findings could help provide information needed to prioritize management efforts. These findings could also be applied in a broader context to other forest ecosystems.

“There are concerns for much of the western U.S. and other similar landscapes that under climate change, forests may be less likely to regenerate,” said Anderson-Teixeira. “And that can then reduce forest cover on the landscape and result in big losses of carbon storage.”

According to Anderson-Teixeira, the fate of the Klamath region depends in part on societal carbon emissions, where increased emissions lead to more warming, which ultimately could result in more forest loss.

SCBI plays a leading role in the Smithsonian’s global efforts to save species from extinction and train future generations of conservationists. SCBI spearheads research programs at its headquarters in Front Royal, Va., the Smithsonian’s National Zoo in Washington, D.C., and at field research stations and training sites worldwide. SCBI scientists tackle some of today’s most complex conservation challenges by applying and sharing what they learn about animal behavior and reproduction, ecology, genetics, migration and conservation sustainability.

Additional authors on this paper are Jonathan Thompson from Harvard Forest and Howard Epstein from the University of Virginia. 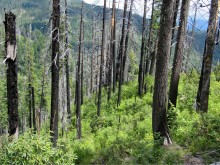 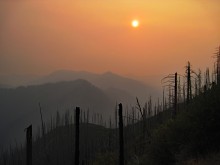