Animals Primarily Killed for Their Skin and Meat
Mar. 13, 2018

Scientists at the Smithsonian Conservation Biology Institute (SCBI) have found that poaching is an emerging crisis for Asian elephants in Myanmar. They published their findings today, March 13, in PLOS ONE.

Researchers first became aware of the crisis while conducting an unrelated telemetry study in which they fitted 19 Asian elephants with satellite GPS collars to better understand elephant movements and reduce human-elephant conflict. Seven of those 19 elephants were poached within a year of being fitted with the collars. The findings suggest that human-elephant conflict, which was thought to be the biggest threat to Myanmar’s wild elephants, may be secondary to poaching. And conservation efforts to help the 1,400 to 2,000 wild elephants in Myanmar should prioritize anti-poaching efforts.

“Poaching has suddenly become a much bigger threat to Asian elephants, especially in Myanmar, than we realized,” said Christie Sampson, lead author of the paper, doctoral student at Clemson University and SCBI doctoral fellow. “The biggest difference is that elephants in Myanmar are now being targeted for their skin and meat. That means there is no discrimination between males, females or calves. And that could potentially have dire consequences for elephants, who reproduce very slowly.”

Observations and discoveries from SCBI’s partners on the ground in Myanmar found further evidence of large-scale poaching. In less than two years, they confirmed that at least 19 elephants, including the seven with satellite GPS collars, were poached. And systematic surveys showed an additional 40 poached elephants were found across the southern central region of the country.

“SCBI has been studying elephants in Myanmar for decades, but this is the first time we have seen poaching of this scale in the country,” said Peter Leimgruber, co-author and head of the Conservation Ecology Center at the Smithsonian Conservation Biology Institute. “The next steps for us will be to continue to track and monitor elephants, while working with our partners and local communities to help stop poaching.”

Unlike African elephants, Myanmar’s elephants are being targeted by poachers for their skin instead of ivory. In Asian elephants, only males have tusks, which can vary in size.

“We do not know much about the illegal markets for non-ivory elephant products, but elephant skin appears to be used as a medicinal product,” said John McEvoy, co-author and SCBI ecologist who recently returned from a collaring mission in Myanmar. “It is also used to make furniture and jewelry. Elephant trunks and genitalia appear to be used for the meat trade.”

Reports from the government of Myanmar show that poaching is on the rise in the country. During 2016, 25 elephants were poached. In the preceding five years, 61 elephants had been poached. Myanmar is one of the last remaining countries in Asia with large habitats capable of supporting elephant populations.

The Smithsonian Conservation Biology Institute plays a leading role in the Smithsonian’s global efforts to save wildlife species from extinction and train future generations of conservationists. SCBI spearheads research programs at its headquarters in Front Royal, Va., the Smithsonian’s National Zoo in Washington, D.C., and at field research stations and training sites worldwide. SCBI scientists tackle some of today’s most complex conservation challenges by applying and sharing what they learn about animal behavior and reproduction, ecology, genetics, migration and conservation sustainability. 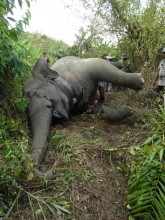 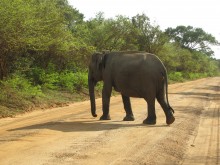 Asian Elephant Conservation
Asian elephants face critical threats throughout their range. Through satellite tracking and conflict management, scientists are working to save them.