As global warming, acidification and disease threaten a healthy future for the world’s coral reefs, conservationists in recent years have turned to the lab to study advanced reproductive methods, especially cryopreservation—or the freezing of coral eggs, sperm and other material—as a tool to produce coral larvae. A new paper from the Smithsonian Conservation Biology Institute (SCBI) and partnering organizations is the first to determine how conservationists can use cryopreserved sperm to rear coral in much higher numbers for large-scale restoration efforts in the future.

“This is the first major step from a laboratory setting toward getting these corals out on the reef,” said Mary Hagedorn, SCBI research scientist and lead author on the paper, published Oct. 31 in the journal Scientific Reports. “In our previous work, we focused on producing small experimental samples, but for effective conservation we need to be able to produce tens or hundreds of thousands of larvae that can survive to the settlement phase, and, we hope, beyond. This is critical proof that we will be able to take these techniques out of the lab and scale them up in a way that may allow us to effectively rebuild coral reefs in the case of collapses.”

The study, which involved SCBI partners Hawaii Institute of Marine Biology, Australian Institute of Marine Science and the Taronga Conservation Society Australia, examined small- and large-scale techniques for using frozen sperm to fertilize fresh eggs from two fast-growing, reef-building species, the purple-tipped acropora (Acropora tenuis) and milli staghorn coral (A. millepora) in Australia. The Acropora group of coral is one of the most widespread and responsible for much of the large-scale reef building, yet this group is also among the most threatened.

In addition to determining how to produce coral larvae at a larger scale with cryopreserved sperm, the study is also the first to find that coral larvae produced with frozen sperm is just as successful in reaching the life phase when it metamorphoses from a free-swimming larva into a single polyp or settled “teenage” or “juvenile” coral. The researchers found that this was true even using sperm that had been frozen for two years and transferred from one place to another over hundreds of miles.

To date, scientists have placed sperm from 16 species of coral from around the world into frozen repositories. Because the banked cells are alive, researchers can thaw the frozen material one, 50 or, in theory, even 1,000 years from now to help restore a species or diversity a population. Done properly over time, samples of frozen material can be reared and placed back into ecosystems to infuse genes into natural populations thereby helping to enhance the health and viability of wild stocks.

Hagedorn said the next step is to put the settled coral out in a “nursery setting” in the ocean where it is protected but has access to natural water flow, natural light and natural food resources. Then the team hopes to get permission to create such a nursery off the coast of Lady Elliot Island, the southernmost part of the Great Barrier Reef, where warming and bleaching may have less of an impact because of the cooler waters there.

“We hope to put these out on a large enough scale that we’d have thousands of coral growing over the next five years,” Hagedorn said. “Ultimately we want to prove that cryopreserved material can produce healthy, mature individuals that are capable of reproduction. Science is one step at a time and this study gets us much closer to that success.”

These fundamental research studies, which may support later restoration efforts, are important because coral reefs are living, dynamic ecosystems that provide invaluable services: they nurture more than a quarter of all marine life, provide natural storm barriers for coastlines and maintain livelihoods by adding more than $300 billion annually to the global economy. Yet coral reefs are disappearing rapidly. Locally, reefs are damaged by pollution, nutrients and sedimentation from poor land-use, fishing and mining. Globally, increased greenhouse gases are warming and acidifying oceans, making corals more susceptible to stress, bleaching and newly emerging diseases, causing a widespread reef crisis. 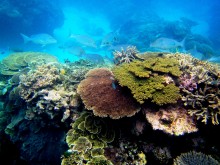