Great Cats keepers at the Smithsonian’s National Zoo are celebrating the birth of a Sumatran tiger, a critically endangered species. The cub’s mother, 8-year-old Damai, gave birth at 4:17 p.m. July 11. Keepers watched the birth via a closed-circuit camera and continue to closely monitor the cub, which appears to be nursing, moving and behaving normally. Animal care staff are allowing Damai and the cub time to bond, so it may be some time before veterinarians can determine the cub’s sex. This is the second litter for Damai but the first for the Zoo’s 13-year-old male, Sparky.

“This is such an exciting time for us, not only because we have a cub who appears to be doing great, but also because this animal’s genes are extremely valuable to the North American population,” said Craig Saffoe, curator of the Great Cats habitat. “Now that we have had success breeding Damai this year and in 2013, it means that the keepers’ patience with the introduction process, their willingness to study the cats’ behaviors and learn from them and our discussions with colleagues here and at other institutions has paid off. The result is this amazing little cub.”

Keepers began monitoring Damai closely after she bred with Sparky in late March. When she did not enter another estrus cycle and began gaining weight, it indicated to staff that she could be pregnant. Zoo veterinarians conducted an ultrasound June 8 and confirmed her pregnancy. In the past few days, Damai has been restless and showed little interest in food; these behaviors signaled to keepers that birth was imminent.

The cub will not be on view for several months until it has completed a series of health exams, received all necessary vaccinations and successfully passed a swim test. Damai and the cub will go outside together once the Great Cats team determines they have acclimated to the yards. Zoo visitors can view Sparky and Bandar—Damai’s male offspring born in August 2013—at the Great Cats habitat.

Damai arrived at the Zoo in April 2011 from the San Diego Zoo. In July 2016, Sparky arrived from the Louisville Zoo following a breeding recommendation from the Association of Zoos and Aquariums’ Sumatran tiger Species Survival Plan. They were slowly introduced to each other beginning in September 2016. Damai and Sparky have had visual access to one another through a mesh door (called a “howdy door”). Keepers observed their reactions to determine how they might respond face-to-face. Once they showed an interest in breeding, keepers gave them an opportunity to spend time together indoors. They bred several times between February and March, and Damai conceived.

Sumatran tigers are listed as critically endangered by the International Union for Conservation of Nature. It is estimated that between 300 and 400 exist in the wild.

For decades, the Smithsonian’s National Zoo and Conservation Biology Institute (SCBI) scientists have been recognized as global leaders for their work in tiger-range countries in Asia helping to protect tigers in the wild. SCBI scientists co-host training courses for teams of frontline conservation practitioners. The course participants spent time both in the classroom and in the field, learning to use state-of-the art law-enforcement monitoring systems, and about tiger biology, law-enforcement, illegal trade and how to work with local communities. 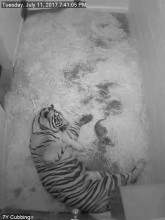 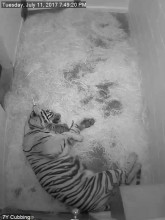 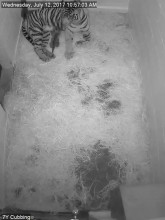 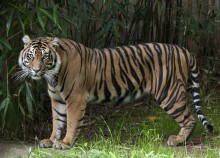