The Smithsonian’s National Zoo and Conservation Biology Institute (NZCBI) community is celebrating the arrival two female Asian elephants, 19-year-old Trong Nhi [trong-nEE] and her daughter, 9-year-old Nhi Linh [nEE-lin], to Washington, D.C. They join male Spike (41) and females Kamala (47), Swarna (47), Bozie (47) and Maharani (32) at the Elephant Trails exhibit, a habitat that includes space for socializing, training and playing while providing staff safe access to care for the animals. NZCBI received a recommendation to breed Trong Nhi and Nhi Linh with Spike from the Association of Zoos and Aquariums’ Species Survival Plan (SSP). The SSP matches individual animals for breeding in order to maintain a healthy, genetically diverse and self-sustaining population.

“Trong Nhi and Nhi Linh are not only important social additions to our herd, but also they are key to our efforts to help sustain the Asian elephant population in North America and around the world,” said Brandie Smith, the John and Adrienne Mars Director of NZCBI. “Most people will never have a chance to see Asian elephants, which are endangered, in their native countries. However, they can observe our ambassador elephants here at the Zoo, learn about them and join our conservation efforts to protect and save this species in the wild. Trong Nhi and Nhi Linh are an energetic, dynamic duo, and we’re looking forward to seeing how their relationships with our team and their future herd-mates develop.”

“Removing man-made boundaries both in the wild and the zoo world is essential for the survival of Asian elephants,” said Erik Zevenbergen, director of Rotterdam Zoo. “Therefore, we are proud of this international cooperation with the Smithsonian’s National Zoo and Conservation Biology Institute and the North American breeding program that enables us to support a healthy backup population of this endangered species in America. We are convinced that elephants need our help to survive by creating a world without boundaries to nature.”

Trong Nhi and Nhi Linh are a gift from the Rotterdam Zoo in South Holland, Netherlands. Before their departure, the elephants entered their travel crates, which were well-supplied with in-flight snacks, including hay and browse (leafy branches). An expert animal care team—including NZCBI veterinarian James Steeil and three staff from Rotterdam Zoo—monitored the elephants during their travel to ensure they were doing well. Throughout the journey, the team provided Trong Nhi and Nhi Linh with water. From Rotterdam, they traveled to Liège, Belgium, and boarded a 3,703-mile trans-Atlantic flight to John F. Kennedy International Airport in New York. NZCBI staff met the elephants and their animal care team in New York and escorted them 238 miles to Washington, D.C.

Elephant staff from NZCBI traveled to the Netherlands in September to meet Trong Nhi, Nhi Linh and their keepers. They observed how the elephants interacted with their environment and learned valuable insights into their demeanor and husbandry training. NZCBI staff noted the elephants’ dispositions were sweet and friendly, and they seemed to enjoy interacting with people. There are many similarities between the Rotterdam Zoo and NZCBI’s elephant husbandry training programs, and staff expect they will quickly pick up on the cues and signals used by NZCBI’s elephant team.

Per standard procedure, Trong Nhi and Nhi Linh will be quarantined in the elephant barn upon arriving at NZCBI. During this period, they will have access to several stalls inside the elephant barn and one off-exhibit outdoor yard. A team of keepers, nutritionists and veterinarians will care for them the entire time. Animal care staff will provide Trong Nhi and Nhi Linh with a variety of enrichment items, including browse, boomer balls and puzzle feeders to keep them active and encourage them to explore their new environment.

Following quarantine, the elephant team will begin the process of introducing Trong Nhi and Nhi Linh to their new herd members. They will conduct “howdy” introductions where the elephants can see, smell and communicate with one another through a safety barrier. The team will look for behavioral cues—including calm demeanor and movements—to determine if the elephants are comfortable enough to share a space.

Trong Nhi was born May 13, 2003, at the Rotterdam Zoo. Her daughter, Nhi Linh, was born Aug. 10, 2013, at the same facility. NZCBI will provide updates on Trong Nhi and Nhi Linh on its website and Facebook, Twitter and Instagram accounts. Visitors to the Elephant Trails habitat can view Spike, Bozie, Kamala, Swarna and Maharani on exhibit; virtual visitors can also observe them on the Elephant Cam. The new elephants will likely make their public debut in early-to-mid December.

Native to 13 countries throughout South Asia and Southeast Asia, Asian elephants are considered endangered by the International Union for Conservation of Nature. Populations are declining due to poaching, habitat loss and human–elephant conflict. Conservation scientists estimate the total population to be between 30,000 and 50,000 individuals.

Elephant Trails—where visitors can experience the sights, sounds and smells of a multi-generational Asian elephant herd—is the cornerstone of NZCBI’s campaign to save this endangered species from extinction. NZCBI’s rich history of caring for and studying Asian elephants spans more than a century.

For more than 50 years, NZCBI scientists have been at the forefront of researching and conserving Asian elephants at the Zoo and in their native habitats. Together, they are creating a comprehensive view of Asian elephant biology, behavior, reproduction, health, genetics, migration, elephant endotheliotropic herpesvirus (EEHV) and the challenges surrounding human–elephant conflict. Because of its existing relations with U.S. and foreign governments, non-governmental organizations, and major academic and zoological institutions in elephant-range countries, NZCBI is uniquely positioned to spearhead efforts that support quality life for Asian elephants in zoos and save them in the wild.

The Smithsonian’s National Zoo and Conservation Biology Institute (NZCBI) leads the Smithsonian’s global effort to save species, better understand ecosystems and train future generations of conservationists. Its two campuses are home to more than 2,000 animals, including some of the world’s most critically endangered species. Always free of charge, the Zoo’s 163-acre park in the heart of Washington, D.C., features 1,800 animals representing 360 species and is a popular destination for children and families. At the Conservation Biology Institute’s 3,200-acre campus in Virginia, breeding and veterinary research on 200 animals representing 20 species provide critical data for the management of animals in human care and valuable insights for conservation of wild populations. NZCBI’s 305 staff and scientists work in Washington, D.C., Virginia and with partners at field sites across the United States and in more than 30 countries to save wildlife, collaborate with communities and conserve native habitats. NZCBI is a long-standing accredited member of the Association of Zoos and Aquariums. 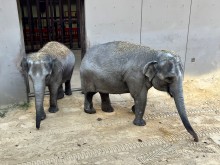